A 6-6, 225-pound righthander, Logan Gilbert was a dominant strikeout pitcher for three seasons at Stetson University in Florida. 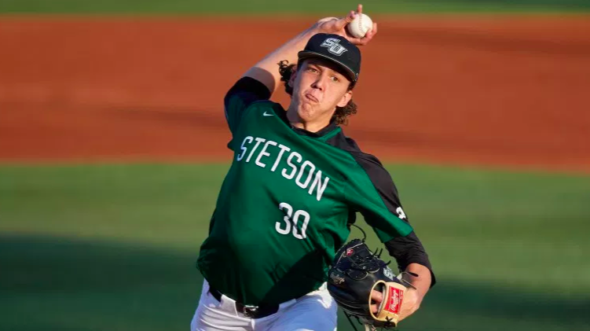 The Florida college, Stetson, that produced MLB pitchers Corey Kluber of the Indians and Jacob deGrom of the Mets provided the Mariners Monday with their first-round draft choice, 14th overall: Junior Logan Gilbert, a 6-6, 225-pound righthander who had 157 strikeouts and 23 walks in 15 starts for the Hatters of the Atlantic Sun Conference.

“Logan is a polished, accomplished college pitcher,” said Scott Hunter, Mariners director of amateur scouting. “He is a strikeout pitcher who controls the zone and wins, as evidenced by his 21-1 mark over the past two years. This is a player we felt we had no chance at, coming out of the summer. We are truly excited to add this type of talent to our organization.”

In 2017, he played as a member of the Orleans Firebirds in the summer Cape Cod Collegiate League and was was named all-league.

The Mariners have only one player on the current 25-man roster they chose as a first-round pick: C Mike Zunino in 2012. Their consistently poor draft results have the farm system ranked last in MLB and a primary reason the club has missed the playoffs for 16 years in a row.

Gilbert, 21, is the first pitcher taken with the Mariners’ top pick since the 2011 selection of Danny Hultzen of the University of Virginia. The year before, the Mariners took Taijuan Walker out of California’s Yucaipa High School. Both have been injured and are not playing this season.

A junior outfielder from University of Louisville, Josh Stowers (6-0, 205) ,was taken by the Mariners with the 54th pick.

He played high school ball at Chicago’s Mount Carmel, which won the state title his sophomore season. He hit .387 his senior year.

The draft continues with rounds three through 10 Tuesday, then Wednesday with rounds 11-40.