Thiel: Hawks need Earl more than he needs them

Thomas officially became a holdout Tuesday, and also unique in the Carroll era, because the team needs him more than he needs the Seahawks. 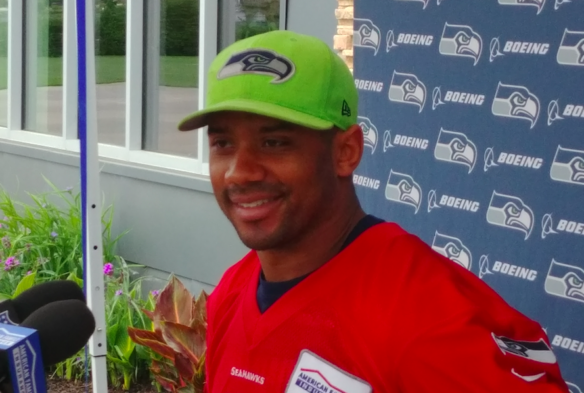 Russell Wilson doesn’t allow himself to get “crazy emotional” over the departures of teammates. / Art Thiel, Sportspress Northwest

Tuesday was the first official day of FS Earl Thomas as the Seahawks’ Object Of Controversy. As the only one among 90 players not in his assigned seat, the designation is virtually automatic. The three-day mini-camp, in which attendance is mandatory, took off without him. Pete Carroll stayed dry-eyed.

“I wish he was here,” the Seahawks coach said. “That would be nice, but we’re focusing on the guys who are here, and we’ll see how that goes.”

As the camp OOC, Thomas, who announced Sunday morning on social media that he would hold out until he received a contract extension, becomes the energy suck whose absence overshadows the action. The players don’t particularly care — the young guys at his position get the extra repetitions — and in fact are jealous of the fact that he has the leverage to mess with the team.

In the great cultural tradition of sticking it to The Man, Thomas is the anti-hero.

All but a handful of NFL players per team have no control over their professional fates, although the compensation is handsome relative to the ordinary world. Even a player as successful, celebrated and influential as CB Richard Sherman was dismissed injured. The club didn’t even seem to care that they received no compensation other than salary-cap relief for his departure.

The business is as cold as a playoff game in Green Bay.

Hey, Russell Wilson, do the losses of teammates and friends with whom you shared great success ever upset you?

“I don’t think you can,” he said Tuesday after the padless practice. “It’s the reality of the business world in general. Guys have an opportunity to move on, getting a raise or whatever the situation. Sometimes it’s just business.

“Sometimes it’s a loss. You’re happy for them, but ‘Dang, man, I wish you were still on my team.’ You say, ‘That’s a guy where we’ve done a lot of great things together.'”

Career-ending injuries are one thing. But they are an accepted occupational hazard. It’s the management decisions that cause trepidation.

“You have the unfortunate situation of getting cut or traded — those are things that happen in the real world too,” he said. “You have to understand it’s part of the business and not be crazy emotional about it. And understand that those connections and friendships are everlasting. That matters the most.”

That’s probably true personally. Professionally, the Thomas holdout, should it continue into August, strains relations personally and professionally, because his situation is unique in the Carroll era.

It’s the first time the Seahawks have been on a downward swing. They need Thomas more than he needs them.

He is to the defense what Wilson is to the offense — short-term irreplaceable. The fall-off to the next guy is steep relative to game-strategy priorities.

It’s true that they have him under contract for one more year. Most people who know him think that if Thomas returns without an extension, he will remain fully committed to the team.

“(His absence) matters, obviously,” Wilson said. “He’s one of the best players on the team. More than anything else, I know Earl knows how to prepare. Earl knows, more than most of the defensive players I’ve played against, how to be prepared.

“Hopefully we can get him out here. We have great guys who can step up. But we’re talking a Hall of Fame player.”

Wilson is not exaggerating Thomas’s value. But can Thomas maintain his preparedness, his edge, knowing he could be cut after the season like Sherman, who lost millions in his new, incentive-laden deal with the San Francisco 49ers? Or be done at 29 from freak tackles that brought down teammates SS Kam Chancellor an DE Cliff Avril?

Thomas has never before been in this situation, especially after witnessing the distressing fates of his friends, so it’s hard to predict his behavior. Keep in mind that Thomas was already obsessing about his future in December when he chased down Cowboys coach Jason Garrett in a Clink tunnel after the Seahawks beat the Cowboys.

His “come get me” remark, captured on TV cameras, was one of the more astonishing utterances in Seahawks history. When asked about it after the game, the Texas native said he didn’t mean “right now,” but only when “the Seahawks kick me to the curb.”

Thomas’s premise seemed outlandish. But in March, the Seahawks kicked Sherman to the curb.

Does Carroll think that Thomas, absent an extension, still buys into the Seahawks?

“Yeah,” he said. “Earl doesn’t know any other way. He gives you everything he’s got when he’s with you.”

That has been the case. But Thomas has never been in this place.

He knows it’s not about friendships. It’s business, and he was practicing business with Garrett.