Thiel: Seattle bids to get some World Cup action

It’s not until 2026, but work starts now for Seattle to be one of 10 U.S. cities to host matches in the World Cup awarded Wednesday to the U.S., Canada and Mexico. 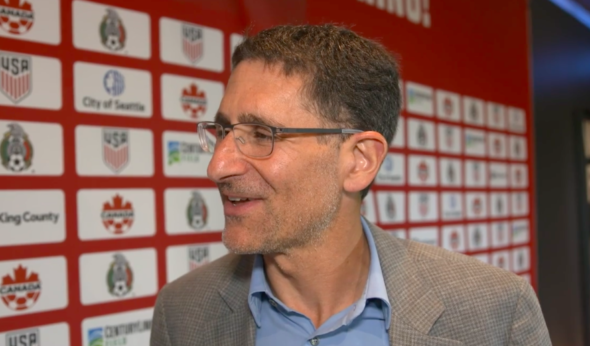 Although the outcome was long expected, Sounders owner Adrian Hanauer was thrilled with the news from FIFA Wednesday. / SoundersFC

Since we won’t know whether Seattle will host matches in the 2026 men’s World Cup until probably 2020, it’s a tad early to get lathered. What can be said with more certainty is if Seattle is one of the 10 chosen from a field of 17 competing U.S. cities, interested soccer fans should begin driving right away. They likely will make it by the opener.

“We’ll have faced all of our problems by 2026,” she said brightly. The guess is she was kidding too. These days, no one takes statements from politicians too seriously.

Really, Seattle’s mobility futility was scarcely an issue Wednesday among soccer fans, politicians and civic boosters who gathered at the Sounders’ event facility in Pioneer Square. Nor should it have been.

On the eve of start of the 2018 event in in Russia, they talked up the possibility of getting a share of the winning action to host soccer’s quadrennial orgasm. For a city without successful major professional soccer until 2009, and for a market of its size that hosts surprisingly few major national and international sports events, having a slice of the Cup would be a swift ascension to the adult table.

FIFA announced Wednesday morning that the combined bid by the U.S., Canada and Mexico won its membership vote 134-65 vote over Morocco, which might have been the greatest international mismatch since the Grand Duchy of Fenwick took on the U.S. in The Mouse That Roared.

The biggest selling point in the bid was the three nations all had existing facilities that would require no additional construction. That was a direct response to the rolling disaster in Qatar, the 2022 Cup host, where brutal conditions created by the frenzy to build stadiums in the small Middle East kingdom resulted in injuries and deaths to numerous poorly paid foreign workers.

But the selection of  “The United Bid” — a sadly ironic name for the nations whose political/business relations are currently in a state of decay thanks to President Trump —  was a next step, not a conclusion regarding Seattle.

What is known about the 2026 plan is that 60 of the event’s 80 matches (for the first time, the field will expand from 32 teams to 48) will be held in the U.S., including all matches from the quarterfinals on. Canada and Mexico will split the remaining 20.

Unsurprisingly, all did know that Seattle’s ardor for and success with soccer, plus all its other trendy coolness, should make it irresistible, regardless of any nits FIFA may pick.

“Both in terms of soccer culture and facilities, I’m very confident that we will be where we need to be in this bid,” said Durkan, an unabashed sports fan who said as a kid she attended the North American Soccer League matches of the original Sounders. “There will a lot of reasons why everyone says, ‘Look, I don’t care where else it goes in America, it has to be in Seattle.'”

Hanauer, another Seattle lifer, was evangelizing to the home crowd.

“Anyone who’s been to the Northwest U.S. and western Canada knows what an amazing part of the world it is,” he said. “The natural beauty, the culture, the inclusiveness, the sports, the opportunity, the economy.

“This is a very desirable part of the world. I think that will carry the day.”

Hanauer cautioned that he did not want to seem cocky.

“There will be a sales process; we have stiff competition,” he said. “Don’t get me wrong. I just think at the end of the day we will stand out as one of the top cities.”

According to Johnson who installs fake grass in Denver, one limitation for Seattle is an old one. Ever since the statewide vote in 1998 to fund a football/soccer stadium with artificial turf, soccer fans knew the plastic pitch would limit events with international teams, because fake fields are forbidden most everywhere in the pro soccer world.

But for tournaments and some friendlies, the Sounders have trucked in natural grass. Its temporary nature makes for seams and lumpiness. Hanauer didn’t think it would be a fatal flaw, especially with advances in technology.

“First, we’ve proven its success over time,” he said. “Second, we will have more time to prepare the field than in the past. And third,  technologies are changing; there are developments that weren’t there five years ago.

“I think it’s sort of a non-issue in terms of preparedness for us.”

The panelists also scoffed at the notion that Seattle’s location was too remote for some international travelers.

“Our logistical and transportation systems are just really sophisticated,” he said. “It’s just not that hard to get from Seattle to San Francisco, or pop around from city to city.”

What’s hard is getting from Everett or Woodinville to downtown Seattle. But that’s not his concern, nor the concern of FIFA. They want a global celebration of soccer, and Seattle wants it here.

The last mile is a trifle compared to decades of dreams fulfilled.