Thiel: WSU needs to let Leach know he messed up

Mike Leach used a fake video to make a reckless political controversy on Twitter. Time for the quivering Cougars bosses to let him know he’s not in charge ALL the time. 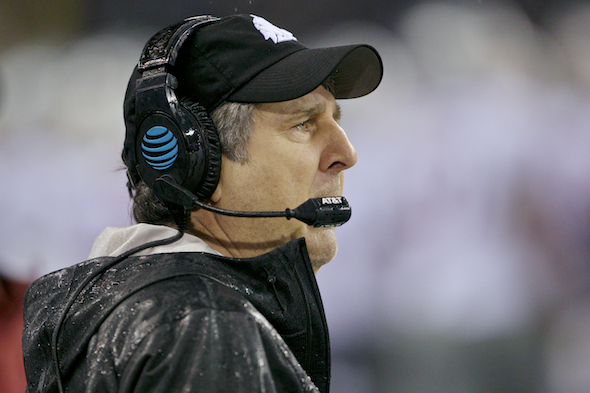 One of the bedrock admonitions of coach Bill Belichick’s reign with the New England Voldemorts is childishly simple: Do your job. An unsaid but understood part of that principle is being accountable in doing the job. If you mess up, own up. In the popular vernacular: Wear it.

Washington State football coach Mike Leach messed up. This time it has nothing to do with clock management or injury reports or long-winded ambles down the Diagon Alley of his mind.  He jumped into politics for no reason, and so far isn’t wearing it.

This episode isn’t about the advocacy and affection he has for his pal, Donald Trump. Leach is as entitled to speak up as a citizen supporting the president as much as NBA coaches Steve Kerr and Gregg Popovich are entitled to criticize him.

The problem in this case is that a college football coach, unprovoked, picked a political fight on social media with the general public using a provably false premise, then failed to own up to his judgment errors of fact and conduct.

In case you missed over Father’s Day weekend, Leach ignited a brouhaha by tweeting out a four-year-old YouTube video of a speech President Obama gave to an annual conference of world business leaders in Brussels.

But the video was manipulated by propagandists to make his message the opposite of its intent. The fake video makes it seem as if Obama told his audience, “ . . . ordinary men and women are too small-minded to govern their own affairs, but order and progress can only come when individuals surrender their rights to an all-powerful sovereign . . .”

In fact, Obama’s subject (the original document is here) was how civilization has taken centuries and many wars to approach the ideals of freedom of choice, equality and the importance of a democracy:

“But those ideals have also been tested — here in Europe and around the world.  Those ideals have often been threatened by an older, more traditional view of power.  This alternative vision argues that ordinary men and women are too small-minded to govern their own affairs, that order and progress can only come when individuals surrender their rights to an all-powerful sovereign. Often, this alternative vision roots itself in the notion that by virtue of race or faith or ethnicity, some are inherently superior to others, and that individual identity must be defined by “us” versus “them,” or that national greatness must flow not by what a people stand for, but by what they are against.”

Leach posted the propaganda video in a tweet that gave him a weak excuse to invite followers to “an open discussion” on government (ironic, because he never invites open discussion of his playcalling or use of personnel): 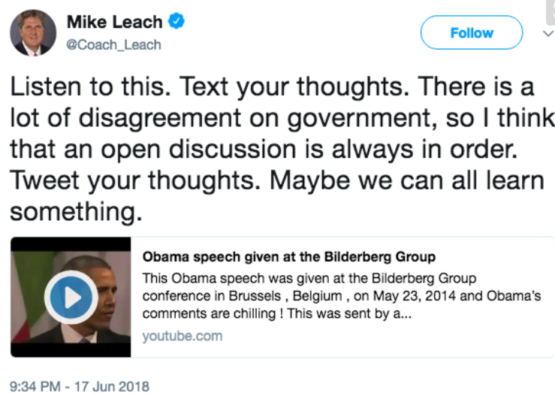 What he learned was that his followers spotted the fraud and called him out in a blizzard of tweets that went national, some of which were catalogued here by Deadspin. By Monday, when he apparently apparently grasped the fraud, he said in a tweet the video was “incomplete.”

This is the complete speech. I agree that the video was incomplete. However, I believe discussion on how much or how little power that our Gov should have is important……Remarks by the President in Address to European Youth: https://t.co/BnNzxyivyN

Leach’s original tweet since has been deleted, but his follow-up contained no apology. Nor did the Washington State administration have the stones to admonish him. A spokesman released a statement, unsigned by the president or athletics director, that read:

“As a private citizen, Mike Leach is entitled to his personal opinions. Coach Leach’s political views do not necessarily reflect the views of Washington State University students, faculty and staff.”

That profound cop-out speaks to the degree of intimidation Leach has over his employers.

It also may be a cry for help. President Kirk Schulz and athletics director Patrick Chun may be held as hostages by Leach.

It’s the only explanation for not offering a stout response, something like this:

Mike Leach engaged in inappropriate conversations on Twitter that have resulted in a controversy that is an unwelcome distraction to the university and the football program. His use of a deliberately falsified video designed to reflect poorly on a former president, apparently in an effort to stir political debate, was disingenuous and irresponsible. Once the misleading content was exposed as false, his social media responses to readers lacked candor, contrition and accountability.

These actions, while protected under the American tradition of free speech, nevertheless reflect poorly on WSU and its football program that he has otherwise led to success and honor. Since it is important that current and future students, alumni, staffers and taxpayers understand that the university does not tolerate deception in the public arena of a political nature by its employees, the university has suspended Leach for two weeks without pay. Another violation will be met with more severe sanctions.

To those suggesting any punishment is harsh, what deterrence is there in the university’s mushy non-response?  Perhaps someone in Pullman had the guts to tell Leach privately that the tweet was the stupidest stunt he’s pulled in six years, and could directly impact recruiting. But until the administration calls him out with a public sanction for his public action, Leach will continue to make himself look recklessly foolish and his bosses seem like quivering enablers.

Besides, WSU forecasts a cumulative debt in the athletic department of $68 million by the end of fiscal year 2018. A couple weeks of not paying Leach isn’t much. But it’s a start.