The parents of suicide victim Tyler Hilinski were shocked to learn their son’s brain condition was that of a 65-year-old, because of CTE. But their youngest son will continue to play. 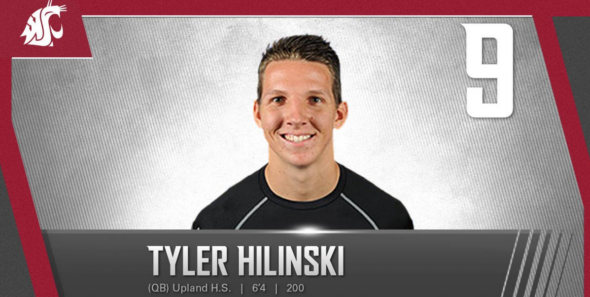 Tyler Hilinski said a blow in the loss to Arizona left him rocked. / Washington State athletics

The brain condition of a 65-year-old. In the body of a 21-year-old college athlete.

The medical discovery from the Mayo Clinic was shared on NBC’s Today show Tuesday for the first time by the parents of Tyler Hilinski, the Washington State quarterback who committed suicide by gunshot in his Pullman apartment Jan. 16.

“The medical examiner said he had the brain of a 65-year-old, which is really hard to take,” Mark told Today. “He was the sweetest, most outgoing, giving kid. That was difficult to hear.”

CTE has been found post-mortem in the brains of numerous football players. The disease was at the center of a $765 million settlement the NFL entered into in 2013 with more than 4,500 retired players who filed a class-action lawsuit. As of March, according to the Washington Post, six players who claimed neurocognitive impairment had been paid, for less than $5 million total.

The NFL has disputed a direct link between CTE and the violent collisions in football, citing hundreds of current and former players who offer no symptoms, as well as medical research on cause and effect that is less than definitive. But the trend has been sufficient to cause the NFL to continually amend its rules, starting in 2010 and up to this off-season, including controversial new limits placed on tacklers to avert head trauma.

Attempts at improving player safety are worthwhile, but they can’t fix the damage that has been done. In a Sports Illustrated documentary film/story published Tuesday with the cooperation of the Hilinski family, even his mother isn’t ready to conclude that football’s blows were a direct cause of the brain damage that seemed to lead to a death no one in either his family or his football circle saw coming.

“Did football kill Tyler?” Kym said in the documentary. “I don’t think so. Did he get CTE from football? Probably. Was that the only thing that attributed to his death? I don’t know.”

Far from condemning football, the Hilinskis’ youngest of three sons, Ryan, is continuing his football career after the diagnosis was revealed. He’s a senior, four-star quarterback at Anaheim’s Orange Lutheran High who has committed to play for the University of South Carolina.

“We got the results and didn’t just hand (Ryan) the results and say, ‘Read this,’” Kym said. “We did a lot of research. Can (CTE) be tested in the living? It can’t. Is there a genetic or hereditary link? They’re not sure. So we had to find out as much information as we could and talk to experts and then let Ryan know.”

In the SI documentary, Ryan Hilinski said he was scared and worried that he may have a similar fate, but isn’t quitting football.

“I think Tyler would want me to do the same thing,” Ryan said. “I don’t think he’d want me to stop.”

It is that sort of belief system that keeps at bay the demise of football, as well as other contact sports that are prone to head trauma, such as soccer and hockey. If the CTE-induced suicides of Junior Seau, Dave Duerson and Andre Waters had minimal impact, if the 2015 Will Smith movie, Concussion, didn’t move the needle, it’s doubtful the discovery of Hilinski’s brain condition will change things.

As a nation of risk-takers, men and women relentlessly seek out jobs in high-risk endeavors in the military, aerospace, police, fire and first-responder crews, to name just a few. The adrenal gland is a powerful thing.

The biggest differences with those enterprises and sports is that the activity is not related to preserving or enhancing community welfare, and the severity of the brain-trauma risk is often unexplained, covered up or undetected — sometimes all three.

The latter description appears to fit the disclosure by the family to SI that Hilinski told his brother he was “rocked” by a hit in 15th-ranked WSU’s 58-37 loss at Arizona in October. With the Cougars down 20-7, he came on in relief of an ineffective Luke Falk in the second quarter and threw two touchdown passes for a 27-23 lead. But he also threw four interceptions in the second half. Until Tuesday, brain damage had never been mentioned.

The family said he was upset after the loss, and was less responsive for the rest of the season, which they presumed was due football and school duties.

“The reality is that we missed it, and we let him down,” Mark Hilinski told SI, manfully taking blame where there is none.

In a text to the Seattle Times, Cougars coach Mike Leach said he didn’t recall a hard hit on Hilinski in the game, and that it’s “pretty difficult to determine with certainty” whether CTE was the cause of death, adding, “I would like to know.”

Leach was already on the defensive, texting, “Our QBs don’t get hit in practice. They get hit less than any other position.”

No coach allows QBs to be hit in practice. Besides, all it takes is one blow to lead to tragedy. It needn’t be memorable.

Maybe a kick at the bottom of the pile. Perhaps a backward fall to the ground.  Or an accumulation of small hits, including innocent helmet slaps from celebrating teammates, that add up over 10 years of tackle football.

That’s the thing with CTE. It is insidious, leaving no trails of blood or broken bone that medical science can detect or help fix. For a competitive young man desperate to please coach, teammates, family and a full stadium, a concussion is merely a temporary shadow on the mind that can be solved with more play, not less.

Much as with PTSD, the victim is the last to know, with everyone else tied for next-to-last. Mothers, tell your children.