Ten years ago Monday, the City Council made the mistake of letting go the civic asset of its NBA franchise. It likely will be another seven years before another one returns. 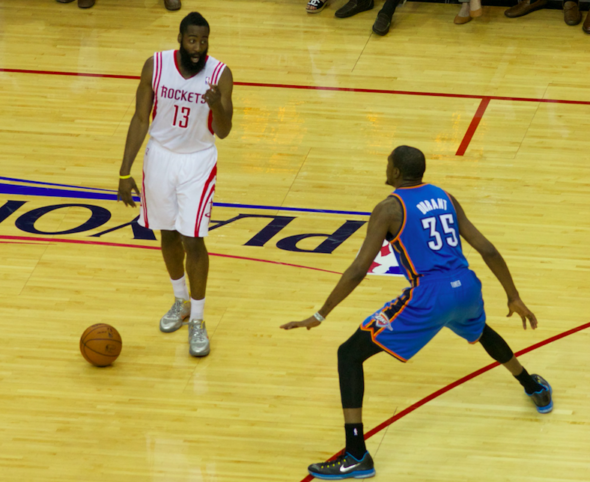 The award this week of the NBA’s Most Valuable Player trophy to Houston’s James Harden produced some locally depressing poignancy, at least if you’re in the sepia-toned crowd who remembers when Seattle had an NBA franchise.

Harden was the third member of the 2009-12 Prairie Pirates (whom some continue to call the Oklahoma Thunder) to have won an MVP award.

He follows Kevin Durant (2013-14 season) and Russell Westbrook (2016-17). In hindsight, the Pirates/Thunder accumulated a staggering amount of talent, thanks in no small part to the collapse and subsequent 2006 sellout of the Sonics franchise by owner Howard Schultz.

That the Thunder failed to win an NBA title with three of the NBA’s top 10 players is a small consolation to Seattle fans still carrying a mad-on over the hijacking. Others who should be irked are Oklahoma City fans. But they at least could enjoy a Finals appearance, four Western Conference finals and playoffs in eight of the 10 seasons in Oklahoma City.

Yes, it’s been a decade. The anniversary is Monday. There will be no balloons and cake.

On July 2, 2008,  shortly before U.S. District Court Judge Marsha Pechman was to render her verdict in the six-day trial to prevent the franchise owners from breaking their KeyArena lease two years early, Mayor Greg Nickels and the Seattle City Council caved.

Rather than playing out its strong hand in a simple landlord-tenant dispute, the city settled for $45 million from Clay Bennett and partners, mostly to pay off the mortgage on the 1995 remodel. The Sonics — who drafted Durant out of Texas with the second pick in 2007, and Westbrook out of UCLA with the fourth pick in 2008, and subsequently Harden of Arizona State with the third pick in 2009 — were gone after 41 years.

Without re-litigating the merits and demerits of the legal case and the political decision, the basketball perspective after 10 years is remarkable.

The Sonics made the playoffs in 2005, were sold in 2006 and in 2007 finished 20-62, the worst record in club history — the first of three awful seasons that produced three franchise-making players. The franchise was the NBA paradigm for tanking.

New general manager Sam Presti was given carte blanche to tear down the roster without regard to public relations and fans’ irritation. The NBA was tacitly complicit in the Seattle hoop-icide, knowing that relocation to a smaller but more desperate market was underway.

The final two ghastly years in Seattle helped bring Durant and Westbrook, and the first year in OKC, a 23-59 finish, produced Harden. Next season, the Thunder won 50 games, and by 2011-12 made the Finals, where OKC was thwarted when LeBron James won his first title with the Miami Heat.

Had the council 10 years ago not peed down its collective leg, it’s within reason to speculate that much of that hoops success could have been in Seattle.

Four months after the settlement, the nation was in the grips of the Great Recession. The economic collapse nearly bankrupted Bennett’s moneybags, natural-gas magnate Aubrey McClendon, who was down to selling off his wine collection.

It’s plausible that the panic would have forced the Okies to abandon relocation plans and sell the franchise to then-Microsoft boss Steve Ballmer, a hoop-head who in 2014 bought the Los Angeles Clippers for $2 billion.

Yes, there’s a lot of if-then in such speculation. What is more certain is that after a decade, a succession of mayors, council members and city staffers have put in thousands of hours seeking a way to make up for the 2008 mistake and return the NBA to Seattle.

Seattle has lived out one of the hoariest bromides in the sports business: To lose a franchise is much easier than to regain one.

There is, of course, a private commitment in place to try to bring back the NBA. Oak View Group of Los Angeles has committed more than $600 million to remake the 56-year-old arena into a world-class venue, an offer at least as astonishing as the growth in the past decade of the urban village that surrounds Seattle Center.

How to reconcile the parallel astonishments is the formidable task of Oak View CEO Tim Leiweke, who has a long track record of successful arena development. He has in hand a memorandum of understanding with a city council that is more than eager to get the perpetual arena/center financial headache off its agenda with the rare gift of private money for a public building.

But if Leiweke pulls off the hyper-aggressive feat to open in October 2020, the first league into the building will be the NHL, not the NBA.

The NHL was ready to expand, and did so splendidly the past season with its 31st team. The Las Vegas Golden Knights made the Stanley Cup finals. The promise from NHL owners was to keep the same expansion formula for the 32nd team, which they hope will be Seattle in 2020, for a fee of $650 million. Good news for hockey fans.

But the NBA, far more successful financially, has expressed no desire to expand with two more teams taking bites from the revenue pie. The most informed speculation is the league will not consider growing until after the 2024-25 season. That’s when its TV contracts, worth $24 billion over nine years, expire (in contrast, the NHL’s contracts over the same span with Rogers in Canada and NBC are worth a combined $7.2 billion).

Presuming an increase in broadcast/streaming revenues, plus the likely huge, one-time  fees due from the expansion-team owners, the NBA may deign to allow Seattle and perhaps Mexico City to genuflect and kiss its ring. The Seattle wait then would have lasted 18 years.

But by 2025-26, who knows about the economic/political condition of Seattle, the NBA and the nation? You may have noticed lately that forecasts for the national condition are less long term and more day to day. The 2025 horizon seems so distant, the NBA in Seattle appears as a speck.

So many unknowables have to happen in sequence — including Oak View’s willingness to sacrifice another 41-plus dates to the NBA during the more lucrative indoor-concert season that coincides with the winter-team calendars — that upon the sad anniversary, it remains difficult to visualize an NBA future.

Still, to use a phrase repeated often over the past decade, it could happen.

It’s just that things today would have been so much easier had the decision 10 years go been made to keep a civic asset, eliminating the compulsion for perpetual tail-chasing.