Lamenting of a sore back, Felix Hernandez is on the 10-day disabled list and will miss a start for the first time this season Thursday in Anaheim. 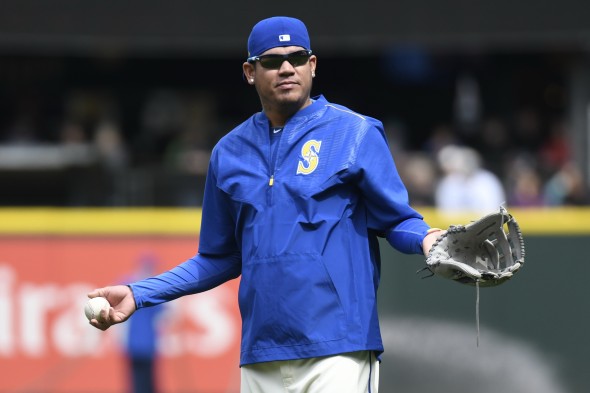 Felix Hernandez is on the disabled list with a sore back. / Alan Chitlik, Sportspress Northwest

After a half-season of good health, Felix Hernandez, 32, was put on the 10-day disabled list Tuesday with back soreness that has recently nagged him. With the All-Star break starting after Sunday, the chance to rest now might cost him only the start he was to make Thursday in Anaheim, where the Mariners begin a three-game series at 7:07 p.m. Tuesday.

He’ll be eligible to pitch again July 18. The Mariners likely will need a spot starter Thursday. Hernandez’s roster spot was taken temporarily by RHP Nick Rumbelow, a reliever called up from Tacoma, where he pitched scoreless innings in three outings since being sent down July 7.

Hernandez (8-7) apparently tweaked his back during a workout recently in Baltimore. He’s been inconsistent with his command, resulting in a 5.13 ERA in 105 innings in 19 starts, the latter tied for MLB lead. He has held opponents to three or fewer runs in his past five starts.

Perhaps looking ahead to beefing up the bench for an interleague series in Colorado, the Mariners also Tuesday called up INF/OF Gordon Beckham to replace OF John Andreoli.

The Mariners go into Anaheim at 57-34, three games behind the AL West-leading Houston Astros and 11 ahead of the fourth-place Angels (46-45), who for the month of July are last in the majors in runs with 19 — 37 fewer than the No. 1 Red Sox. The Angels are also last with 17 runs batted in and a .195 batting average.

After Anaheim, the Mariners have three in Denver before the All-Star break.