A genial guy off the court, the late Lonnie Shelton was the menace of the 1978-79 NBA champions, quick as he was strong, yet willing to defer for the greater good. 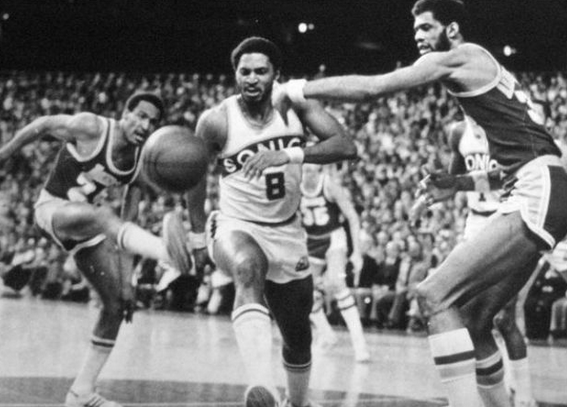 Working out at the Jewish Community Center on Mercer Island in the summer of 1978, Wally Walker recalled getting acquainted with the Sonics’ new power forward.  At 6-8 and 280 pounds, Lonnie Shelton, 23, already established his reputation in two years with the New York Knicks as a gent sufficient to make mean men quiver and fast men falter.

“To get in shape, we’d play one-on-one, full-court,” said Walker, a 6-7 forward on the skinny side. “It was a great test. But I discovered he was quicker than me. And he had me by 70 pounds.

“I never played with someone who impacted space, both his own and taking out his guy, like Lonnie,” said Sikma, seven times an All-Star in his 14 seasons. “My best rebounding years were because of him. There were so many to get because his man was never to be found.

“Some of it was laying wood and boxing out, but a good portion of it was his guy wouldn’t even try.”

Demoralizing as he was to an opponent, Shelton’s formidableness energized the Sonics to a championship. The 1978-79 NBA title was Seattle’s first in its modern pro sports history.

Now that the Sonics are 10 years gone and Seahawks drama gobbles up attention locally and nationally, recollections fade. Youngsters and newcomers are oblivious.

So upon Shelton’s death Sunday at 62 from problems following a May 5 heart attack, it seems worthy to pull up a stool and revisit the NBA before there was Michael Jordan, Larry Bird and Magic Johnson, and before more than one game a week was nationally televised.

Dwelling in Northwest obscurity and muffled by his own deferential personality, Shelton and the Sonics had been on the margins then, and now are artifacts. But at the franchise’s first peak, when they reached consecutive Finals against the Washington Bullets in 1978 and 1979, losing the first and winning the second, they had eye-catching performers who blended seamlessly.

Shelton was a revelation. Acquired as league-dictated compensation for the loss to the Knicks of free agent center Marvin Webster — a system well worth a re-visit — he gained the starting lineup in December when center Tom LaGarde went down with a season-ending knee injury. Sikma moved into the post, Shelton opened at power forward and in six months, the Sonics were champions.

Asked for a contemporary comparison to Shelton, teammates Sikma and Walker, who’ve stayed involved the game since, in separate phone interviews went right to the top: LeBron James.

Both understand that Shelton’s 10-year career with three teams produced modest career averages of 12 points and six rebounds, along with a single All-Star Game appearance. But Shelton played with the same overwhelming physical prowess as does James, particularly on defense, where the late-70s Sonics excelled under coach Lenny Wilkens.

“He was a guy who had no on-court weaknesses,” Sikma said. “He could shoot, put the ball on the floor, rebound and play defense. He had an explosive first step; he’d get the slightest edge, and he was by you.

“On defense, he had plenty of fouls, but he always got his money’s worth. He kept the refs’ attention on him and freed the rest of us a little. He could get double-figure scoring every night, but we might have needed his defense on a particular matchup, and he always provided.”

Walker remembered a night when Shelton was all offense, but only because his teammates felt obliged to provoke him. In Boston against the Celtics and their legendary front line of Larry Bird, Kevin McHale and Robert Parish, Walker, knowing Shelton would be matched against McHale, began humming loudly on the bus the theme song from the goofy 1960s’ TV sit-com McHale’s Navy.

Soon most of the bus picked up on it, and began singing.

“Lonnie kept getting madder and madder, but he never said anything,” Walker said. “We got off the bus at Boston Garden and he was in a rage. He killed McHale with 37 points and we won.”

For the opponent, provocation was never wise. During a game in the Kingdome, Steve Mix irritated Shelton sufficiently for him to throw the ball at the enforcer for the Philadelphia 76ers.

“You know the sound a pumpkin makes when it hits the concrete?” Walker said. “That’s what it sounded like when the ball hit Mix in the back of the head, only it went 20 feet in the air.

“Mix turned around to confront the thrower, but when he saw it was Lonnie, he dropped his hands and said, ‘OK’.”

Shelton’s main vulnerability was a lack of personal discipline. He was sometimes late for practices and planes, provoking fines and suspensions. Belying his court menace was a genial, humorous nature that included an inability to say no to people who deserved it.

His weight was a lifetime issue. He was traded in 1983 to Cleveland, where he spent his final three NBA seasons trying, mostly unsuccessfully, to stay under 300 pounds.

“He was  good-hearted, generous guy — maybe to a fault,” Walker said.

Over the past 30 years, the Bakersfield, Calif., native and Oregon State star was rarely seen in Seattle, even when one of his five sons, Marlon, played for the Washington Huskies from 1998 to 2003. In 2004, Walker, who was president/CEO of the Sonics at the time, invited Shelton to the 25th anniversary reunion of the title team. Shelton declined, saying he wasn’t comfortable.

Now he will miss the 40th anniversary party next year. All-Star guard Dennis Johnson, 52, died in 2007. John Johnson, 68, credited with the development of the point forward position, died in 2016.

“It’s too bad that death has to be why these fond memories come up, but that’s the way it is,” Sikma said. “It is still amazing how we went from 5-17 (the record in 1977 when Wilkens replaced Bob Hopkins as coach) to two Finals and a championship.

“I think most of the league liked us as a team. We didn’t have one dominant player, we  worked together well. Lonnie was the epitome of that. When some guys suck the air out of a room, he did his job and asked no questions.”

The league did indeed like the Sonics, only not enough to keep them in Seattle. Would that it could come to pass that Lonnie Shelton once again had a ball in his hands and David Stern in his sights.