A social media blitz by the Mariners helped Jean Segura top the five-player field to be the 32nd player named to the American League All-Star team, a club first. 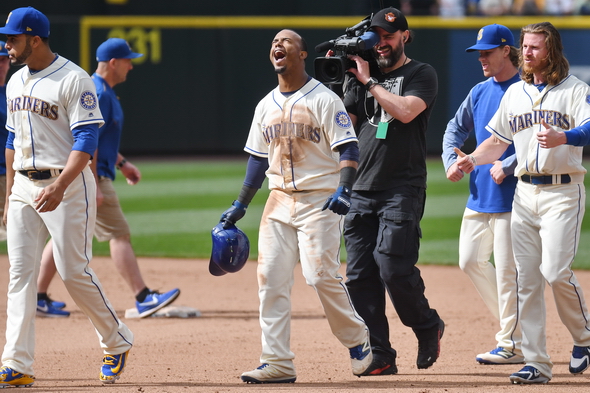 Jean Segura was nearly as happy with a walk-off homer as he was Wednesday when he learned he was an All-Star./ Alan Chitlik, Sportspress Northwest

Mariners fans have to hope the franchise is as good at baseball as it is at social media. The abrupt campaign to get out the vote for SS Jean Segura as the fan-selected 32nd player for the American League’s All-Star team worked brilliantly.

The 32nd-player vote has been around since 2002, but this was the first time the Mariners had a candidate. Since there are no limits to the frequency of voting, the marketing department began a blitz Sunday using all sorts of social and broadcast media platforms, which included prizes and giveaways, to help give Segura, 28, his second All-Star berth and first in Seattle. His first was in 2013 with Milwaukee.

Entering Wednesday night’s game in Anaheim against the Angels, Segura was hitting .329 with seven home runs and 14 stolen bases. Sunday he voiced his dismay at not being selected, but the vote changed dramatically his mood.

“To be honest, it surprised me,” Segura told MLB.com.  “I feel really good. I feel proud the way my teammates have supported me along with the fans in Seattle, the media, the organization. It’s really good support.”

And now, a message from the All-Star himself.

“The outpouring of support by our fan base and what the group in marketing department did to create this SeguraFest . . . I can’t say enough about how good that it makes me feel and certainly our players feel, knowing their support is there for something like this,” he told reporters. “It is awesome.”

The National League’s selection was 1B Jesus Aguilar, who did even better than Segura in the voting — 20.2 million. He beat the  Giants’ Brandon Belt, the Cardinals’ Matt Carpenter, the Dodgers’ Max Muncy and the Nationals’ Trea Turner.