Much of the Colts’ 19-17 win over the Seahawks was devoted to young players doing foolish things, but Seattle’s opening drive was exactly how Pete Carroll had fantasized. 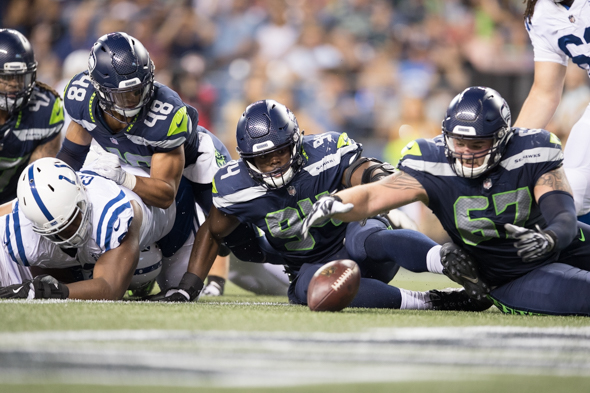 After a bad snap from Colts C Mark Glowinski, a former Seahawk, traveled 29 yards into the end zone, Seahawks DT Joey Ivie (67) fell on the ball for a touchdown. / Drew McKenzie, Sportspress Northwest

In the Seahawks’ first possession that became a 75-yard touchdown drive, 32 yards came by the run, 43 came by the pass. If you have any urgency to derive meaning from the first exhibition game, we offer that morsel as an indication that the plan to restore dignity to the Seattle ground game has taken a toddler’s step forward.

Much of the rest of Thursday night’s bumper-thumper at the Clink between the Colts and Seahawks was a Benny Hill lowlight reel, including four penalties on the Seahawks offense in three consecutive plays, and a wild snap — one of seven Indianapolis fumbles — late in the fourth quarter by the Colts that went 29 yards into the end zone.

The Seahawks recovered the passed ball for a touchdown to close the deficit to 19-17, which stood as the final score because the well of weirdness had run dry.

But the opening drive with the first unit offense was close to ideal.

Four scrimmage runs from the backs tandem of Chris Carson and Rashaad Penny, two non-panicky scrambles by QB Russell Wilson, as well as four completions in five pass attempts, including a five-yarder for a touchdown to Nick Vannett, produced a drive of balance and order largely absent from a year ago.

“A perfect start for the offense,” said coach Pete Carroll, claiming new offensive coordinator Brian Schottenheimer “mixed it just right to get us down the field. We didn’t open the playbook for this game, we just wanted to check some stuff out, hoping we’d get  a drive instead of three-and-out.

“We looked strong, right and on point.”

For the game, the Seahawks ran for 87 yards in 22 carries, including 26 on four runs by Carson. Modest, yes, but in the right direction.

Speaking of the right direction, the defensive star was the people’s choice, rookie LB Shaquem Griffin, who had six solo tackles and three assists, including a tackle for loss. The fifth-round pick came in on the second series and played much of the rest of the game.

“He was all over the field, making hits,” Carroll said. “We played him a ton. He was running and hitting just like he’s been looking in practice. Very encouraged.  I can’t tell you much until I see the film, other than he was very active.

“The young guys did really well. The draft picks were all involved with doing good
stuff tonight. They have been looking that way in practice as well, so it’s not really a surprise. It’s just really pleasing to see that it showed up game time.”

His praise included rookie pass rushers Rasheem Green and Jordan Martin, part of pressure that delivered three sacks to Colts quarterbacks, including Andrew Luck, seeing his first game action since 2016 because of a passel of injuries.

National anthem kerfuffle, year two — Seahawks DLs Quinton Jefferson and Branden Jackson and RT Duane Brown stayed in the tunnel during the anthem, per the NFL’s off-season request, to carry on the social-injustice protest from last season. But no Seahawks sat on the bench, knelt or raised fists, actions that reportedly occurred at other stadiums as the preseason got underway without a compromise that works for owners and players.

Carroll said a team meeting was held to discuss the matter.

“We chose to support every individual,” he said. “That’s how we’ve gone about it, and we’re going to continue that. There are some people that have their personal issues, and we recognize that.”

New kickoff rules — Aside from a lot of touchbacks, RB J.D. McKissic had returns for 29 and 30 yards, and WR Cyril Grayson, the former college track star, had a return of more than 50 yards wiped out by a holding penalty.

“It looked fine,” Carroll said. “I feel like there’s going to be more spacing opportunities on our returns, and it’s going to give us more chances. I thought it showed that a little bit.”

Injuries — The backup tackle depth took a hit when Isaiah Battle ( sprained knee) and rookie RT Jamarco Jones (sprained ankle) had to come out of the game, the latter on a cart. WR David Moore was hit in his facemask as he fell defenseless after a helmet hit by CB Shamarko Thomas, who was penalized and ejected. RB C.J. Prosise added another absence to a long list when a hip flexor bothered him in the final practice before the game and was held out.

Shaquem Griffin, pass coverage — It was not all roses. Whe he dropped into coverage in the first quarter, he was knocked back by a two-handed push from Colts TE Jack Doyle, who cleared space for a nine-yard reception.

Rookie CB Tre Flowers — Long and lean like Richard Sherman, Flowers started in place of injured Byron Maxwell (hip flexor) and held up, although he was caught with a pass interference penalty.

“I thought he did well,” Carroll said. “He had the one penalty with great coverage, he was there. I think he grabbed him when he didn’t even have to do it to make the play.  Stayed up on top on the deep ball, down in the end zone. I thought a pretty good first outing.”

Jon Ryan vs. Michael Dickson— The rookie may have had an edge in the punting competition. He had a solid directional punt downed at the Colts 14, and a high 55-yarder that was impressive. In the fourth quarter, Ryan had a fairly weak 38-yard punt.

Germain Ifedi vs. NFL law — A year ago, the right tackle was the Paul Manafort of football players, breaking rules in myriad random piles. But in limited action, he got away clean Thursday.