Thiel: Thomas returns; will he stay a Seahawk?

After a futile holdout, Earl Thomas returned to the Seahawks. But will he stay? Thomas may not be able to play well while distracted, much like another Seattle star — Randy Johnson. 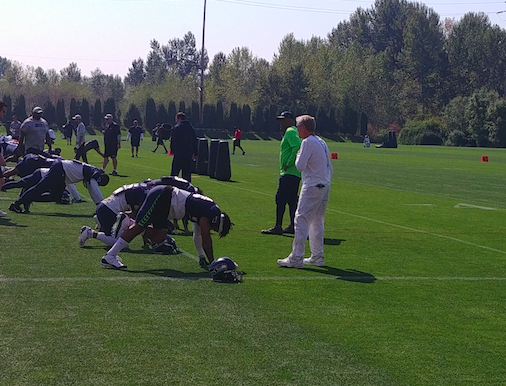 A blink heavy enough to make noise was audible around the Sound Wednesday, as well as throughout the NFL. Disgruntled FS Earl Thomas was back. He lost his staredown. His Seattle teammates, coaches, fans won back one of game’s greatest defenders.

“He made me a better coach,” said defensive coordinator Ken Norton Jr., grinning.

“I couldn’t help but go give him a hug. That’s my boy,” said WR Doug Baldwin, also grinning.

“It’s really good to have him back,” said coach Pete Carroll, who wasn’t particularly grinning.

Carroll won the staredown with a hard-line stance that apparently included zero negotiations to extend Thomas’s contract beyond its expiration after this season. Since Thomas, a six-time All-Pro, means just about everything to Carroll’s bedrock defensive principle of denying the long ball, the intransigence was fairly remarkable.

But after shedding independent thinkers such as CB Richard Sherman and DE Michael Bennett, and losing to injury stalwarts such as SS Kam Chancellor and Cliff Avril, and dumping the disappointing TE Jimmy Graham, Carroll has relished the transition far more than any Seahawks fan.

After the preseason’s third fake game in Minnesota, Carroll offered some thoughts to NBC’s Peter King on the topic that were his most candid yet.

“This feels like when you’re in college,” Carroll said. “That senior class graduated — those guys that did all the playing for you. But that doesn’t mean that you can’t have a good team next time around. New players, new coaches.

“There’s new juice about everything that we’re doing. I go back and do all my teaching again. I’m really happy about it.”

As it applies to Thomas, I think Carroll easily made his peace with life after the potential departure of best safety in the NFL. He doesn’t dislike Thomas, but I think he thoroughly disliked Thomas’s impulsive decision to seek out Cowboys coach Jason Garrett in December with his “come get me” remark after a win over Dallas. And Carroll certainly is not eager to cripple the future with another third contract that can backfire via injury, as happened with Chancellor and Bennett.

With the right offer this week, or shortly thereafter, I think Carroll would trade Thomas and take his chances with starting sophomore Tedric Thompson at free safety with the thrill of coaching him up.

Asked directly Wednesday if a Thomas trade was still an option, Carroll said, “He’s a Seahawk. He’s a Seahawk, he’s always been. I want him to be one forever. I already said that.”

But that answer wasn’t a “no,” and sounded and felt more metaphorical than strategic.

Nor was there much enthusiasm for a question about securing Thomas’s long-term future: “We’ll see as we move forward.”

A tweet Wednesday by ESPN’s Adam Schefter said that in the past week the Cowboys improved their offer to Seattle for Thomas to a second-round pick.

Within the past week, Dallas upped its offer to the Seahawks for Pro Bowl safety Earl Thomas to a second-round pick, per sources. Seattle wasn’t interested; it wants more.

The week prior to the opener is always the highest pressure point in each team’s seasonal set-up. They know better what they need, and are willing to sacrifice to get it. That’s what Seattle, desperate for a pass rush after the injury absence of top rookie draftee Malik McDowell, did a year ago when they traded WR Jermaine Kearse and a draft pick to the Jets for DT Sheldon Richardson. He was good, but turned into a one-and-done, and Carroll lost the gamble.

If they keep him, Carroll is counting on Thomas’s legendary focus and competitive intensity to keep him from drifting. That is certainly plausible. But Thomas sometimes reminds me of another extraordinary Seattle athlete with mercurial, filter-free tendencies — Mariners ace pitcher Randy Johnson.

Twenty years ago, after Johnson’s desire for a long-term extension was denied by club ownership, he went into a performance spiral (9-10 record, 4.33 ERA) that even he couldn’t understand. No one who knew Johnson believed him to be a quitter, but he couldn’t concentrate after believing he was disrespected by the club.

The Mariners traded Johnson in July to Houston, where he went on a second-half tear to push the Astros into the playoffs.

Thomas too, is all about disrespect. In his Instagram post Wednesday announcing his decision to return, Thomas wrote, ” . . . the disrespect has been well noted and will not be forgotten. Father Time may have an undefeated record but best believe I plan on taking him into triple overtime when it comes to my career.”

I worked my whole life for this….. I’ve never let me teammates, city or fans down as long as I’ve lived and don’t plan on starting this weekend. With that being said, the disrespect has been well noted and will not be forgotten. Father Time may have an undefeated record but best believe I plan on taking him into triple overtime when it comes to my career.

That’s about the same approach Johnson took, winning four Cy Young awards over his next 11 years.

The analogy is a rough one, because the sports are vastly different. But the risk-reward on the business end is similar: Do the Seahawks think Thomas can play at a premier level after being distracted by perceived disrespect?

Players and coaches would like to think he can, and Thomas is certainly incentivized in his contract year to perform well to assure giant compensation. But Thomas has never been here before, playing conflicted.

And the Seahawks have a coach eager to move on and teach, not play therapist for a disgruntled star in his final contract year. Ask Sherman.