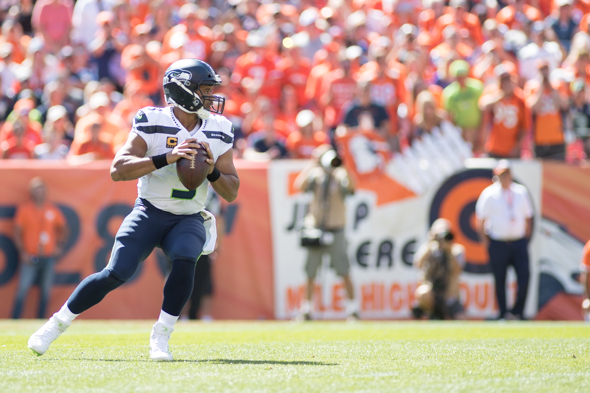 On the Seahawks’ first scrimmage play at Denver Sunday, the Broncos got to QB Russell Wilson for the first of six sacks. The play was mostly forgotten in the subsequent litany of mistakes and misplays that cost the Seahawks a large road win. But I’m not sure that a first-play sack has happened in the Wilson era.

Of all the scripted plays plotted by Brian Schottenheimer for his debut as Seahawks offensive coordinator, brandishing new launch codes for a previously moribund attack,  the first play needed to be worthy. Or at least get positive yardage.

Because otherwise it’s second-and-16 in the huddle, where Wilson looks around the huddle and says, “It’s not 2017, guys!” (Wilson tries not to swear).

The point is relevant this week because the next game, against the Bears in Chicago on Monday night, features the 2017 NFL defensive player of the year, DE Khalil Mack. You might have seen him Monday night thrash the Packers in the first half of his debut after being traded from the Oakland Raiders.

Mack might be a shade better than the Broncos’ Von Miller, who disrupted the Seahawks offense to a degree comparable to Dan Akroyd’s character Louis Winthorpe at the office Christmas party in Trading Places.

The sacks, the meager 64 yards rushing and the conversion of only two of 12 third-down chance seem to have evoked a shudder even from coach Pete Carroll, who shuddered often last season.

“We had four third downs of third-and-five or less, and every one should have been converted,” he said Tuesday. “That would have changed the complexion of the game. We were ahead in the fourth quarter, ready to take the game over in a very difficult situation.”

But no. And now the dieseling offense must carry on for a time without WR Doug Baldwin, their leading receiver whose right-knee MCL was sprained in the second quarter and is likely out at least for the Chicago trip. His streak of 89 consecutive starts dating to 2012 is at an end.

“He’s really going to go a few days at a time here and see what happens,” Carroll said. “We’ll wait and see. It could be a couple of weeks. He’s as tough as they get.”

To add depth at wide receiver, the Seahawks Tuesday brought up from the practice squad Keenan Reynolds, the former Navy quarterback who impressed during the preseason, playing the slot receiver spot at least in the fashion of Baldwin. To make roster room, they cut SS Shalom Luani, the former Washington State star.

But Reynolds is not going to help where the Seahawks need help — keeping Wilson upright. While Carroll insisted the offensive line was improved from a year ago, and held up sufficiently to allow Wilson three touchdown passes, it could not keep the Broncos’ front seven from a steady mangle of the Seattle plans.

With Mack, who Monday returned an interception for a score and had a sack, a pass defensed and a fumble forced, the Seahawks face the same problems provided by Miller. Part of the solution can mean keeping more frequently a back or a tight end in protection, but that reduces potential targets.

“You have to do it in a variety of ways,” Carroll said. “You can help different players on the (defensive) tackles, you can move the line in the direction (of Mack), you can get the ball out real quick. Classic things that you do against pass rushers, particularly on the outside.

“Even when you do it, the really good guys find a way. It’ll be a challenge this week with Kahlil. He’s extraordinarily explosive, he’s fast, he’s really instinctive. He’s a real natural player. You saw him (Monday)  . . . He wasn’t always in the best position. But he could still make something happen. To be as good as he is, player of the year, you have to have all the attributes — speed, strength, explosion, savvy, motor. And he’s just getting in shape.”

In the absence of Baldwin, who went catch-less in a game for the first time since 2013, Miller and friends helped limit Seahawks wideouts to just two yards in the first half. Things picked up in the second half, but for the game, backs and tight ends had 12 catches, while three receivers totaled seven for 112 yards.

Whether by plan or circumstance, that’s a bashful attack for a season opener, particularly when Carroll saw the daunting advantage the Broncos enjoyed with a home opener in high heat and high altitude. The environment has helped the Broncos win 17 of their past 18 home openers, including Sunday. Carroll said conditions made some players vomit, and others required IVs.

Naturally, he doesn’t want to use it as an excuse, but he did offer it up as part of the narrative. Then again, no one was winded or sick on the first play of scrimmage. That happened only after going backward.