The Huskies’ little linebacker with the big motor had the game’s key play in a 35-7 domination of BYU that was Washington’s most complete effort of the season. 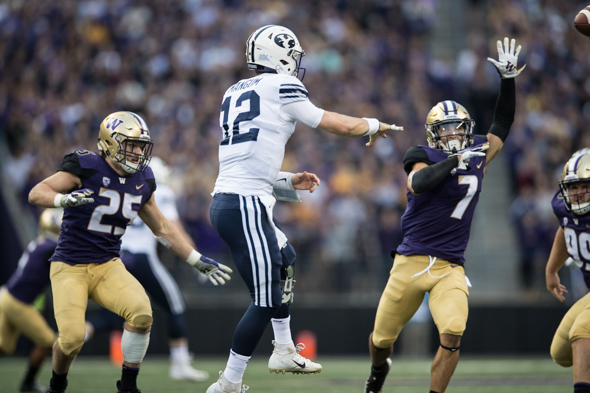 In the final seconds of the first half, after the Huskies missed a short field goal to keep their lead at 14-0, BYU was in desperate search for a way to avoid irrelevance. Instead, they ran into Mr. Irrepressible.

Actually, LB Ben Burr-Kervin caught them from behind. The national defensive player of the week roared up along the sideline behind RB Lopini Katoa as he crossed the BYU 20.

“They were running a little outside run at the boundary, and I just came up behind and hit the ball out of his hands,” Burr-Kervin said. “It came right out, and once it’s on the ground, let’s hope we can get it.”

Teammate Jojo McIntosh did. Three plays later, with five seconds left until halftime, Jake Browning bounced a quarterback draw up the middle for nine yards and a soul-crushing touchdown that put the 11th-ranked Huskies up 21-0 and the 20th-ranked Cougars down for the night, eventually building a 35-7 triumph (box) at Husky Stadium.

“Play of the game,” said Huskies coach Chris Petersen of Burr-Kervin’s swat. It didn’t match the breadth of the 20 tackles a week earlier against Arizona State that won him national recognition, but it was another example of his uncanny knack for big plays for a bitty guy.

“He’s smart, crafty and fierce — a good combo for a linebacker,” Petersen said.  “The No. 1 (worry)  when we were recruiting him was whether he could stay healthy. He throws his body in there, and he’s not the biggest guy (6-0, 221 pounds).

“We thought he was a really, really good player. That’s why we started him last year.”

This season, with a star-filled UW secondary, Burr-Kervin, from Menlo Park, CA., has become the biggest force on a defense that has given up 21, 3, 7, 20 and 7 points in their five games.

BYU’s wild collection of formations, jet sweeps and misdirection turned out to be mostly piffle against a disciplined group.

“We played our best game of the season, by far,” Burr-Kervin said. “They were shifting, using smoke and mirrors to try to get your eyes out of alignment. We did a pretty good job from the outset of knowing what they were trying to do.We shut down a lot of their sweeps. They had to go deeper into their playbook and throw more than they wanted.

“You want to have a game like this, where by the third quarter you feel pretty good about it.”

For a team that beat powerhouse Wisconsin, then ranked sixth, at formidable Camp Randall, BYU was remarkably docile.

Tanner Mangum was in the long tradition of “mature” BYU quarterbacks who typically drive a Volvo station wagon with three kid seats and have mortgages and life insurance, but he played a little scared. The fifth-year senior completed 18 of 21 passes, but his throws were mostly little floaters. Of his 160 yards in the air, only two receptions were more than 12 yards.

While the defense nearly pitched a shutout — a punt muffed by Chico McClatcher gave BYU a short field for its only TD with four minutes left — Browning led an offense that operated at season-high efficiency.

“That’s the Jake we see all the time,” Petersen said, taking a shot at critics who dwell on Browning’s big mistakes. “When the offensive line blocks like they do, and
he can sit back there and really look at things. he’s a hard guy to stop.”

In his fourth season, Browning had himself a night of milestones.

A nine-yard pass to TE Drew Sample in the second quarter — his 11th completion in 11 attempts — lifted Browning past Cody Pickett (10,220) as Washington’s career leader in passing yardage. He’s 15th in Pac-12 history with 10,347 yards. He was also the sixth player in conference history to account for 100 touchdowns running (14) and passing (86).

His evening’s remarkable total of 23 completions in 25 attempts (92 percent) missed by one the NCAA single-game record for completion percentage, and became second in UW history to Tom Flick’s 16 of 17 against Arizona in 1980.

Dominance on both sides of the ball was a breakthrough for Huskies, who have been good but more erratic than expected for team so experienced. Saturday at UCLA (4:30 p.m., FOX) they catch the Bruins on the downstroke — 0-4 under new coach Chip Kelly after a 38-16 loss to Colorado — before going to Oregon for what at the moment looks like the game of the Pac-12 season.

Nearly as rare for them as it was for Mariners starters, the Huskies needed a complete game. Said Browning:  “I thought we were primed and ready for a breakout performance.”

Having broken out all season, Burr-Kervin wonders what kept them.