Thiel: A party for Seattle’s half-century of hoops

Kevin Durant returned to his one-year home of Seattle, as did a number of Sonics legends in the final event at KeyArena. Lots of wonderful nostalgia, but no certainty of a Sonics future. 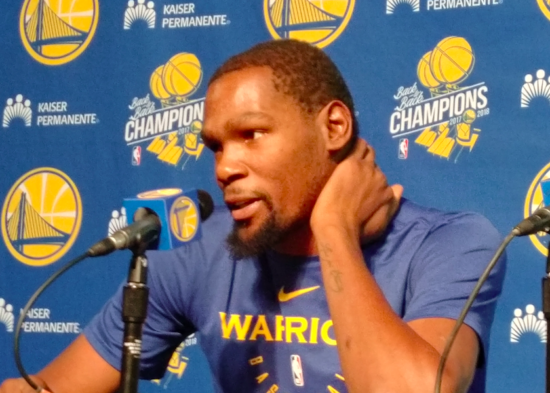 You have to be of a certain vintage to appreciate the hoops majesty of the moment. As Haywood, in suit and tie, stood along the sidelines watching Durant warm up, I realized I was looking at the two greatest Sonics in the NBA’s half-century in Seattle.

A few hairs rose on the back of my neck.

The team has been dark a decade. In the final event of 56-year-old barn in its current form, the memories came back into the light.

You know, the one-time Sonics ball-boy made good.

“When we got Kevin, I started thinking about how we might get him back to Seattle,” Welts said on the court pre-game, where some in the sellout crowd swarmed the lower bowl taking photos and pursuing autographs. “I think this works.”

Durant was the last great Sonic, but only 19 in his lone year in Seattle before the heinous piracy. Now 30 and astride the NBA with the defending champion Warriors, he was greeted with a wild ovation that grew louder as he peeled off his warmup to reveal a green Shawn Kemp jersey.

The wardrobe high-function was a secret: “I’m not big into surprises, but I thought I should honor past legends.”

Said his coach, Steve Kerr: “I didn’t know. I got chills.”

Believe it or not, Durant, a four-time NBA scoring leader, nine-time All-Star and a participant in 127 playoff games, said he woke up after his afternoon nap and felt nervous about his Seattle return.

“I never felt that before a game, especially for preseason,” he said after the 122-94 win over the Sacramento Kings. “It was a crazy feeling.”

He admitted all the attention surrounding his return threw him off early.

“Everything being about me was definitely weird,” he said. “I wouldn’t want that any other time. I definitely didn’t feel like I was in the game until second quarter.”

He did stir once. Early in the first quarter, Durant was 20 feet out on the wing, faked his defender into the orthopedic-surgery ward and blew down the baseline for a two-handed reverse dunk. The crowd also left its collective feet.

He fired up later, finishing with 26 points, seven rebounds and six assists in 30 minutes. Strictly from a scoring standpoint, he was overshadowed by teammate Klay Thompson. He had 30 points in 23 minutes, including 15 in the first six minutes as a salute to his Washington State hoops heritage.

“I saw a lot of Cougs in the building,” said Thompson, who grew up in Portland when his dad, Mychal, starred for the Trail Blazers. “It motivated me to come out and give them a show.

“To feel the love from the crowd . . . it didn’t feel like a preseason game. You could almost put your hand on the energy and feel it.”

The energy was generated in part by the return of numerous Sonics legends, including Haywood, Seattle’s first pro sports superstar. A 6-foot-8 power forward whose five Seattle years included a 1972-73 season when he averaged 29.2 points and 13 rebounds, his story is lost on many fans. But not to Durant, who met him pre-game and knew his story of  winning a ground-breaking legal fight for the right to play in the NBA before his college class would have graduated.

“He’s one of the those guys who waved the players’ flag,” he said. “He paved the way for us.”

Durant’s play dominates now as Haywood’s did then. But Durant did his best elsewhere, not in Seattle. His return Friday was a fine gesture, but a reminder that the return of the NBA, despite the apparent resolution of the agonizing saga of the arena, is still several years away at best, and certainly not guaranteed.

Durant felt an appreciation for the lingering affection for him and the Sonics tradition. Before the game, he was asked about all the green-and-gold gear that popped up around town Friday and throughout the arena.

“They’re holding to their culture of basketball,” he said. “You see so many great basketball players make it to the NBA.  To not have an NBA team to watch those guys when they come back home . . . We want to keep the name alive and make sure nobody forgets about Sonics basketball.

“I can’t wait to see another team come here and call this city their home.”

Kerr chipped into the sentiment by attending his pre-game chat in a Sonics T-shirt.

“This is my way of supporting that cause,” he said. “Kevin represents the final season of the Sonics, and their return someday. I know he’s going to get a huge ovation. It’s fun to be part of this.”

Kerr, part of the 1996 Chicago Bulls team that beat the Sonics in the NBA Finals, who also played under Wilkens when he coached the Cleveland Cavaliers from 1989 to 1992, lamented post-game the absence of the Sonics from the NBA landscape.

“Everybody who’s been around the NBA has a soft spot for Seattle, its basketball history and the beauty and brilliance of the city,” he said. “It just doesn’t seem right that the Sonics aren’t part of the NBA.

“Naturally (the event) brings out a lot of nostalgia and sentiments. They brought together former players and coaches, showed (video) highlights on the board . . . It was very different from anything I’ve experienced.”

Wilkens, who during a third-quarter timeout brought out the 1979 NBA trophy to center court with Brown and Sikma, also evoked the tradition gone.

“Tonight brings back memories of what basketball means here,” he said. “Winning a championship leaves a legacy. It’s a legacy I don’t feel we ever should have lost. To get this  reminder, to see this talent . . . this is what it would have grown to.”

It could have grown with Durant, along with the final No. 1 draft choice in 2008, Russell Westbrook. But no. For painful reasons well known to Sonics fans, the NBA presence is reduced to a party wrapped around a pretend game.

But for one night, seeing Haywood and Durant connect the historical hoops narrative for Seattle over half a century made for a thrill that was legit.