Thiel: Seahawks show no fear, get no win

A big underdog at home, the Seahawks did nearly everything well enough to upset the Los Angeles Rams. A final penalty dictated a loss, but the game was anything but a failure. 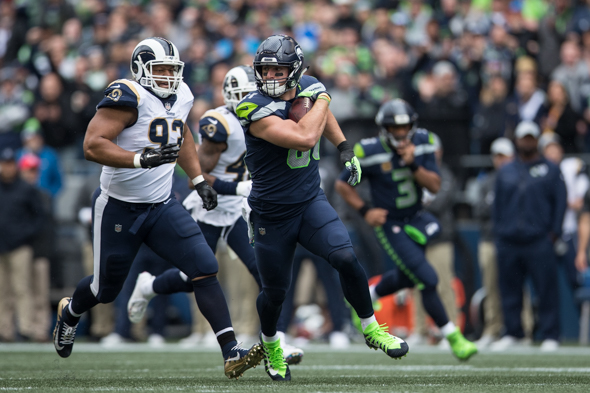 Russell Wilson said he suspects the Seahawks are about to turn a corner, but the agonizing 33-31 loss to the undefeated Los Angeles Rams Sunday (box) denied him the pleasure of conclusive evidence. Nevertheless, RG D.J. Fluker made a blunt point about progress that suggests Wilson was closer to the truth than anyone suspected Sunday morning.

“The minute we kicked their ass up front, that showed everything,” he said forcefully, bragging up the season-high 190 rushing yards against a defense full of all-star meanies. “We played hard every single snap. They’re a great front, but they don’t want to play that run. They not about that. They play it here and there, but at the end, their offense saved them.

Fluker’s animated account was not far off the facts. Superstar linemen Ndamukong Suh and Aaron Donald did not dominate. The Rams’ secondary was error-prone. The Rams’ collective pressure did not repeatedly blast Wilson. And they did not like being run on 32 times, with only 21 chances to run down the guy they sacked seven times in December.

As a partial result of keeping the gang fight in check, the Seahawks put together a pair of third-quarter drives of 75 yards each, climaxed by the first two touchdown receptions in the career of second-year WR David Moore, to take a 31-24 lead into the fourth period.

The sequence surprised and delighted a Clink sellout still that had scorch marks from the teams’ previous Seattle meeting in December, a 42-7 rout that was the biggest margin of defeat in coach Pete Carroll’s Seattle tenure. They also bore a fresher wound from the inelegant departure last week of All-Pro FS Earl Thomas, who rode out of town backward and broken, middle finger raised high.

Despite the voids from the first game in the post-Legionnaire era, as well as the December nightmare, the defense made enough key stops to keep the game winnable, despite surrendering 30 first downs and 468 yards to the NFL’s most productive offense.

“I don’t know how many people out there thought (the game) was going to be like that,” Carroll said of the week-long forecasts of potential dismemberment. “But the guys in this room did.

“We controlled the field like we needed to — third downs (7 of 12 conversions) were terrific. Took care of the ball (no turnovers). Ran it for a bunch (average gain of 5.9 yards per carry).”

In fact, the Seahawks checked nearly every box on Carroll’s list that precipitates a triumph. But they lost. Fluker, among others, sounded bewildered.

“I don’t understand how we didn’t come out on top,” he said, grumbling. “We gonna see them again. I can’t wait for it.”

In fact, the single most vexing moment belonged to Fluker, along with his right-side buddy, tackle Germain Ifedi. Trailing 33-31 with 4:28 left, Wilson had just connected with wR Tyler Lockett on a 44-yard bomb for a first down at the Rams 32-yard line. They were already in the field goal range of Sebastian Janikowski, and seemed to have the goods for more.

But Ifedi was busted for his customary false start. One play later, Fluker was called for holding Suh. With 23 yards needed for a first down, Wilson twice went with short throws to Lockett, but came away empty. At 3:38, Michael Dickson punted away Seattle’s final possession because the Rams were able to run out the clock.

The penalties helped un-do what had been to that point a splendid effort by a 7.5-point underdog.

“They called a penalty, cost us the game,” Fluker said. “I been taking (Suh) to the water all game. He and (Donald), going at it all game, know what I mean? He got frustrated, I got frustrated.

“I got a whole lot of respect for him. but at end of the day, I gotta do my job. Wherever he needs to go, I’m taking him there. I back down from no one.”

Manly manliness aside, the Seahawks squandered the chance. A field goal by Janikowski was not guaranteed, nor would a single-point lead necessarily have stood up against the NFL’s top offense. But to self-destruct on the final chance was galling.

“It was really disturbing that that happened at that time,” said Carroll, who didn’t witness the infraction. “It just pissed me off that that was how this thing ended.”

But they ended up the weekend with a 2-3 record, with a nice participation ribbon and the chance to seethe about it on a long flight to London this week to play the Raiders in Wembley Stadium.

“Everybody gets terrified with (Donald and Suh),” he said. “We weren’t terrified. We weren’t scared.”

In fact, the Seahawks unexpectedly played a Super Bowl favorite to a standoff. Almost. 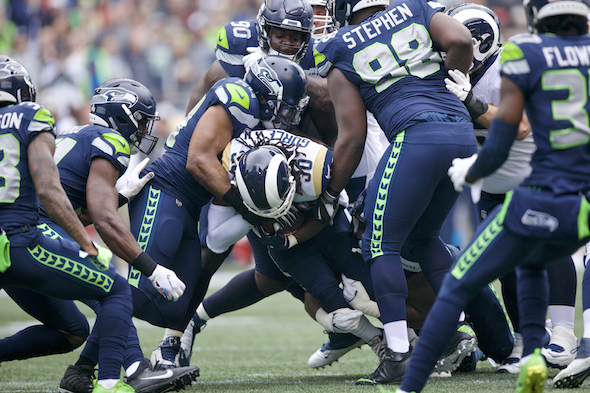