For $70 million in private funds, developers of the arena proposed a three-rink hockey practice facility for sagging Northgate Mall. And it’s not part of the $750 million arena budget.

Shopping malls are a little like newspapers — once-formidable bastions of American culture now hanging on for dear life amid a tsunami of changes in technology and consumer behavior.

But suddenly, Seattle’s venerable Northgate Mall, opened in 1950, is about to gain some economic high ground, rescued by the same people attempting a similar renaissance of KeyArena, a relic of the 1962 Worlds Fair. A 180,000 square foot ice-hockey practice facility, estimated to cost more than $$70 million, will be built there from private funds.

If there’s Congressional Medal of Honor for recycling, Seattle wins. But only if the medal is made from aluminum from a used Boeing 737 rusting in a desert somewhere.

The developers propose to build for their presumptive National Hockey League expansion franchise a three-rink venue on the mall’s grounds that includes the team headquarters, helping transform Seattle, in the words of Tod Leiweke Monday at a press conference in the mall, into “the epicenter of hockey in the Northwest.”

Leiweke is CEO of Seattle Hockey Partners, but in an earlier life held the same job with the Seahawks, when he spearheaded the club’s creation of its Virginia Mason Athletic Center on unused former industrial land along Renton’s Lake Washington shoreline.

The VMAC’s setting and facilities are superior. But it is not a public space, except for about a dozen days in the summer when fans are allowed upon a berm to watch Seahawks training camp.

The Northgate project will be very public, surrounded, in a master plan seeking city approval, by hotels, residences, restaurants, shops and — in complete contradiction to the Seattle Center project — thousands of parking spaces. Additionally, the next leg of the city’s light rail system has a station scheduled to open at Northgate by 2021.

In Leiweke’s vision, he sees the Seattle Ice Centre as the place where his team works, the region’s kids learn the game, and the hockey nation and maybe the world show up for camps and tournaments. And its funding is separate from the budget for the arena project, whose cost is now said to have moved past $750 million.

“We’re investing lots of money in Key Arena,” he said. “We’re acquiring a team. This (training facility) is a major commitment to try to grow the game.

‘There’s simply not another site like this. When we use the term world class, we mean it here. Second to none.”

The Northgate plan was part of the presentation made last week in New York to the NHL expansion committee, which voted 9-0 to recommend Seattle as the NHL’s 32nd franchise ahead of a meeting of owners in December.

“We think this was one of the more compelling parts to the owners,” he said. Mayor Jenny Durkan, who joined Leiweke on the podium, was also in New York, and expressed the scene more vividly:

“Green (the color of envy) didn’t look good on them.”

Durkan, who proudly pointed out that she worked as a teenager at the mall’s J.C. Penney store, cited the primary benefit for the city: It’s in the city. 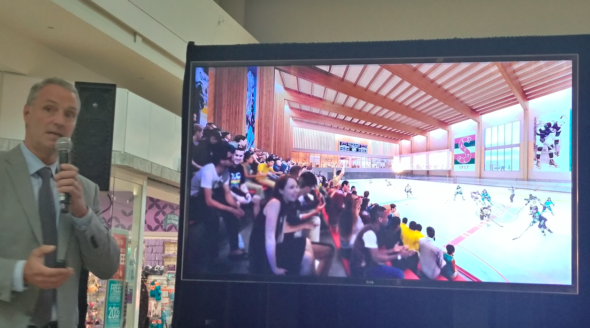 “There are many areas in the region that would have fought for this — on the east side, south of Seattle, north of Seattle,” she said. “The commitment this ownership group has made to Seattle is phenomenal.

“Not just the spending but how they’re fitting with the community. This will change the face of hockey here and on the West Coast. Our future has to be a city that keeps reinventing itself. There’s a host of ways, but to do it in the urban center is remarkable.”

A key figure in the site selection was Seattle City Council member Debora Juarez, whose district includes Northgate. She was the council member who spent the most time on the KeyArena redevelopment plan by Los Angeles-based Oak View Group, headed by Tim Leiweke, Tod’s brother.

According to a source who declined to be identified, Juarez made it plain to OVG where she wanted the practice facility: “She said you might be able to build it cheaper in Tukwila or Shoreline. But this is going to be in Seattle.”

Within Seattle, Simon Property Group, owner of Northgate Mall and the largest shopping-mall operator in the U.S., was open to a breakthrough idea to help save another enterprise sagging in the face of competition from online-retailing behemoth Amazon.

Juarez helped put OVG together with Simon, which in March proposed to the city a major teardown, followed by building a hotel and 1,200 housing units ahead of the arrival of light rail upon the 55-acre site.

The hockey plan came in late and low, but was sufficiently innovative to persuade Simon to seek a change unlike any among its properties.

“Timing,” said Simon Malls CEO Michael McCarty Monday, “is everything . . . We will have a premier destination to work, shop, live, play, study (North Seattle Community College is just west across I-5) and now to skate.”

Then came the question: Is there room in this project for an NBA practice facility if needed?

OVG’s director of special projects who previously worked with Tod Leiweke developing the VMAC, Lopes was on hand to explain the video/slide presentation. He said that the five-story building proposed on the site’s north end would have two phases. The first phase includes the first two floors that would house team offices and would be ready for the scheduled 2020 opening, then a second phase of three stories that could include a floor/gym dedicated to NBA needs.

“We talked about what could be,” Lopes said. “We did an exercise to see whether we could facilitate an NBA practice facility, and the answer is yes.”

If that sounds a little vague, so is the future of the NBA in Seattle. An ESPN story last week on Seattle’s chances reaffirmed that expansion likely will not be on the table for years, and relocation is equally unlikely. Further, it suggested that arenas that host both winter sports are becoming less attractive financially to NBA owners, who prefer hoops-only, such as the new $1 billion arena in San Francisco for NBA champion Golden State. Naturally, Tim Leiweke disputed that contention.

Regardless of the speculation about something at least eight years away,  it’s clear that in Seattle for the foreseeable, it’s all about the puck, because private interests have removed nearly all the risk for politicians.

Check out this statement from Durkan Monday:

“We believe that a professional sport is good for the long-term economic and social life of the city, and we know we need to re-create Seattle Center for the next generation of kids, as it was when I was a kid in Seattle.”

Imagine what might have happened in 2008, when the Sonics were in peril, if Mayor Greg Nickels and the members of city council, some of whom remain, had expressed the same  conviction.