Thiel: Seahawks win over the Brits, and Raiders

Embraced by the international sellout crowd at Wembley Stadium, the Seahawks responded with wall-to-wall dominance in a 27-3 win over the Raiders that wasn’t that close. 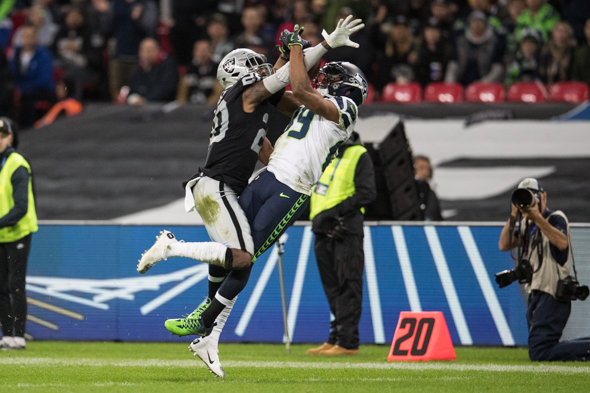 WR Doug Baldwin somehow came up with this 42-yard catch, one of six for 91 yards. / Drew McKenzie, Sportspress Northwest

To paraphrase a famous English athlete with jersey number 007, the Raiders were shaken, the Brits were stirred.

In London this week, the Seahawks found two things: A home away from home, and a turning point.

A sold-out Wembley Stadium gathering of 84,922 — an NFL record for the British series —  embraced the Seahawks, who hugged back with a 27-3 domination (box) of a withering 1-5 Raiders franchise that failed to weaponize Marshawn Lynch.

Heading into a bye — the reward for a round trip of nearly 10,000 miles — they now know an important thing about themselves: They’re doing what they do best well enough to dare opponents to stop them.

“We’ve put together four weeks of pretty good football,” said an ebullient coach Pete Carroll. “I’m really pleased with where we are.

“We don’t mind saying we want to run the football. We want to be the most physical running team in this league.”

The demonstration began with the first series, when the Seahawks ran the ball for the first seven plays. The 14-play drive that ate up half of the first quarter resulted in the first opening-possession touchdown for Seattle in 34 games. After that, the Raiders were close to inert. 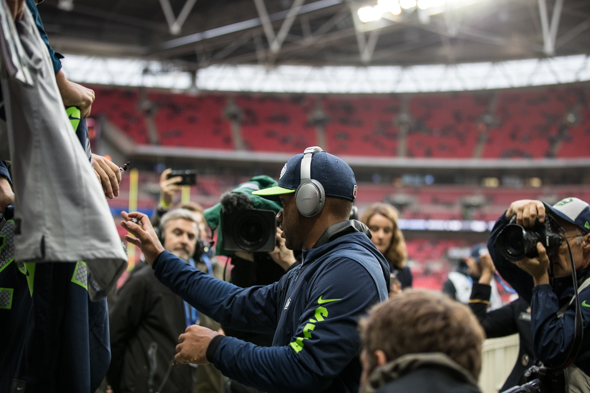 The Seahawks ran 37 times for 155 yards, and needed only 23 pass attempts to accumulate 369 yards of total offense. The number would have been significantly larger if not for eight penalties and 64 lost yards, several of the fouls negating big offensive plays.

“We totally changed (from the first two weeks of defeats),” said Carroll of his 3-3 team. “We should have won last week (a 33-31 home loss to the undefeated Los Angeles Rams), if we had just taken care of business. We would have won four in a row and would be obvious we’re on a roll.

“We can feel it. Players know it.”

They played the NFC-favorites Rams to a near-standstill, and Sunday crushed perhaps the worst team in the AFC, which is mandatory for any team with serious ambitions. Based on recent results, it appears the Seahawks have advanced from the mild-amusement category to, as the Brits might put it, bang on.

Everything about the franchise’s first trip to London — travel, logistics, accommodations, time-change management and especially fan support, even the drizzly weather — checked every box.

To use Carroll’s word: “Impeccable.”

He gushed about the team’s support staff, the hosts and the fans.

“The whole experience, culminating in playing a really complete football game, jut makes it a special week,” he said. “As we got closer to the game, we realized how much energy there was for the Seahawks here. Not only were (fans) so much for us, they made it hard on the other guys too.

“(British and other European fans) supported us, as well as those fans from home who made the trip. We’re really grateful . . . it felt like a home game. If we come back again, I’m really looking forward to it.”

Regarding football, another Seattle breakthrough came in the pass rush. An asterisk is required because the battered Raiders offensive line was down to a third-stringer at left guard, and lost top WR Amari Cooper to a concussion after a vicious, Chancellor-esque hit from SS Bradley McDougald.

Nevertheless, QB Derek Carr was sacked eight times, but only six counted because of Seahawks defensive penalties. His 106 yards passing and 3.9 yards per pass attempt were futility marks rarely seen for a healthy, fifth-year NFL QB. Lynch labored valiantly, making potential two-yard losses into four-yard gains, but 45 yards on 13 carries (and 14 yards on three receptions) wasn’t close to what he had hoped to lay on his former team from 2010-15.

DE Frank Clark had 2½ sacks and forced two fumbles recovered by teammates as his role  grows as heir to a franchise legacy of big-play defense. This despite missing a chunk of the second half because of illness.

“He’s turned his outlook in a really positive way,” Carroll said. “He’s playing as a great teammate. He’s taken a leadership role reminiscent of guys here before. It’s not so much what he says as how he works. I’m really fired up about him.”

QB Russell Wilson, the team’s biggest celebrity, navigated the hype — “an almost Super Bowl-like experience, to be honest,” he said  — to hit on 15 of 23 passes, including three touchdowns, to eight receivers. Only one went to a tight end — a career first for Tyrone Swoopes for 19 yards — because starter Nick Vannett was a late scratch (back problems). None among Swoopes, Darrell Daniels and George Fant (yes, the 320-pounder) was on the tight end roster that began the season.

But the Seahawks offense, behind an O-line that seems to grow more efficient weekly, seems capable of working around injuries. WR Doug Baldwin finally had a strong game — six catches for 91 yards — and four rushers, including Wilson (sacked only once), had at least six carries apiece.

The development of balance and diversity prompted an observation by Wilson that was more trenchant than his usual happy-speak.

“Sometimes,” he said, “people love the result more than the process.”

He means that fans and media usually stop to draw major conclusions from single outcomes, rather than see the whole road.

Sunday, despite being on the wrong side of the ocean as well as the road, a smooth patch was found. 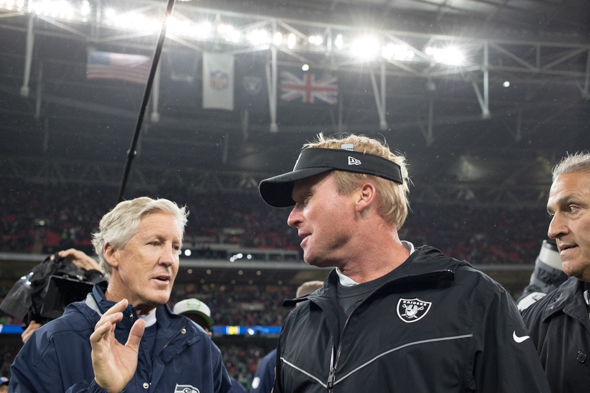