Thiel: Seahawks add a tight end without a trade

For the first time in a game, the Seahawks will get a look at their most spendy free agent signing, Ed Dickson. He’s the tight end with the grass stains, unlikely Jimmy Graham. 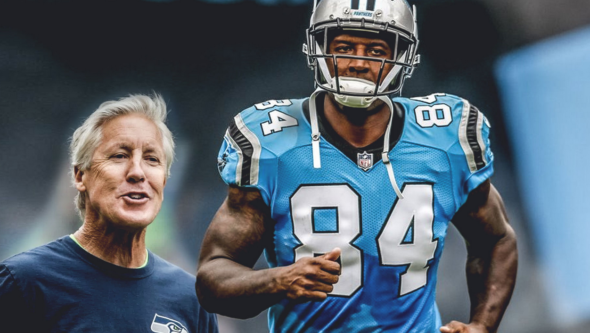 Just ahead of the NFL trade deadline Tuesday, the Seahawks added a veteran blocking tight end for the cost of no players or draft picks, not long after rookie flash Will Dissly from the University of Washington went down with a season-ending knee injury.

“You give a player like myself time to lift and run and mentally get prepared, I feel like I might be in the best shape of any player in the NFL right now,” said TE Ed Dickson, who will be a star if his mastery of the playbook is as good as his mastery of hyperbole.

After injuring a quadriceps muscle during off-season conditioning that landed him on the non-football injury list, he’ll play Sunday for the first time in the regular season in Detroit, where the Lions host the Seahawks (10 a.m., FOX). The 31-year-old former Oregon Duck was signed in March during free agency, but the injury made everyone forget he was the biggest spend of Seattle’s off-season — three years for up to $10.6 million, with $3.6 million guaranteed at signing.

He was tasked to be the anti-Jimmy Graham. Dickson would block first, second and third, then maybe catch a pass. Graham, you may recall, looks at blocking as a six-year-old looks at spinach.

“I’m a blocker first,” Dickson told 710 ESPN in March. “I pride myself (on it). When I came out of college, they talked about how I was a pass catcher . . . Don’t get me wrong — I love to be a pass catcher. But I consider myself an all-around tight end. I’m not afraid to stick my nose in there and block for my running backs, and whoever, even Russell (Wilson) on the couple runs that he’s got.”

At Carolina the past four seasons, Dickson in 2017 had 30 receptions for 437 yards, benefiting from the injury absence of star TE Greg Olsen. With Olsen healthy, the Panthers weren’t going to spend big for a backup, and the Seahawks were desperate for a tight end who had experienced grass stains on his uniform.

Dickson, healthy for a couple of weeks but having to wait until after the bye to be eligible, is eager.

The plan is to slow his roll.

“We’re going to be careful,” coach Pete Carroll said Friday after confirming Dickson and starter Nick Vannett (back) were ready. “He has worked really hard to get back. He’s been probably much more so than a regular guy coming off of rehab, because he’s had time to do that, conditioning-wise. We’ve got a thought in mind but we’re looking for him to be involved. We’ll just see how he handles it during the game.”

Dickson has been a part of things, just not much on Sundays.

“He really made a good effort to be as engaged as he could be,” Carroll said. “We maxed that part of it out. we had a really upscale workout routine for him to assure that he could come back. He was ready a couple weeks back.”

K.J. Wright back too, maybe Kendricks next week

He’s been on indefinite suspension by the NFL after he pleaded guilty to insider trading and was cut by Cleveland in August, only to be scooped up by Seattle in the Wright emergency. Carroll said he finally heard from the league Friday, but nothing was definite. Kendricks is scheduled for sentencing in January.

“The league is still working on where they’re going with it,” Carroll said. “Maybe we hear something early next week . . .  but that’s kind of hopeful on my part. They haven’t guaranteed us that at all. They’re trying to measure what to do next.”