At the NFL trade deadline Tuesday, the Seahawks were quiet, except for waiving WR Brandon Marshall, who started well but had some dropped passes. 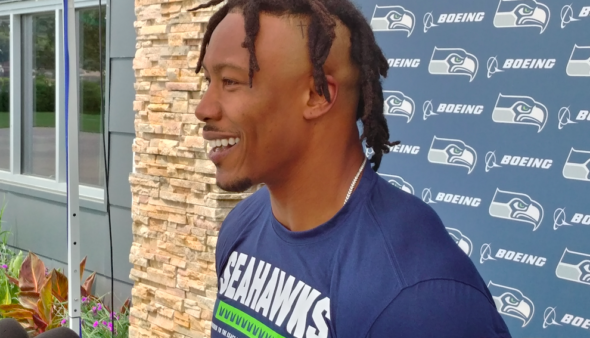 Seemed like a worthy try in training camp, giving 34-year-old Brandon Marshall, once one of the NFL’s premier receivers, a free-agent shot at being the big red-zone target the Seahawks lost when TE Jimmy Graham wasn’t re-signed. But Tuesday the Seahawks released him, according to ESPN.com, a victim of too many drops and the rise of WR David Moore.

It looked good in the first two games, when he caught seven balls for 90 yards and a touchdown. But subsequently he had drops of at least three catchable balls. He ended with a single catch, a mop-up-time reception in the rout of the Raiders, in the past three games. He played two snaps Sunday in Detroit.

When asked, coach Pete Carroll gave no indication of any health or discipline issues affecting Marshall’s playing time. He finished with 11 receptions in 23 targets for 136 yards.

The Seahawks made no moves to acquire players at the NFL trade deadline of 1 p.m. Tuesday, and have a roster spot open. One potential move prior to Sunday’s home game with the Los Angeles Chargers is to promote WR Keenan Reynolds from the practice squad.

Tyler Lockett, fresh off a contract extension, leads the Seahawks receivers with 25 targets in 33 attempts and 394 yards with six TDs.  His yardage total is 43rd in the NFL, reflecting the Seahawks’ renewed emphasis on the running game.

The second-year Moore has 11 receptions in 14 targets for 221 yards and four touchdowns. Doug Baldwin, who missed time with injury, has 14 catches on 20 targets with 159 yards, but has yet to score.

In other NFL trade news, former Seahawks WR Golden Tate played the final game of his five-year career in Detroit Sunday against Seattle. He was traded Tuesday by the Lions to defending Super Bowl champion Philadelphia in exchange for a third-round pick.

Tate, 30, was in the final year of his contract, and the Eagles will pay the $3.7 million balance due. The third-round pick likely would be the equivalent of the compensatory pick the Lions may receive, should Tate have left them in free agency.