Furious with his brief benching at Cal, Jake Browning responded with a big first half against Stanford that was just enough for the Huskies to survive, 27-23. Myles Gaskin helped too. 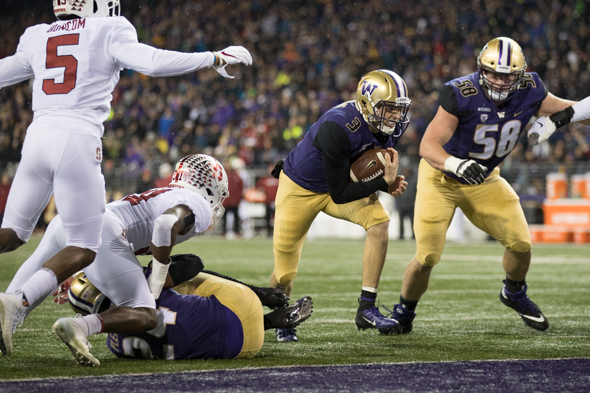 The cold wind off Lake Washington Saturday night was no match for the heat coming from Jake Browning.

For a while, anyway.

Furious over a benching for two series in an upset loss at Cal a week earlier, Browning turned his anger into two of the best drives of Washington’s season. But after the adrenaline that powered a 21-0 halftime lead dwindled, the Huskies found themselves hanging on for dear life against relentless Stanford that, for want of an extra point, probably would have prevailed.

However harrowing it was to have a home game come down to a final-play interception in the end zone, the Huskies won, 27-23 (box). They proved they were capable of getting off their lips, but did little to establish that UW (7-3, 5-2), along with most everyone else in Pac-12, is any better than the next guy.

As for Browning, who has started every game in his four years and had never been benched until the Cal game, he had a little something to get off his chest.

“We sat down, and I didn’t shy away from the fact that I was pissed off about it,” he said, speaking to the media for the first time since the incident. “I think anyone in that situation would be pissed off. I was, and I’m not going to lie about that.

“I decided to move on, not let it affect our season. We sat down, hashed it out. I think it’s a little bump in the road. But coach Petersen, he’s my guy. Been through a lot with him. I tried to handle it as maturely as possible, try not to let it turn into some huge drama, or whatever.

“I tried to move on to this game. I figured if we win this game, we’ll feel a lot better. Luckily, we did that.”

Good of him to mention luck. It may have been decisive, at least if you believe kicking into the wind involves a fair amount of randomness.

After Stanford (5-4, 3-3) scored with 3:24 left on 33-yard touchdown pass from QB K.J. Costello to WR Trenton Irwin, PK Collin Riccitelli missed the extra point wide right. It was a shank, but who knows if he was over-compensating for the gusts?

The 27-23 deficit meant the Cardinal, after forcing Washington to punt after a five-play final possession, needed a touchdown to win instead of a tying field goal to force overtime.  Costello seemed up for it in the final 2:05, completing four of six passes to reach the Washington 34-yard line with three seconds left.

He had the good fortune of going against a depleted UW secondary. Starters Jordan Miller and Myles Bryant were out with injuries, and S Jojo McIntosh was ejected in the second quarter following a penalty for targeting.

But S Taylor Rapp was still there. Costello launched his Hail Mary, seeking one among the stable of power forwards Stanford had at tight end. Instead, he found Rapp at the goal line, making the Huskies’ third and most vital interception of the game.

The Cardinal comeback was nevertheless remarkable. Stanford didn’t have a first down until 11:35 remained in the first half, then wound up with 22, three more than Washington. They also had 424 of yards total offense, 53 more than the Huskies.  Washington’s continuing puny pass rush sacked Costello just once, and at times seemed helpless, giving up all 23 points in the final 25 minutes.

Once the whiplash response to the 12-10 loss in Berkeley subsided, Washington seemed spent. Petersen suggested the week took its toll.

“That last week was really hard,” he said. “There’s no doubt about it. When you lose any games, it’s hard. On top of not scoring many points, all the offense, the players, the coaches, felt the weight of the world on their shoulders.

“You want to get it fixed, to go play and try to get it right. We made some strides tonight.”

The guy with the most strides was RB Myles Gaskin. After missing two games to rest a sore shoulder, Gaskin had 152 yards in a startling 28 carries. His six-yard touchdown run with 2:31 left in the first half put the Huskies up 21-0, and all seemed right and just in the purple world.

Then Stanford came ripping back.

“Credit coach (David) Shaw,” Browning said.  “They stick to their stuff. They did the same (against Oregon). They did not panic at all. Usually people force stuff up, they didn’t at all.”

Forcing stuff up has been an occasional Browning trademark. But he made no turnovers while completing 16 of 27 passes for 194 yards. Yet there were times when Browning pulled the ball down to run, often coming up short of a first down. Apparently, that was part of Stanford’s plan.

“They dropped a bunch of (defenders), and we were in max protect, with three guys running routes,” he said. “Early in the season, I would have tried to run backward and make stuff happen. Now, I try to get forward and stay at second and five instead of second and 12.”

If true, that is a small sign of progress for the beleaguered Browning.

He rushed for the 16th TD of his career to get UW’s first touchdown, and threw for his 91st career TD in the second quarter. That put his career of total TDs at 107, fifth all-time in Pac-12 history. Yet he is roundly criticized for his mistakes, to the point where even his coach faltered on him.

Petersen, was not surprised Browning was raging.

“If he wasn’t upset and really pissed he got pulled out, I probably wouldn’t have wanted to put him back in,” he said. “That’s Jake, he’s a competitor and fighter. That’s happened to me back in the day. I know what it feels like. It’s different than the safety or tackle getting pulled out. He understood what I was trying to do.

“I’m pleased with him, but I knew he would respond like this.”

Throughout his career, Browning has deferred credit. For once, he gave himself a pat on the back.

“I’ve fought through a lot of things in my career, and felt like I responded well to all of them,” he said. “You can question a lot about me, but I’m pretty mentally tough.”

Tough enough to beat Stanford. And the critics. For a week, anyway.