Huskies back in AP poll at 20th; Cougs stay 10th

The Cougars and Huskies are the lone Pac-12 representatives in the latest Associated Press college football released Sunday. The Huskies returned to the poll at No. 20. 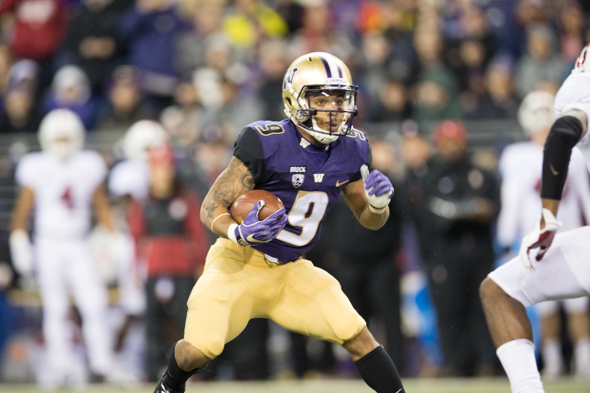 Washington’s 27-23 survival win over Stanford Saturday night at Husky Stadium vaulted the Huskies (7-3, 5-2) back into the latest Associated Press college football poll Sunday at 20th, a week after a 12-10 loss at Cal dropped them from the top 25. Washington State (8-1, 5-1), following a 19-13 win over Cal at Pullman, stayed put at No. 10. The Cougars were eighth in the first College Football Playoffs rankings released last week.

The schools are the AP poll’s only Pac-12 Conference representatives in a season remarkably lacking in dominant teams. According to Associated Press writer Tim Booth, the last time the state schools were the only Pac-12/10/8/Pacific Coast Conference teams in the poll was in its first year of 1936, when on Nov. 23, UW was No. 6 and WSU No. 20.

The Utes, Arizona, Arizona State and USC all have three conference losses.

The wins by the Cougars and Huskies kept on track a potential North Division title showdown in the Apple Cup Nov. 23 in Pullman. The Huskies have a bye Saturday, followed by a home game against Oregon State (2-7, 1-5). The Cougars play at Colorado Saturday (12:30 p.m. ,ESPN) and host Arizona Nov. 17.

If both schools win ahead of the Apple Cup, the winner of that game advances to the Pac-12 title game Nov. 30 at Levi’s Stadium in Santa Clara for a berth in the Rose Bowl.