The Seahawks had a dramatic chance to force OT. But the 25-17 loss was created by early defensive failures and a two-touchdown swing due to Russell Wilson errors. 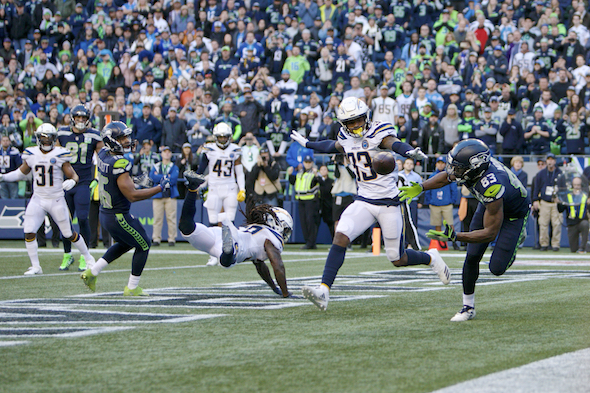 The best sports teams are able to do over and over that which they do best. Which explains how the Seahawks are 4-4 at the seasonal midpoint. A week after they were running with BMW smoothness for a win at Detroit, they came home Sunday for the first time in a month and blew gaskets, threw rods, overheated and under-performed.

Yet, the jalopy was right there at the finish.

And do it quickly. After losing to the Los Angeles Chargers (6-2) Sunday 25-17 (box), they face the varsity Los Angeles team, the 7-1 Rams, next Sunday at the Coliseum knowing they are mortally agitated after soiling their unblemished record with a 45-35 loss at New Orleans.

The Seahawks don’t yet have enough experience with each other, especially on defense, to be consistent. Which doesn’t mean that can’t happen by, say, December. Unfortunately for them, November’s intimidating calendar comes first, which could well kill this season’s playoff aspirations.

On the Chargers’ first two possessions, they went 94 and 83 yards for a pair of touchdowns. The drives basically won them the game, despite the late Seahawks rally that made the outcome more uncertain than the preceding 58 minutes established. The Seahawks had to play well to recover, and instead fell victim to self-imposed errors.

Misalignment and missed tackles allowed the Chargers a large number of explosive plays that looked unfamiliar to Seahawks fans used to the glory years, when ground was given by the handful, not the wheelbarrow.

“Yeah, I am surprised,” said DE Frank Clark. “I feel like we have a great defense, and great defenses don’t give up that many explosive plays. It was a poor effort on our part.”

Coach Pete Carroll put much of the blame on penalties.

“The game felt sloppy because of the penalties — ones that we could avoid,” he said,  “and just gave them free yards. That’s not the way we’ve been playing.”

It’s true the Seahawks committed 10 penalties for 83 yards. But the Chargers had 12 for 105, so the flags weren’t necessarily decisive.

Perhaps most pivotal Seahawks errors were two plays from QB Russell Wilson, fresh off the first perfect-passer rating (158.3) in the franchise’s regular-season history.

One was obvious: A 42-yard pick-six by CB Desmond King with 6:44 left that put the Chargers up 25-10. The second came earlier, on the first series of the third quarter, when Wilson at the Seahawks 39 ran up in the pocket to see a wide open WR Jaron Brown 25 yards downfield. A completion almost certainly would have gone for a 61-yard touchdown. Instead, he short-armed the throw by several yards.

“I didn’t realize he was as deep as he was,” Wilson said. “He was just right, and that was on me. I stepped up and it was just barely too short.”

Of the pick six, he said, “I made a bad read. He bolted underneath of it and made a good play. It won’t happen again.”

It’s happened to Wilson only twice before in his career. But big mistakes from the vets become acute for a team still on a learning curve.

The two young cornerbacks, Shaquill Griffin and Tre Flowers, were each torched for long gains, the latter a 30-yard touchdown pass from QB Philip Rivers to WR Tyrell Williams, and the former a 54-yarder to Keenan Allen.

Those burns are inevitable when a team decides to swap out expensive experience for affordable youth. That’s why it is incumbent upon Wilson to avoid two-touchdown swings, especially against a team led by the savvy Rivers. He was a modest 13 of 26, but the 228 yards were massive, especially paired with 160 yards on the ground, including 113 from Melvin Gordon.

“When we give them the turnover for the touchdown,” Carroll said, “that really winds up being the difference in the game. It’s unfortunate. It’s too bad.”

In the final two possessions, Wilson labored valiantly to make up. Absent top rusher RB Chris Carson, who missed the second half with a recurring hip injury, as well as RG D.J. Fluker (calf), the Seahawks trudged 54 yards in 14 plays to close to 25-17 with 1:53 left after a six-yard TD pass to Nick Vannett.

After the defense forced a three-and-out, Seattle took over with 1:10 left and no timeouts and reached the Chargers’ one-yard line with one last play at :00, untimed because it followed a Chargers penalty.

Regular-season games don’t get much more dramatic: A chance in the final two minutes for two touchdown drives and a two-point conversion to force overtime.

But another mistake, a false start by a veteran, LG J.R. Sweezy, pushed the Seahawks back five yards. Now absent a run threat, Wilson had to throw. WR David Moore flashed open at the back of the end zone. Wilson fired. CB Jahleel Addae lunged horizontally and appeared to get a fingertip in the ball, altering the flight just enough to cause Moore to misjudge it.

“We had a chance,” Carroll said. “We were right there.”

By the thinnest of margins, they failed. But the NFL is all about thin margins. The Seahawks did all the tough-guy stuff, not enough of the smart-guy stuff.

“It’s not enough to be physical,” said LT Duane Brown. “You have to be clean, you have to play smart football.”

Based on a half-season of evidence, there’s a good chance it will happen for these Seahawks. The problem is the Rams and the second half may happen faster.