Now it’s on to the Palouse and the big time 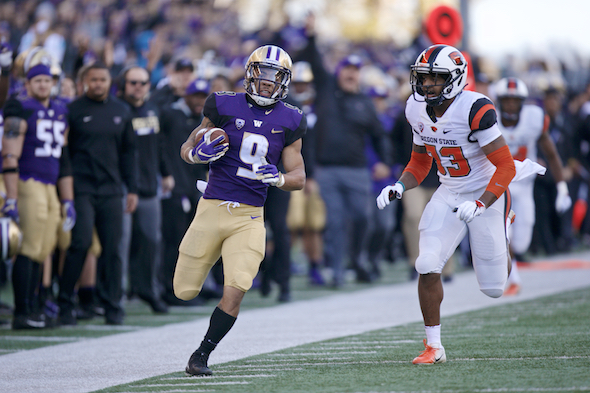 In the final Husky Stadium game of the season, the Washington football team said goodbye to 23 of coach Chris Petersen’s earliest and most accomplished recruits, hello to elite LT Trey Adams and slammed the door in Oregon State’s face.

The pregame senior ceremony lasted far longer than any suspense over the outcome. So did Adams’ welcome return from injury purgatory.

On a sunny yet chilly afternoon, the Huskies scored four plays into this Pac-12 Conference mismatch and didn’t take their foot off the pedal until they were well on the way to a 42-23 victory (box). Now it’s on to the Apple Cup, with far more at stake than state bragging rights — a conference championship berth and the inside track to the Rose Bowl are in reach.

“Bring on the Cougs,” QB Jake Browning said of the rivalry game. “I’m excited for it. There’s a lot on the line.”

RB Myles Gaskin and Browning, both four-year starters and two of the more prominent names now etched in the school and conference record books, appropriately were the final two seniors handed flower bouquets and introduced before kickoff. They made
sure to run off the field side by side once the game was over.

Browning, who jumped up on the edge of the stands and gave a young fan a hug before ducking into the stadium tunnel, became the winningest quarterback in Pac-12
annals by collecting a 37th conference victory, one more than Oregon’s Marcus Mariota and Stanford’s Kevin Hogan. Browning completed 17 of 23 passes for 242 yards and helped the Huskies generate 503 yards in total offense.

Petersen conceded it was an emotional moment for him in dealing with this particular group of exiting seniors before everything started, especially with Browning.

“I always think I’m not going to (get choked up),” the coach said. “I had a great talk ready. But halfway through it, I was looking at Jake Browning and it was over.”

Gaskin, UW’s all-time leading rusher, wasted no time in making things happen in his Husky Stadium farewell. He surpassed the 100-yard rushing level on just his third
carry, with barely five and a half minutes in, much of it coming on a 64-yard breakaway.

He then went from being on a pace to pile up an astronomical 800 yards on the ground to finishing with a more realistic 135 yards on 18 rushes, plus he scored twice, on a run and a reception. He’s now 39 yards from hitting 5,000 for his career.

“He’s just a rare, unique running back, for sure,” Petersen said in a post-game tribute. “He’s been exactly the same guy since he got here four years ago.”

The Huskies (8-3, 6-2) pushed across touchdowns the first four times they had the ball — to add a touch of irony to senior day, all of these scores went to opportunistic underclassmen.

Sophomore RB Salvon Ahmed picked up the first two TDs on a pair of four-yard runs, junior WR Aaron Fuller caught a 17-yard pass in the back of the end zone and redshirt freshman TE Cade Otton was wide open when he pulled in a 21-yard toss and fell backward over the goal line. All of this came in the first 12 minutes, and was good for a 28-6 lead.

The UW proved unstoppable on offense until it inserted Adams, arguably the team’s top NFL prospect but saddled with a preseason back injury that required surgery, for the
first time this season.

Early in the second quarter, he joined the huddle for 10 plays. A senior who has made his intentions known that he will finish his college career next year, Adams looked a bit rusty and out of shape as a couple of rushers got around him on the outside and one of them hit Browning as the QB let go of a pass.

Adams also played the first series of the second half before he called it a day, giving him 17 snaps in his return. It represented an important breakthrough just to get him on the field again.

“It was good to see him out there,” Browning said. “It’s been a long time coming.”

Gaskin put the Huskies up 35-13 late in the opening half when he caught a 10-yard TD pass from a scrambling Browning.

His coach wasn’t the only one feeling emotional about this final home game. After sprinting into the end zone, Gaskin heaved the ball into the crowd and drew an unsportsmanlike penalty, an infraction that didn’t affect his playing time against the Beavers but could result in a payback during practice next week.

Midway through the third quarter, Gaskin scored again, running out of the wildcat formation and over the left side of the line, going in untouched from six yards to put
his team up 42-16.

Oregon State made things somewhat interesting by trying a bunch of trick plays, as well as  busting through to create turnovers. The Beavers executed an onside kick and in the late going, blocked a punt. But it affected only the point spread, not the Huskies’ comfort level.

“They haven’t won a ton of games, so they had nothing to lose,” Browning observed.

Thereafter,  UW substituted liberally, even inserting junior LB D.J. Beavers, who received his first game action since getting hurt in the season opener against Auburn. The team’s five-man secondary played together for the first time in nearly three full games.

Even freshman LB Edefuan Ulofoshio from Alaska made his UW debut as a special-teamer. He forced a fumble on his first college play, and caused two Oregon State fumbles overall.

On the eve of their biggest game of the season, the Huskies seem to be getting well in a hurry and finding reinforcements where they didn’t know they had them.

Getting close to full strength is never a bad thing, especially for the Apple Cup.

“All of these guys are so important to us,” Petersen said of Adams and the others. “These kids know what we’re playing for now. We’ve got to play as well as we’ve
played all year.”