Rams’ 54-51 win over the Kansas City Monday night was riotous entertainment. But the Seahawks prefer the sobriety and propriety of a team led by defense. 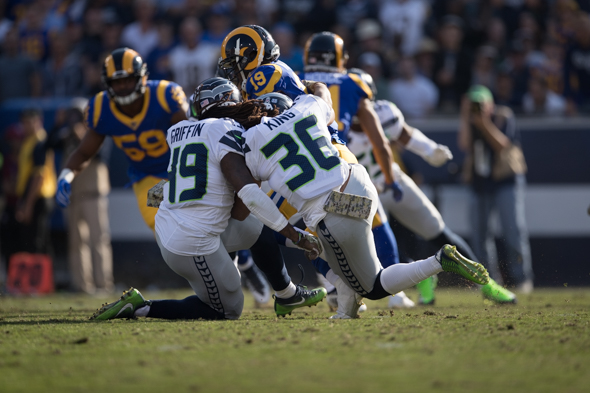 A drunk pro football game broke out Monday night. Lots of outrageous moments, hilarious episodes, embarrassing acts and questionable judgments. You know, like the office Christmas party when someone spikes the punch with Fireball.

In the Los Angeles Rams’ 54-51 ammo-dump explosion over the Kansas City Chiefs, team and individual marks and milestones were everywhere. The 105 combined points were the third-most in NFL history. It was first game in which both teams scored 50 points, and thus the first time a team lost scoring 50 or more. The 14 combined touchdowns tied for second-most in league annals.

For a much-anticipated match-up of two 9-1 teams, the spectacle exceeded the hype. The sports world powered through a massive hangover Tuesday to talk about it. But around the Seahawks, where defense traditionally keeps everyone sober, the Coliseum show was looked upon a little like the nerdy intern who got plastered for the first time.

“You hear everybody saying what a great game it was,” said defensive coordinator Ken Norton Jr. “I’m thinking, defensively, that’s a lot of points. How can that be the greatest game? ‘Cause somebody’s not happy.”

“No matter how good the offense, if you don’t have a good defense, you ain’t gonna win,” said LB Bobby Wagner, harrumphing.

Said coach Pete Carroll, “Some really good defensive coordinators are on those staffs too. I want you to know that they were coaching ball last night. The offenses were just crazy . . . ”

When comes to ball, Seahawks culture finds an outlandish display of points unseemly. But with the steady changes in NFL rules allegedly to improve player safety have come restrictions on defense that have juiced offensive numbers across the board, not just Monday in LA.

The season so far has produced the most average points per team, per game (24.2) in NFL history. Same with average total yardage (361) per team, and passing yards (248.8). The improved protections afforded quarterbacks have increased the courage to stay in the pocket for an extra beat, helping produce the highest number of scoring drives per team (37.5 percent) in history. In 2017, the number was 33.4 percent.

“They want to take away your aggressiveness as far as hitting the quarterback, even after he throws,” said DE Quinton Jefferson. “You want to hit them as much as possible. If you hit them enough, maybe they’ll second-guess stepping into the next throw.

“It’s having an effect on the game.”

Carroll said the rules changes may contribute some to the increased offensive success, but they have not been the driver for the uptick.

“I don’t think that’s the reason,” he said. “I think it’s just ball continuing to evolve in the throwing game. The level of play of the quarterback position continues to evolve. When you look at (the Saints’) Drew Brees, he’s maybe having his best year ever, and he’s been playing for forever.

“I just think this is just a case of evolution. The most difficult part for defenses is there’s just no (use of) hands – you can’t grab anything at all. That used to be somewhat allowed. But that’s a stricter (interpretation). You saw a lot of penalties last night just (for) illegal hand stuff, guys trying to stay with people. So that’s part of it.”

But since the changes are universal, Carroll is not grieving.

“It’s all fine, you know,” he said. “It’s just the way it is. It’s relative. We’re coached and officiated the same, so it doesn’t matter.”

But nothing that happened Monday, or this season, or in the time since the defensive-contact rules have changed, has caused Carroll to hire a coach from a spread-offense college to come teach him the the future the game.

He’s persuaded that his 1949 Dodge truck can win a Formula One race.

“You know, I don’t mind being different at all,” he said. “I didn’t mind it when we were in college, either. We weren’t spreading out and doing all the stuff that other people were doing. We were running a pretty balanced attack, and ran for a lot of yards (with) a lot of big-time running backs. I think it’s a great way to play.

“When I look at college football and look at the way that (Alabama coach Nick Saban) is doing his stuff there, they are still a very formidable running attack. When you’re playing all spread teams week and week out, it’s a big transition for (opponents). Being unique is OK, particularly when you’re being aggressive and tough.”

The key to surviving games against high-octane teams like the Rams, Chiefs and Saints is turnovers, not the denial of yardage. The Rams gave up 478 yards, but won because they forced rookie QB Patrick Mahomes into five turnovers — two fumbles, three interceptions — and three sacks and scored two defensive touchdowns.

If there’s anything particularly worrisome for Carroll heading to Sunday’s game at 6-4 Carolina (10 a.m. PT, FOX), it’s the three-game absence of turnovers.

“I’m really disappointed in that,” he said. “It’s been difficult. It makes it harder to win and harder to get ahead and stay ahead without getting football off of our opponents.

“We had a pretty good roll going there and then it just kind of got quiet. So what I take of it is, it’s something that just needs to draw even more emphasis. We’re trying to make it our number one emphasis.”

Seattle is still a plus-seven in takeways, fifth in the league. But it’s a road game with the dreaded early East Coast start, and the Panthers have lost two in a row. Each fumble grabbed or pass stolen will be magnified.

The Seahawks have won 12-7 games against the Panthers in Charlotte before (2012, in fact), and would be thrilled to do so again, leaving the cool kids in LA and KC to light up the night.

“Regular season games (like Monday night) are cool,” said Wagner, “but when it gets to playoff time, the best defense wins.”

Ask the team 2013 Denver Broncos, which set the NFL record for points, how that season turned out.