Richard Sherman is a friend, mentor and idol to many Seahawks, so while the 43-16 beatdown of the 49ers was a delight, the reunion was a little awkward. 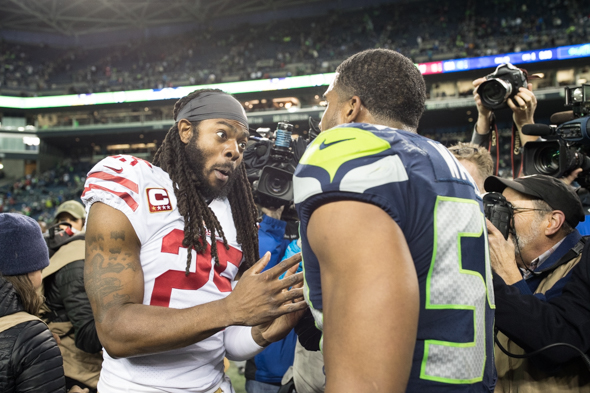 Earlier in the week, Richard Sherman described the Seahawks as a “middle of the road” team. Which, on the Sherman Scale of Agitation, is mild. By Sunday afternoon, his 49ers were road kill. That was not mild. It was almost pitiful.

Truth be known, as much as the 43-16 triumph (box) over 2-10 San Francisco upgraded the Seahawks’ playoff bona fides, the degree of beatdown was, for most players, awkward.

To many, Sherman remains a friend, mentor and idol. Right or wrong, the coldness of his Seattle departure shook them all. In taking the first offer he received he free agency in part to haunt his old team twice a year, Sherman had a huge pay cut, rehabbed his torn Achilles tendon intensely, then came to a team that has been ravaged by injury and so embarrassed by a valuable player’s conduct that the club fired LB Reuben Foster in mid-season.

Sherman played the entire game Sunday with a battered unit and didn’t record a single stat. Sure, the Seahawks’ playcalling stayed away from him, but his one primary chance for a tackle was blown when his good friend, WR Doug Baldwin, caught a short pass over the middle and turned it into a big gain when Sherman failed to wrap him up.

He was also in coverage in the fourth quarter when WR Jaron Brown dove in the end zone for an 18-yard touchdown pass to bump the lead to 34-10. Sherman never was close.

Afterward, Seahawks players, coaches and staff sought him out in the field for handshakes and hugs. Bobby Wagner, who blew past him on the sidelines as the linebacker was making the longest scrimmage play in franchise history, a 98-yard interception return, indulged in some good-natured trash talk.

“He was telling me I was slow,” Wagner said, grinning. “I was telling him if I’m slow, then what does that say about his team?”

Moments later Baldwin found Sherman. The friends, together at Stanford and then for six years in Seattle sat down on the field and exchanged jerseys, surrounded by cameras.

“We haven’t seen each other for a very long time,” Baldwin said.  “This is the first year I’ve been without him for over 10 years. It was emotional.”

Baldwin even devised what he called a “tribute to my boy” — a first-quarter TD celebration that mimicked Sherman’s legendary tipped pass in the 2014 NFC Championship against the 49ers that sent the Seahawks to the Super Bowl.

But to some onlookers who don’t share Baldwin’s affection for Sherman, it seemed a little like mockery, especially since it happened on the same spot in the end zone. Even Baldwin acknowledged the mixed message.

“I know it’s kinda weird — we’re scoring, he’s on the other team, we’re doing a tribute — but that was in our hearts,” he said.

Told you it was awkward.

Two Seahawks figures that have been targets of Sherman’s dismay described their pre-game encounters.

“I saw him pre-game,” said Wilson. “Just said, ‘What’s up?’ real fast. That was it. I think we were both focused on getting ready.”

Said Carroll: “We talked in pre-game. He was good. We just said hey. It was exactly the way you hope it would be.”

Certainly, it was better than throwing hands. Carroll let his team do the punching.

Mildly chastised during the week by Sherman for having once thrown five interceptions in a game, Wilson lit up the 49ers secondary with four touchdown passes, and nearly had a fifth. Wilson had a freakish line — 11 for 17 for 185 yards, no turnovers and a QB rating of 140.2, including three touchdowns in just six first-half pass attempts.

“He played well,” Sherman said, then slid in a little dig: “I think he threw for 160, 170 yards, so  . . . their running game is really effective, and they let him get to his spots and kept the game plan simple.”

Now you may regard all of this as soap-opera pettiness. Partly true. But there’s no getting around the whimsy of the schedule that has the Seahawks and 49ers playing in San Francisco in two weeks. The wounds from this game still will be fresh.

By then the Seahawks will have played Minnesota, their guests Monday night for a match of large playoff importance. If the 7-5 Seahawks, who advanced to fifth place in the NFC playoff standings following a 24-10 loss by the Vikings (6-5-1) at New England Sunday, beat Minnesota, they will be in charge of their wild-card fate.

“It doesn’t mean anything,” Carroll said of the current standings. “We haven’t done anything.”

Not quite true, but good coach-speak. The Seahawks have done a little something. They have refuted a charge by Sherman in the off-season that “the Seahawks have lost their way.”

Much remains to proven — and they may have to prove it without RG D.J. Fluker, who came out in the fourth quarter with a hamstring pull of unknown severity — but the Seahawks seem to have achieved the offensive balance so long sought. Many times when defenses overload to stop the run, the Seahawks have an answer. The 43 points were a season high, with an increasing percentage of explosive plays.

The defense missed numerous tackles Sunday, but any time they have Wagner the whirlwind, all stops are possible.

He had 11 tackles, two for loss, two defensed passes and a fumble forced and recovered. Plus the first pick-six of his career.

Said Carroll: “He’s playing as good as you can play the game.”

With four minutes left, Wagner made a leaping grab of hard throw from 49ers QB and third-stringer Nick Mullens to thwart a touchdown, then had to out-run the quarterback along the sidelines at midfield.

“I was just trying to make sure the quarterback didn’t catch me,” Wagner said, “because if he did, everyone was going to give me a little crap.

“It was extra nice to be running along the 49ers sideline. I tried to look at Sherm, but I didn’t see him.”

He’ll be able spot him again in two weeks. After the beatdown Sunday, the look best not be heavy-lidded. 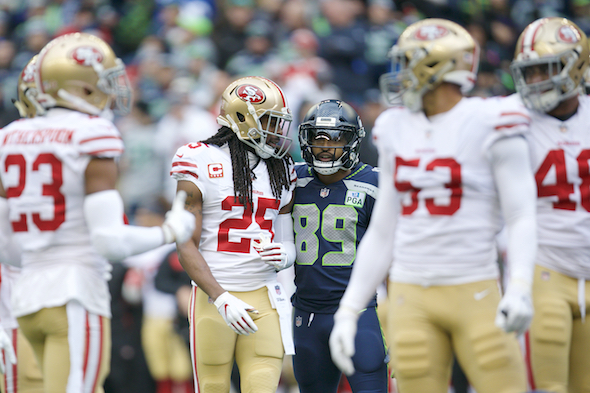