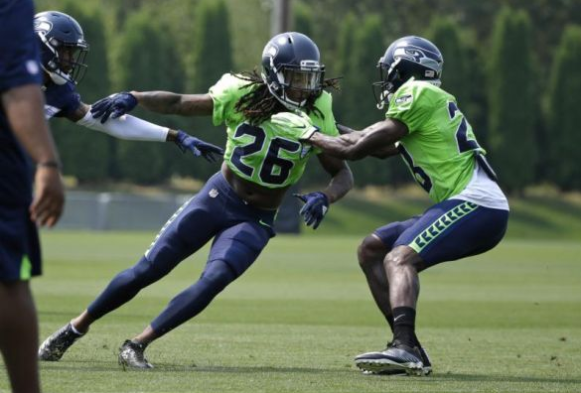 As much delight as the Seahawks drew Sunday from their 43-16 rout of the 49ers and Richard Sherman, something stood out like the first scratch on a new car — 386 passing yards allowed to third-string QB Nick Mullens.

CB Shaquill Griffin was candid about what he thought happened.

“I felt like we kinda let up,” he said. “We stopped the run, got up early, then let them have easy yards here and there. I don’t think we’ll let it happen again.

In fact, it looks worse heading into Monday game against the Minnesota Vikings, whose offense behind new QB Kirk Cousins can’t wait to light up the night against Seattle’s tender young secondary.

Cousins, master of the dink and dunk, has the third-most pass attempts in the NFL (491) and the second-highest completion rate (71.4), in part because the Vikings mostly throw short — the 7.1 yards per attempt is 22nd in the league. That also means interceptions are few — nine.

The Seahawks’ secondary has to find a way to disrupt, and Griffin is eager to participate. Because for much of Griffin’s second season, he has been quiet.

Asked if he has met his own expectations for the season, Griffin said, “Personally, no. I want to get my hands on the ball more. I feel like I’ve been playing safe lately, and I want to go back to the aggressive way I’m used to.”

“He’s played good, solid football,” he said. “He’s been out there the whole time for two years, and stuff is going to happen. It’s going to be hard at times and he’s been really consistent.

“He hasn’t been a problem to us, but there’s always more plays that you can make. I think he’s doing fine with it. But there’s stuff that we’re going to keep working on. He’ll be better in the next couple of years.”

Griffin has missed some tackles and has been out of position occasionally. And he no longer has Sherman to lean on. The other cornerback position is manned by a rookie, Tre Flowers, and second-year free safety Tedric Thompson has replaced Earl Thomas.

On-the-job training has been going on all season.

“We play a lot of young guys and they’ve been able to do it,” Carroll said. “But to really take advantage of it, it takes a couple of years, so you can start to understand situations and the opportunities that are presented.

“The technique part and playing consistently solidly, we can kind of get that done early. There’s a jump in there that can happen if the guys have it in their makeup to go and take advantage. But they’ll develop in time. They’re going to get better, they’re going to see things more.”

It would help the Seahawks if they got better by Monday, because Adam Thielen and Stefon Diggs are about the hottest receiving tandem in the NFL. Thielen leads the NFL in receptions (98) and is second in yardage (1,166). Diggs is sixth (84) and 2oth (839).

The need for some ballhawking by Griffin is numerically evident. He has been credited with just five passes defensed, and his two interceptions came in the same game, at Chicago.

The Seahawks have 12 interceptions, but three were by Thomas, who’s done for the season, and one each by DE Frank Clark and LB Bobby Wagner, the latter returning his pick last week 98 yards for a touchdown. It was Seattle’s first defensive score of the season.

The five DB starters have combined for seven picks: three by SS Bradley McDougald and two by Griffin, one each for Thompson and Justin Coleman. Flowers has yet to break his maiden.

Griffin also lamented the missed tackles in the secondary against the 49ers, including one by Flowers that turned a 20-yard reception by Dante Pettis into a 75-yard touchdown.

“We were out of place, but we still gotta make that tackle,” he said. “Receivers get paid to catch the ball, but we gotta stop them. I haven’t seen a game where receivers had zero catches, but we gotta tackle them. We had nine or 10 missed tackles. That’s not like us. That’s another part of letting up.”

In a team meeting this week, Griffin said that he spoke up about wanting to play more man to man coverage.

“We haven’t run as much man as we used to do, which is fine, because it helps our defense,” he said. “But I mentioned I wanted to go back to man with a chance to go against Diggs and Adam Thielen, great receivers I want to be in competition with.

“Last year we had Sherm and played really aggressive, and that’s what I’m used to. I mentioned it for the game plan.”

The Vikings make it hard because they go deep only occasionally.

“They try to get it out quick, so we’ll cover them tight,” he said. “We always are focused in taking away the deep ball, but we gotta take away the itty-bitty passes.

“We got some nice stuff cookin’ up to get the ball in our hands. I’m really excited about this game plan. I think I might get a chance to get my hands on some balls.”

Monday night is always a good time to showcase, particularly if you are eager to avoid being remembered for letting up to get lit up by Nick Mullens.