After starting twice in four years at USC, RG Jordan Simmons has started twice for the Seahawks, and they had their two highest rushing totals in 2018. 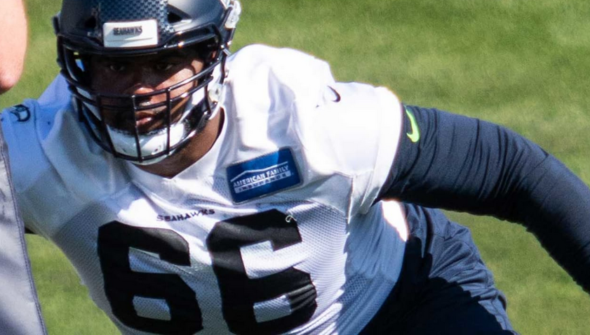 With three regular-season games remaining, it’s remarkable that the Seahawks have only to beat the 49ers (3-10) Sunday to clinch a playoff berth with time to spare in the regular season. After all the changes in the off-season, the Seahawks figured to be minnows spooked by even the shadows of NFC sharks.

Almost always in these NFL stories of the unexpected are a few obscure players delivering goods beyond their apparent means. The Seahawks’ most extreme current example is Jordan Simmons, the starter Monday night at right guard, from where he helped the offense gain 214 rushing yards against Minnesota to counter the exceptionally meager 72 yards passing from Russell Wilson.

The rushing total was noteworthy because the previous time Simmons started, at Los Angeles Nov. 11 against the Rams, the Seahawks ran for 274 yards. Those ground totals were the best two of the season for Seattle, the league’s No. 1 rushing outfit, and came against two of the best run-defenders

The unit is hovering near the peak of ground-game achievement: The often-pilloried offensive line is winning the play-by-play battle even when the defense knows what’s coming.

“We know that they know,” said C Justin Britt. “Question is: ‘Are you going to stop us?'”

That answer increasingly has been Oh. Hell. No.

Simmons is not mostly responsible for the production; not close. But the fact that he has slipped in free of disaster is fairly astonishing because his two starts — in place of injured dreadnought D.J. Fluker —  equaled the number of starts he had in four years at USC.

A heralded recruit out of Crespi High in Encino, CA., Simmons redshirted his first year with the Trojans, then had knee surgery. In 2013, he hurt the knee again, missing the final six games of the season plus the first two in 2014. One week later, another knee injury, wiping out the the rest of 2014.

Then for 2015, the Trojans shifted him to defensive tackle. A mistake.

“It wasn’t working out for me,” he said Wednesday before practice. “I was out of it mentally. I didn’t want to continue football. I wanted to quit. There were definitely days like, ‘I’m over this. Did my best.'”

Simmons stuck with it, playing 13 games in 2016, starting twice. He was, after all, still 6-foot-4, 340 pounds and surprisingly agile. The Oakland Raiders saw enough to sign him to their practice squad as an undrafted free agent. He didn’t play in 2017.

On cut-down day in 2018, the Raiders, masters of the misjudgment, cut him. But before Simmons fell again into despair or another team, the Seahawks quietly added him to the 53-man roster Sept. 2.

“I was pretty happy about that,” he said. “I knew it was a good team. Then there’s Pete Carroll, USC, obviously. I’m finally happy to be with him. It would have been great if he was my coach at USC. But somehow, some way . . .”

Carroll wasn’t planning to put Simmons on the practice squad, because he wanted a road grader for the re-emphasized ground game in case Fluker’s long history of small injuries compromised his 350-pound body.

“Coming out of USC, it was hard to evaluate him highly,” Carroll said. “Playing for the Raiders, he looked like was capable. He was 338 and moved better than a  guy that size should move.

“We had hopes when we picked him up. When we saw him work, he elevated our expectations. It’s been quite a journey for him.”

The apex moment came against the Rams — his first career start on his college home field of the Los Angeles Coliseum, with family in attendance.

“That was an emotional game for me, after what I went through in college,” he said. “I had dark days. Never thought I’d see this opportunity.”

Of Simmons’ play against the Rams and Vikings, Carroll said, “Those are two terrific fronts with really good players, and he held his own. We’re playing him because we think he’s going to do a good job and he’s been able to handle it.

“He hasn’t been perfect, but he’s certainly shown that he can hang in there. It’s really a positive expression he’s made for our team and for his future with us.”

Finding overlooked talent is critical for a team such as Seattle, which has been slammed up against the salary cap after years of paying expensive veterans. Carroll said scouts are assigned to know every player on each team’s roster, steadily updating evaluations, and on cut-down day, “the internal wire” at team headquarters hums.

“It’s a really big science for us,” he said. “(General manager John Schneider) is great at it, He has good sense for what’s happening with other teams. Sometimes you get surprised, someone is out there you think wouldn’t be.

“John will call and say, ‘We got a guy you might want to take a look at.’ If we can keep the energy going for the guy, then we do it.”

Simmons still has much to learn. As with Fluker, he’s not a great pass blocker. It’s part of the reason the Seahawks need to cut down on pass attempts. According to Pro Football Focus, of the Seahawks’ 24 pass plays Sunday, Seattle gave up 10 pressures, the fourth-worst pass blocking efficiency in the NFL this week.

But having a fresh power-run scheme under new offensive coordinator Brian Schottenheimer and new line coach Mike Solari makes things easier for a newbie to pick up.

“I think it’s everything,” Britt said. “We’ve been working for this kind of moment since the spring. We tweak some plays, then whenever we get the week’s game plan, it’s kind of like a review.

“Where Solari, Schotty and the other coaches excel is in a game plan that has us prepared. At game time, no second thoughts.”

It appears to have illuminated for Simmons a surprisingly short path from dark days to Monday night’s bright lights.

Upon his return from an eight-game suspension by the NFL, LB Mychal Kendricks was amped to start against Minnesota Sunday. But after 44 snaps and five tackles, his season is over. He was put on the injured reserve list Monday, ahead of surgery to repair a tibia broken late in the first half.

Somehow he played through the second half of the 21-7 triumph, his fourth game with the Seahawks as he navigated the consequences of his admission to felony insider trading in 2015.

“He just got hit on the outside of his knee and it’s got him,” Carroll said. “In unbelievable fashion, he finished the game. He fought through it the whole time. It’s just been such a difficult season for him. My heart goes out to him. He wants to be part of this thing so badly. He doesn’t get to this time around.”