The Seahawks are last in the NFL in pass attempts, but sixth in yards per attempt. How? First Carrollians: “Thou shalt have no other gods before the run.” 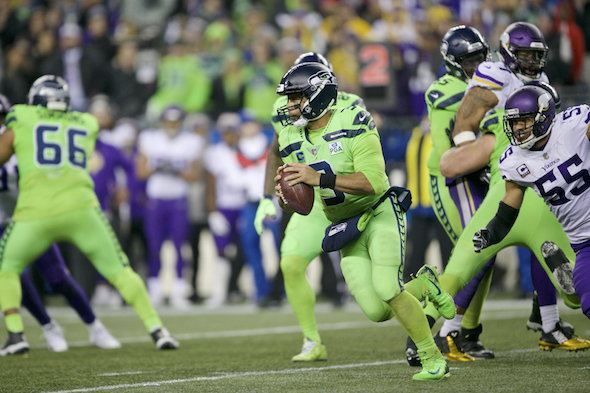 Russell Wilson has completed only 21 passes total in the past two games. So what? / Drew Sellers, Sportspress Northwest

The renaissance of the rushing game has been the story of the Seahawks season. It took a long time and many resources to back-fill the void left by Marshawn Lynch. But here they are, needing only a win Sunday (1:05 p.m., FOX) in Santa Clara against the 49ers (3-10) to clinch a playoff spot with two weeks to spare, a development as freakish as finding a street  in downtown Seattle free of orange cones.

Not as freakish, but still weird, is the seeming shrinkage of the passing game, to the point where in the past two games combined, 320-pound tackle George Fant has more receptions (one) than the No. 3 wide receiver, well-regarded youngster David Moore.

Teams such as the Steelers, Colts and Vikings get 12 completions between “home of the” and “brave.”

Given the oft-cited commandment in First Carrollians — “thou shalt have no other gods before the run” — the fact that the NFL’s No. 1 rushing team has smaller passing numbers is no surprise.

But 11 completions against the Niners in a game in which Seattle had 43 points? And 10 completions in a Vikings game that was 3-0 until 13 minutes remained? And now, dead last in the the NFL in pass attempts (346, 204 behind the No. 1 Steelers)?

Fred Flintstone looks at Barney and says, “Barn, this is old school.”

There is another way to look at it. The sacred texts are inviolate: The Seahawks have a formula that produces as close as an NFL team can get to an idiot-proof game plan.

The successful emphasis on earth over sky is reflected in some seasonal team rankings that are illuminating.

Using the run to set up the pass means fewer chances for mistakes (interceptions, penalties, sacks), better success when throwing and greater uncertainty for defenses later in games when fatigue combines with play-action misdirection to create openings.

Never was there a better example than in the fourth-quarter drive that produced the game’s only offensive touchdown.

With a tenuous 6-0 lead, and at their own 37-yard line with 5:38 remaining, the Seahawks ran the ball every play, seven in a row — six by RB Chris Carson for 23 yards (the final two for the TD), and one game-breaking, play-action scramble by Russell Wilson for 40 yards, when the Vikings forgot about containment.

Then for the two-point conversion, the Seahawks crossed up the heavy-legged Vikings with a pass to open WR Tyler Lockett.

The drive was physically demanding on both sides. Said Carson afterward: “I was just tired. I just wanted to get into the end zone so I could go back (to the sidelines).” It was worse on the defense.

Vikings coach Mike Zimmer sounded a little bewildered after learning the Seahawks had rushed for 214 yards.

“I didn’t think we were playing the run that bad,” he said. “They are a good running football team. These are good, hard running backs. If you don’t get in there and get physical with them, they’re going to gain some yards.”

Physicality gets harder later. Here’s how Carson put it:

“We believe that the first three quarters don’t even matter in the sense that you win the game in the fourth quarter. We know if we do right longer, it was going to turn up in the end.”

Pete Carroll, the grid prophet who co-authored the ancient scrolls, again explained post-game Sunday the truism handed down through the generations.

If you don’t emphasize the running game, it’s really hard to call on it when you need it,” he said. “That’s why you’ve heard about the commitment — so strong for so many years.

“If they  can’t stop you, you don’t need to throw the ball and take any chances.”

Regarding Sunday against the 49ers, who have a league-worst minus-21 turnover ratio, he seeks to demonstrate another commandment from First Carrollians:

“Though shalt covet thy neighbor’s football.”