Thiel: Seahawks and the rule of randomness

If Janikowskl does Job One and makes an extra point, no one is lamenting a club-record 14 penalties and 148 yards. Instead, Seahawks world is convulsed. 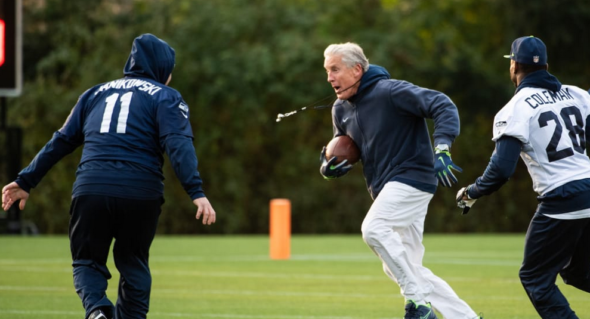 What did Seahawks coach Pete Carroll have to say about Sebastian Janikowski?

“Seabass was a little late with the kick. He took a little extra time, and it threw the timing off a bit. That was the difference in how the ball flew.”

Oh wait. You meant on the next play.

That’s when Janikowski’s aimless abandonment of all football principles that let San Francisco’s Richie James pass untouched into the end zone after a 97-yard kickoff return, which made the one-time “Polish Cannon” Sunday’s national sports joke?

Embarrassing as it was, 10 other Seahawks special-teamers contributed to putting Janikowski in a place he has almost never been in his 18-year NFL career — playing actual football.

But the missed PAT kick? For all the subsequent wailing about Seahawks’ penalties that did them so dirty in the 49ers’ 26-23 upset triumph, none of it would have mattered in a game that ended 23-23 in regulation if Janikowski made the kick after Seattle scored a touchdown on its opening drive.

The missed point was all about one guy not doing Job One. His miss loomed over the game like a Space Needle-sized exclamation point.

Had Janikowski made a move toward James instead of running past him, Jones likely would have outmaneuvered him.

“I wish he would have tried anything,” Carroll said morosely Monday after reviewing the defeat, a task he described overall as “a hard film to watch.”

The only saving grace is that at 40, Janikowski proved that it wasn’t just the young players who screwed up a game in which the Seahawks outplayed the 49ers in nearly every important football data point. Except the one that counted.

“The first thing a kicker has to do is turn the guy back into the field; he got that done,” Carroll said. Then, “anything. We’ll take anything. Because it wound up being a touchdown. He could do more, and he feels bad about that.”

Not sure how Carroll knows that. Because when he was asked if he talked to Janikowski, he said no. Since Janikowski rarely talks to media, the explanation may have to await an exposition on another return of The X-Files.

“He’s not going to be a great open-field tackler,” he said. “That’s not what our expectations are.”

But he could have run at James. Or fallen. Or yelled, “Boo!”

Hilarious and pathetic at the same time, Janikowski’s non-play was just one of numerous palm-to-forehead moments that ended mysteriously a four-game winning streak ahead of a much-anticipated Sunday night, nationally televised match-up with AFC kingpin Kansas City, a 2.5-point favorite at the Clink.

Besides Janikowski’s fresh place in the Seahawks Hall of Dubious Moments, more astonishing was that the Seahawks had holding penalties by linemen on each of their final four possessions of the game over a nine-minute span: LG J.R. Sweezy with 7:12 remaining, RT Germain Ifedi at 2:49, RG Ethan Pocic at :54, then again with Pocic at 8:46 in the extra period.

Carroll was particularly galled because fourth-quarter efficiency is a prideful emphasis with him.

“Really disappointed in that, because that’s about finishing and doing right,” he said. “It just didn’t happen. That’s too bad, because we’ve spent a lot of time and a lot of emphasis in trying to finish games by doing the right things.

“It was really clear to these guys and everybody felt bad about their part in it. Coaches too. We’ll try to get it cleaned up this week.”

That would be helpful, because players, fans and media, as with nearly everyone else, can’t get minds around the concept of randomness. There needs to be causation and connection, because otherwise we are helpless in the maw of a ravenous universe.

I submit connection is not possible.

There is no link between an accidental grab of a face mask by LB Bobby Wagner, a block in the back by special-teamer Malik Turner and an argument between CB Neiko Thorpe and a 49er. The calls may have been right or wrong, but the incidents stand alone and independent in error.

“The more we look at it, the more unusual it was,” said Carroll, who intimated that the 10 penalties in the second half suggested “something had changed” with the officiating.

No. There is no conspiracy to help the 49ers win. Stop it.

The Seahawks had more than their share of misplays that denied them a good result. So many that some barely registered, such as Tyler Lockett’s muff of overtime’s opening kickoff.

The ball slipped through his hands at the goal line and off his legs forward to the 11-yard line, where he barely beat the 49ers to the recovery. Seattle did nothing with the lousy field position and punted away the ball, which the 49ers took to the game-winning field goal.

He said Lockett saw a low kick as an opportunity for a solid return.

“He’s famous for not mishandling the ball,” Carroll said. “He was going for it and didn’t track it as tightly as he needed to.”

Just another random mistake in a random universe.

“Without the penalties we would have won the game,” he said. “Not like any mystery of what happened.”

True. But the issue was never what happened. It was why it happened — 14 times.

It was coincidence. But don’t tell a football coach or fan that, unless you enjoy seeing someone’s head explode.