The hard saga of Kaleb McGary, the Pac-12’s best O-lineman, closes out its Huskies chapter at the Rose Bowl: “Holy crap. I did all this. Here I am.” 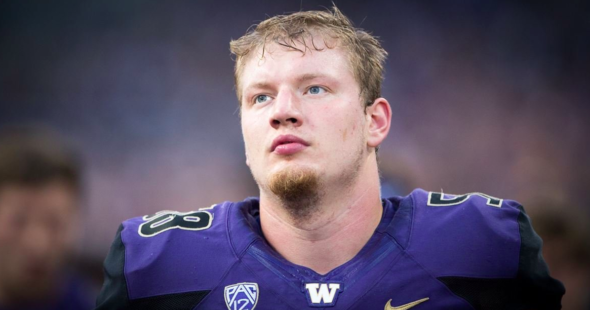 Kaleb McGary made the most out of his second choices. / 247sports.com

PASADENA, CA. — Truth be told, Kaleb McGary didn’t want to be an offensive lineman. Nor was he wild about going to college in the ginormous city of Seattle, where there was way too much concrete for his country-boy tastes. A better fit seemed to be the University of Wisconsin in small-town Madison, where every third mammal in the state was a cow.

But five years later, his second choices — right tackle and the University of Washington — turned out OK.

He didn’t quite know how well until earlier in December, when he was selected as the winner of the Morris Trophy, an annual award that goes to the best offensive lineman in the Pac-12 Conference — a selection made more impressive because the voters are fellow players.

The news arrived awkwardly. In the shower after practice.

“I said, ‘Hey Kaleb, congratulations,'” said Trey Adams, the other half of the Huskies’ twin peaks at tackle. “He said, ‘What for?’

“You won the Morris Trophy.”

“I don’t pay attention to that kind of stuff,” he said. “I wasn’t expecting it. But it’s awesome. Incredible. I’m grateful and honored.”

Particularly after thinking, as a defensive lineman graduating from Fife High School, that playing offense was kind of a dorky thing to do.

I didn’t want to play O-line,” he said. “Offense sucks, defense is fun.

“(Coach Chris Petersen) approached me in spring and asked me if I was interested. I said, no thanks. What could they do? Send me to defense?”

But gradually McGary came around. At 6-8 and 324 pounds, he fit the physical and the psychological profile for offense.

“I saw the light,” he said. “I just kinda felt out of place on defense. I started out Darth Vader. Now I’m Luke Skywalker.

“On offense, you physically remove an individual from here and put them over there. They don’t get a vote, and it’s legal. It’s an eviction notice.”

As you can tell, McGary is a guy who enjoys himself, his place and the moment.

The next moment will start at 2 p.m. Tuesday in Pasadena, when the No. 9-ranked Huskies (10-3) kick off against 6.5-point favorite and sixth-ranked Ohio State (12-1). It’s the the fifth bowl for McGary, and ninth in a row for Washington, but the first Rose Bowl for the Huskies in 18 years.

“I think I was three or four years old,” Adams said, eliciting groans from a few more senior media members at a recent interview session at Husky Stadium. “The Rose Bowl means a lot. A chance to show the country we’re a top team.

“If we can grab this, Jake Browning and Myles Gaskin are going down as two of the best ever. I’m just fortunate to play alongside such good teammates.”

Browning and Gaskin are equally fortunate to have been protected by McGary and Adams for most of the past four seasons. Linemen never get the pub, but they get the love of teammates.

After missing eight games with a back problem, senior Adams will get another season. McGary will be moving on to the NFL, and will be sorely missed.

“Anytime you have a guy who is consistent, from a play standpoint and an attitude standpoint, it changes a locker room,” said offensive coordinator Bush Hamdan. “You see a guy who’s gone through a lot, but comes here every day with a positive mindset. Guys like that set a tone for three or four years after they’re gone. People won’t forget what he’s been through, and how he’s focused on the classroom and field.”

What McGary has been through could fill a manuscript for a soap opera, chronicled well here in 2016 by Adam Jude of the Seattle Times.  McGary had three episodes of heart arrhythmia in high school that have since been largely resolved. His father, Justin, was diagnosed with multiple sclerosis. The health travail helped cause the loss of the family farm near Vancouver, WA. They were forced to move to Fife, to the childhood family home of his mother, Cassandra, where they found her late parents had become hoarders.

In January, a fire in the home damaged about half the structure. Without insurance, the family has done most of the repair work, although only a couple of rooms have electricity.

“It takes a special kind of person to battle in the trenches,” he said of his O-line work. “I take pride in being one of those.

“I’m very proud of the work I’ve put in. It’s like walking a really long road and turning around, the saying, ‘Holy crap. I did all this. Here I am.'”

The national media story at this Rose Bowl is about Urban Meyer, the controversial Ohio State coach who announced in early December he was retiring at 59. Part of the reason was health-related. Part of it was a scandal that caused the school to suspend him for three games this season after he mishandled long-running domestic violence complaints against an assistant coach.

Much of the sports world outside of Columbus sees Meyer’s football history as that of a college-football scalawag who often indulged the worst aspects of a largely corrupt industry. But the Buckeyes players see the Rose Bowl as a chance to send him out gloriously against an over-matched Huskies team.

McGary and a healthy Adams, along with a healthy tight end, sophomore Hunter Bryant, likely have been working on counter-measures previously unseen this season. It wouldn’t be a bowl game without one of Petersen’s exploding cigars.

However the game plays out, there also are stories like McGary’s. The happiest ending would be for him to walk off the storied sod healthy.

“It’s come to the time where I think about my future,” he said. “Despite my philosophy of one thing at a time, the time has come. I’m very excited at the prospect of playing in the league and getting paid.

“I can continue to play football, and help my family.”