Coach Chris Petersen said “it’s on me” to fix the offense’s problems that spoiled Washington return to the Rose Bowl in a 28-23 loss to Ohio State. 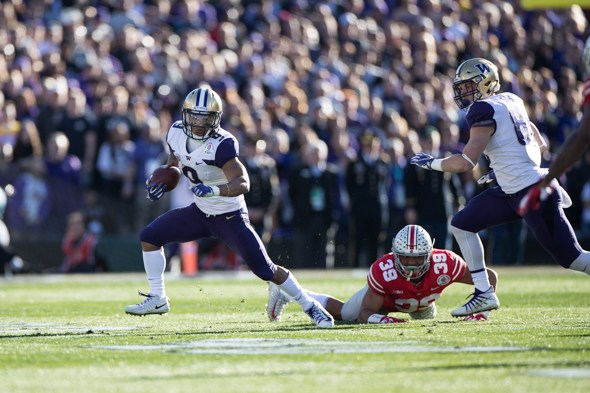 PASADENA, CA. — It’s not fair to say the Washington Huskies came all the way across an 18-year void for naught. But it is fair to say that that the Pac-12 Conference champions came away with little from the Rose Bowl Tuesday afternoon, because they showed up with neither plan nor purpose sufficient for such a large occasion.

The fourth-quarter comeback was something of a fig leaf. It didn’t hide the fact the offense, loaded with senior experience, couldn’t do much until sixth-ranked Ohio State (13-1) eased up after a 28-3 lead.

Worse, it was repeat of a season-long pattern of slow starts — as well as in previous New Year’s Six games in the Peach Bowl against Alabama and the Fiesta Bowl against Penn State — that had coach Chris Petersen bereft of solutions after the 28-23 defeat (box) in UW’s first Rose Bowl since 2001.

“I have no idea why,” he said of the crippling slow starts. “We’re close to being where we want to be, but we’re not there.

“You’re playing the best of the best (including Alabama and Penn State). You carry out a plan and have to play your best.”

Petersen volunteered that responsibility rested with him, although first-year offensive coordinator Bush Hamdan can take a big helping of responsibility.

“It’s on me, not these kids,” he said. “We didn’t play with that edge, that chip we normally play with. Across the whole squad. Very frustrating, the way we started the first half.”

After playing big games in Atlanta and Phoenix the previous seasons, the stage should not have been too big, although it was the certainly the most splendid tableau, as the Granddad would have it.

As it has done for a century, the Rose Bowl offered an uncannily perfect New Year’s Day extravaganza of sun, mountains, music and pageantry for the party house of 91,853 that came from around the nation to be part of the scene.

But the Huskies offense couldn’t get with it.

The tell-tale moment was not in the late-game frenzy when the Huskies scored two touchdowns in the final seven minutes.  It came in the final minute of the first half.

The defense, missing All-America safety Taylor Rapp with an injured hip, had been valiant in holding the nation’s second-highest-scoring offense to 14 points while the UW offense managed three.

The Huskies took possession at their own 8-yard line with 1:21 left, and made the mistake of thinking they could get into scoring position.  They completed one short pass followed by two incompletions off play-action. They punted the ball back to Ohio State at its 43-yard line with a minute left.

Behind QB Dwayne Haskins, who finished third in the Heisman Trophy voting, the Buckeyes covered 57 yards in five plays, the last being a one-yard touchdown pass to Rashod Berry. Instead of being a manageable 14-3 halftime deficit, it was 21-3, which was not the place to be against a team the caliber of Ohio State.

“That was a big, huge, huge part of the game,” Petersen said. “It was frustrating on both sides (of the ball) — we didn’t convert on offense, and then (OSU) comes down and scores.”

To start the second half, the playcalling was startlingly different — six consecutive runs by workhorse RB Myles Gaskin, which took the Huskies to the OSU 32. They weren’t run-pass option plays; they were a kick-ass, straight ahead power style that Ohio State couldn’t handle.

But on the first pass attempt of the half, Browning was sacked for a seven-yard loss. Then Gaskin was nailed for a four-yard loss. Instead of a potentially game-changing scoring drive, UW punted.

“We had more runs called in the first half, but they were run-pass options, and Jake was throwing a lot,” Petersen said. To start the half with a straight-ahead attack, “they felt they could do something. It helped us stay on the field and not go three and out.”

The persistence paid off in 20-fourth quarter points, throwing a panic into thousands of Buckeyes fans who showed up in large numbers in large part to celebrate retiring Urban Meyer in his final game in seven highly successful, albeit controversial, seasons.

But the Huskies made another curious decision that caused OSU relief. Facing a fourth-and-eight at their own 17 with four minutes remaining, the Huskies punted away what might have been their last shot.

“We were going to go for it, but then if we didn’t convert, we’d put the defense in such a bad situation,” said Petersen, who then admitted they had  hoped OSU would line up its punt return team in a formation the UW coaches felt would be vulnerable to a fake punt.

“We had a little thing going on there,” he said. “But their return team lined up not how we wanted them to.We didn’t get the look we wanted.”

While the Huskies defense did hold Ohio State on its next possession, and subsequently produced a splendid 71-yard scoring drive in 10 plays in just two minutes, only 42 seconds were left. Ohio State ran out the clock.

For Washington (10-4), the clock began ticking on changes needed to take the program to the final frontier.

“Ohio State is as good as anybody out there,” Petersen said. “They could have been in the (CFP) tournament. A lot of people think that. It’d frustrating for us to not put our best foot forward for four quarters. It comes back to us coaches to figure that out. I think we need to look at our offense really hard. The game was kinda similar to what went on during the season. We had red zone issues. We can drive the ball, run the ball pretty well on occasion. In the red zone, it’s a penalty or sack. So frustrating.

“We’ll have a plan. Study the hell out of the tape. Tear it down and be more precise. We’ll figure it out.”

Unfortunately, it didn’t happen before the sun set on the San Gabriel mountains. At least something looked good in purple. 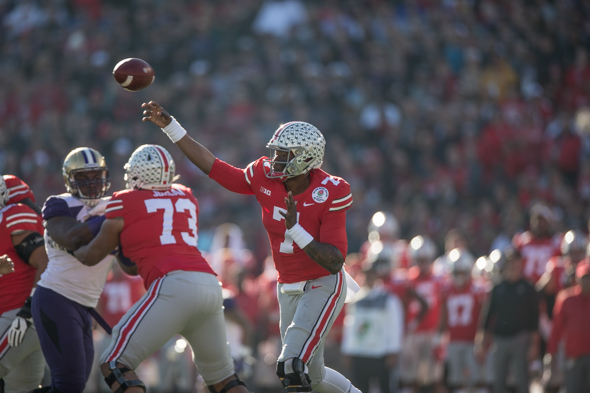