Thiel: Cowboys’ Garrett has some winning to do

Seahawks’ Carroll and Cowboys’ Garrett began their NFL jobs in the same year. Carroll has nine playoff wins, Garrett one. Who needs this game more? 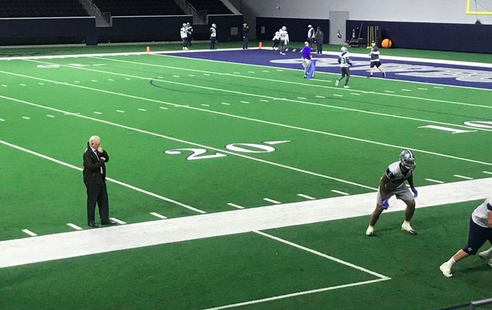 After the final weekend of the season, eight NFL teams had head coaching vacancies. They included guys long in the job (Marvin Lewis, Bengals, 16 seasons; Mike McCarthy, Packers, 13) and a short-timer (Steve Wilks, Cardinals, one).

The ousters of McCarthy and Lewis advanced Pete Carroll’s nine seasons in Seattle to No. 5 on the list of longest-tenured current coaches. He trails Bill Belichick (19), Sean Payton (12), Mike Tomlin (11) and John Harbaugh (10).

More remarkable is No. 6, Jason Garrett of the Dallas Cowboys, who host the Seahawks at 5:15 p.m. Saturday (FOX) in a wild-card playoff game.

What’s remarkable about it is that since Garrett was hired by owner Jerry Jones Nov. 18, 2010 (11 months after Carroll) as interim head coach, then promoted in 2011 to the permanent job, the Cowboys have won one playoff game.

Despite merely mild success coaching America’s Team, one of the most pressurized jobs in American sports, under an owner who is an industrial-strength nuisance, Garrett survives despite having won as many playoff games as former NFL coaches Mike Tice, Jim L. Mora, Rich Kotite, Ray Rhodes and Potsy Clark (Giants, 1935).

The guess here is Garrett has no compromising of Jones — if he did, it wouldn’t work because Jones has no shame — but he likely has an urgency about Saturday’s game that surpasses anything coming his way from Seattle.

Both teams are 10-6, but the Seahawks are thrilled with the unexpected success. In Dallas, fans recollect when 10-6 was a mandatory minimum.

The Seahawks, in a similar span under Carroll, have nine wins in 14 postseason games. In the regular season between the clubs since the pair took over in in Seattle and Dallas, Carroll holds a 4-2 lead. In the past three meetings against Seattle, Cowboys have lost all, largely because they have scored 12, 12 and 13 points.

The dominance doesn’t mean Garrett is a stiff — believe it or not, his 32-16 regular-season record in the past three years is the NFC’s best — but it goes a long way to explaining why Kris Richard is Dallas’s defensive backs coach.

Richard was part of the Seahawks staff from 2011-17, twice promoted and given large credit for work with the gentlemen who became the Legion of Boom. His falling out with Carroll was not made clear, but Garrett sounded happy Seattle’s defensive coordinator had become available.

“Kris has done a fantastic job for us,” Garrett said this week in a teleconference with Seattle media. “We felt like, when we hired him, that so much of what he believes in is what we believe in. The DNA of our defense is aligned with the values that Kris has.

“I think it’s helped our entire defense and certainly the back seven of our defense. He’s just a really smart guy. He’s very passionate about football, he’s a fantastic teacher, a great communicator, he’s able to inspire guys and get them to play.”

Richard’s single season with the Cowboys has helped put his name in the large candidate pool to fill the eight vacancies, notably for Miami. For this week, Richard will be a help in diagnosing Russell Wilson’s passing.

Richard’s knowledge didn’t help all that much Sept. 23 in Seattle’s home opener, when the Seahawks beat the Cowboys 24-13. Wilson was 16 of 26 for 192 yards, two touchdowns and no interceptions. And that was without injured WR Doug Baldwin.

Naturally, Wilson had nothing but props for a former Seattle coach.

“He was always great, in terms of how he coaches, and his discipline,” he said. “I always really enjoyed being around him. I think he’s doing the same thing in Dallas. He coaches up the players really well — you can tell that on their defense.”

If urgency to win is any kind of barometer, Garrett and Richard have an edge. Richard is eager to end his old team’s season, and Garrett’s only playoff pelt came in 2014, when they won a wild-card game at home 24-20 against a mediocre Detroit team.

Given the high casualty rate among NFL coaches, it’s surprising that Garrett has endured so long under the glare of an impetuous boss, sheltered only by a single playoff win. And he has to have begun thinking of Carroll as a nemesis.

If the Seahawks jack up the Cowboys again, Jones might be inspired to create a ninth head coaching vacancy. After all, he once said, “I have never had a problem dealing in areas of ambiguity. I can make a decision and not have it all lined up just right.”

Any questions how the Cowboys have maintained the one-playoff-win-per-decade pace?