The Seahawks played with a diminished Shaquill Griffin, and waited too long to move to the passing game. The season-ending loss was mostly on the coaches. 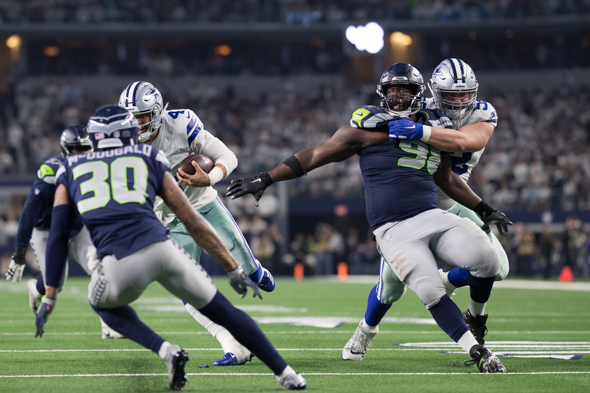 DALLAS — If there were a Hall of Sporting Justice — a truly bad idea, actually, taking away the fans’ fun of hating the foe and demanding the heads of coaches, players and referees, in favor of the rule of honesty — it would declare unanimously that the better team won Saturday’s little tilt here in Texas.  No appeals possible.

Two pieces of evidence were overwhelming. The Dallas Cowboys denied the Seattle Seahawks what the Seahawks do best, and they picked on the weak. That’s winning NFL football in January.

Those are the primary reasons the Seahawks season is over at 10-7 after the 24-22 loss (box) in the Cavern of Conspicuous Consumption that is sometimes called AT&T Stadium.

The strangest development from those two pieces of evidence was inability of the Seahawks coaches to counter.

When it became apparent that the run game was going nowhere — leading rusher RB Chris Carson was held to 20 yards in 13 carries, and the Seahawks overall had 74 on 23, half the season average — the Seahawks didn’t shift to QB Russell Wilson’s arms and legs the pass until it was too late.

“Yeah, we would have like to,” coach Pete Carroll said. “The protection was good on (play-action) passes. He threw some strikes and . . . yeah.

“It just didn’t come out the way we planned.”

The why of the statement will occupy the off-season now upon them.

The Seahawks took considerable pride this season in developing sufficient weapons when defenses loaded up to stop the run. But they seemed to have few answers when the Cowboys’ front seven used movement and quickness — aided by injuries that hampered LG J.R. Sweezy and RG D.J. Fluker — to deny the run.

“They had a lot of movement,” said LT Duane Brown. “They don’t have a lot of very big guys up front, so they moved a lot to make up for the lack of size. They were very effective, playing quick with a lot of leverage. The linebackers did a good job filling the gaps.

“We got to communicate better on who to pick up, who to double-team. The times we got it done, we were efficient.”

Speaking of efficiency, that’s what Wilson has been all season with WR Tyler Lockett — the best in the NFL, according to the QB rating when Lockett is targeted. He proved it again Saturday, catching four passes for a whopping 120 yards. But the NFL’s only receiver without a drop this season was targeted only six times.

“He might be the best of the receivers that’s come through here,” said WR Doug Baldwin of his teammate. “He is arguably the most efficient receiver in the NFL. I think him and Russ had a perfect QBR rating. That’s a lot to say about a receiver who gets only so many targets.

“It’s a beautiful thing to watch.”

So why were the 94,327 on hand allowed to see such beauty, even if they may describe it otherwise?

If the Seahawks had deployed Lockett as the Cowboys did WR Amari Cooper — he had nine targets and seven receptions for 104 yards — the outcome may have been different. But the Cowboys and a more diabolical incentive.

He was not weak in the sense of strength, character or will, only in health.

He sprained an ankle against Arizona in the regular season finale Sunday. He tried to power through, but was obviously diminished in defending the pass as well as the run. He had a key pass interference call, an illegal-contact foul, a critical whiff on a run by RB Ezekiel Elliott (137 yards on 26 attempts), and was part of a busted coverage in the fourth quarter that allowed a 34-yard catch and run by Cooper, the Cowboys’ only explosive pass play of the game.

Asked how difficult it was to play on the ankle, he said simply, “Very.”

He paused, and elaborated.

“I was willing to give whatever it takes for this team,” he said. “I told the trainers and the team I was going to give out. That’s how much I care about this team.

“It’s something I wasn’t trying to think about. Just play the game.”

He was well aware of the game-long targeting.

“Definitely, definitely,” he said. “That happens in football. They gotta attack somebody. I  tried to make as many plays as I could. I definitely worked my butt off the whole game.”

But was he better than healthy backup Akeem King, who played well the previous week? We’ll never know.

“They played together solidly as a unit,” Baldwin said of the Dallas defense.”There weren’t a lot of holes in their front seven. We thought we had some opportunities in the secondary, but their front seven caused some problems for us.”

The upshot was that the Cowboys completed a nine-play, 67-yard scoring drive early in the fourth quarter to retake the lead 17-14, and after an exchange of punts, took 11 plays to move 63 yards for the decisive score with 2:14 left in the game. The Seahawks had a late score for a brief scare, but failed on an onside kick.

The Cowboys’ conclusion was exactly how the Seahawks win games — stout second-half defense, and a balanced, ball-control offense in the fourth quarter, led a good quarterback, Dak Prescott, to choke off a rattled foe. The Cowboys were aided in the final drive by pass interference penalties on LB K.J. Wright and CB Justin Coleman, part of a slew of mistakes that kept Seattle off-balance.

The tell-tale stat: Two of 13 on third-down conversions.

Much of the post-game talked centered on the surprising success of the season, including key contributions from new and often younger players, and how enjoyable the relationships were. All of that big-picture talk was worthy, but did nothing to repair the hole Saturday night.

It was not an embarrassing loss — hell, the Seahawks have only three road playoff wins in their history; this was the 12th loss — because the Cowboys were better.

“The game didn’t go as we anticipated,” Carroll said. “Our games have been different than this one.

Plain and simple, Cowboys coach Jason Garrett and his staff learned from the 24-13 loss in Seattle in September and out-coached their Seattle rivals at their own game. 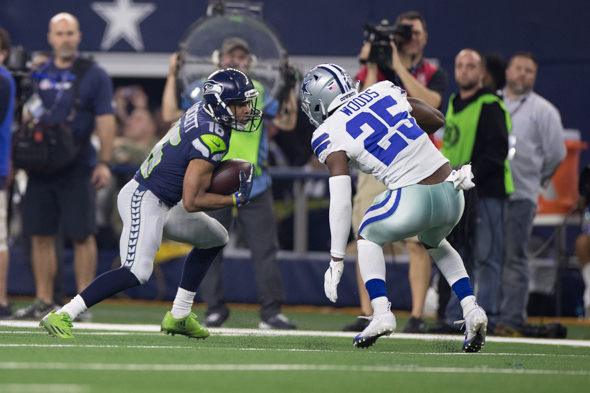