Controversy has attended much of Gary Bettman’s term as NHL commissioner. In town to informally christen the latest NHL expansion franchise, he was not booed. 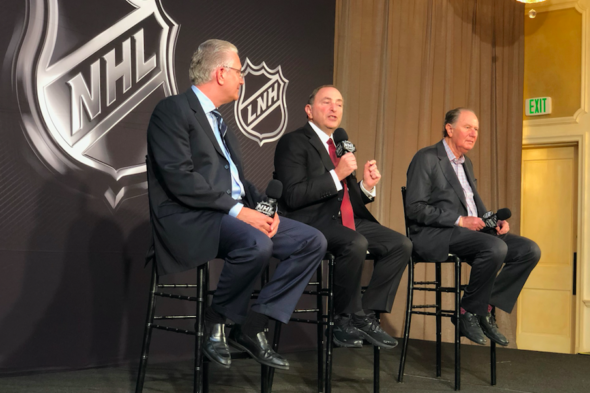 For those getting acquainted with the National Hockey League, what Gary Bettman did Wednesday in Seattle was cheerlead for the enterprise’s newest franchise, the Glacier Clams (the two slowest, familiar indigenous objects in the Northwest; hey it’s taken more than a century for big-time hockey to get back here, so I’m going with the nickname).

The NHL commissioner was good at his task.

“This is a big deal,” he said at a press conference at the Space Needle’s restaurant. “Between the team and the arena, the investment is approaching a billion and a half dollars. Everything was tracking exactly as we hoped it would. Everything is going to turn out spectacularly.

“When you check those boxes, it made it a really easy decision.”

As you can tell, Bettman is all in on Seattle.  He knows the joint, and his league.

Feb. 1 will mark his 26th year as commissioner, a remarkable feat considering the volatility inherent in shepherding North America’s fourth-largest pro sports enterprise. For most hockey fans, he can never do enough, except when he does too much.

He inaugurated expansion franchises in Nashville (1998), Atlanta (1999), Minnesota (2000) and Columbus (2000), much to the dismay of traditionalists in Canada, where the sport, along with winter, was birthed. Too much in too too many weird places in America, critics said.

So he waited 15 years before expanding to Las Vegas, which promptly went to the Stanley Cup finals its first year. Hell, Gary, what were you waiting for?

He relocated four franchises, and also took the NHL through three lockouts. He was the most hated man in Canada and the puckish parts of the U.S. Yet the NHL’s average annual salary is $3.2 million, and every playoff game is televised in the U.S., and he still gets booed every time when presenting Lord Stanley’s hardware on the ice to the annual winner.

But in Seattle, little is known of the many Bettman controversies and triumphs. It is neutral ground. Well, sort of.

He was a top executive of the NBA from 1981, rising to the N0. 3 spot, until he left to join the NHL in 1993. That was 15 years before the prairie pirates were allow to abscond with the Sonics to Oklahoma City. Bettman can claim clean hands, except he was a disciple of NBA commissioner David Stern, the Thanos who directed the destruction of the Seattle pro hoops world.

Yet if it weren’t for Stern’s decision, Bettman wouldn’t have been in Seattle Wednesday, gee-whizzing the wonders. Had the Sonics survived in a more modest upgrade of KeyArena — always too small for the NHL rink —  there would have been no room for his enterprise.

But 10 years later, the NHL’s arrival in 2021 likely will be seen as a pinnacle point in the transformation of Seattle into a global icon of technology, wealth and all related joys and travails.

For those of us who have borne witness to what has happened to South Lake Union, and the entire Western Washington real estate marketplace, since 2008, the transformation is staggering. Up to and especially including the more than $800 million investment in private funds to fix up a public building on public grounds, a project whose degree of difficulty may be unprecedented among U.S. sports venues.

So I was curious whether Stern, his friend and former mentor who retired from the NBA in 2014, described his Seattle experience to Bettman.

“I don’t know that we’ve ever discussed it,” he said, arching some gray eyebrows in the crowd. “In my prior life, I came to Seattle numerous times. I’m not an expert on what transpired (in 2008), and I don’t see any reason to go there.

“We’re thrilled to be coming here. We think Seattle’s great. Whatever happened in prior sports, with prior teams, as far as I’m concerned, is water under a bridge. It’s not anything I focus on, I’m just concerned about us.”

The suggestion of a potential sharing of the building with the NBA, which has no current plans to expand, and likely wouldn’t change its mind until after 2025 at the earliest, was dismissed haughtily by Bettman.

“This arena is being built, or so I’m told, to handle an NBA team — if the NBA chooses to come back,” he said. “It’s something I don’t concern myself with, because this building will be ready to house our NHL team and we’re excited about that.

“Whether the NBA chooses to come back isn’t something I’m focused on.”

That is the plain deal. The NHL has coveted the Seattle marketplace since even before Bettman’s tenure, and Seattle has been without top-tier hockey since the folding of the Stanley Cup-winning Metropolitans just after the War to End All Wars.

Timing, we have been told, is everything in life. The NBA has timed out. The Glacier Clams have won the race.