The Seahawks signed free agent kicker Sam Ficken, 26, as a candidate to replace Sebastian Janikowski, who limped off the field Saturday with a hamstring injury. 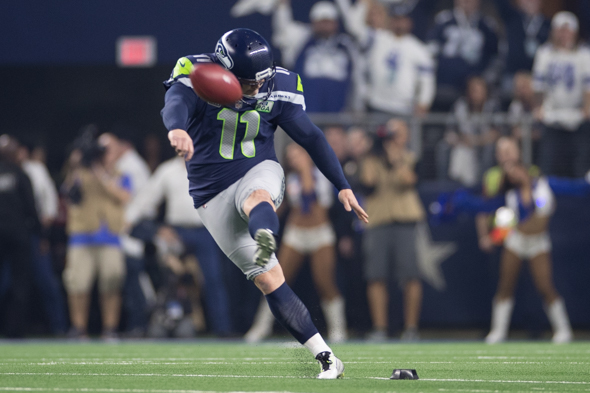 Limping off the AT&T Stadium field with a serious injury Saturday was likely the last glimpse the Seahawks will have of their one-season placekicker, 40-year-old Sebastian Janikowski. The club Friday signed free agent kicker Sam Ficken, 26, most recently with Rams, to start a competition for the 2019 roster spot.

Seattle will be Ficken’s fourth team since signing with the Jaguars in 2016 as an undrafted free agent out of Penn State. In his four-game career with the Rams as an injury replacement for Greg Zeuerlein, Ficken made three of six field goals and 14 of 15 PATs. One of his misses was a 28-yarder in the game prior to the Seahawks-Rams first meeting Oct. 7. The miss got him fired, which made him eligible to sign a futures contract for the Seahawks’ 90-man roster.

Janikowski’s age and serious hamstring strain make it highly unlikely he will return to Seattle, which signed him to a $2 million free agent deal to replace Blair Walsh.

“I don’t know that yet,” Carroll said Monday when asked if Janikowski needed surgery. “I haven’t heard back on that yet. It was significant. He thought not. He didn’t think that he did something out of the ordinary than a hamstring pull, but that was certainly significant.”

Janikowski made 22 of 27 field goals and 48 of 51 extra points. But besides the miss on a 57-yarder in the playoff game in Dallas, he was injured two weeks earlier when he was roughed on a field goal attempt against Kansas City and hurt his back.

Dec. 16 against San Francisco, he was the last man back on a kickoff return by Richie James Jr. Janikowski made no effort to tackle him, and James scored a touchdown. The kickoff was right after he missed a PAT.

Special teams are an off-season priority for the Seahawks after numerous mistakes in 2018.

“We had some ups and downs,” Carroll said. “We had a great stretch in the middle that we were really on it. I thought that we showed some vulnerabilities late in the year on returns.”