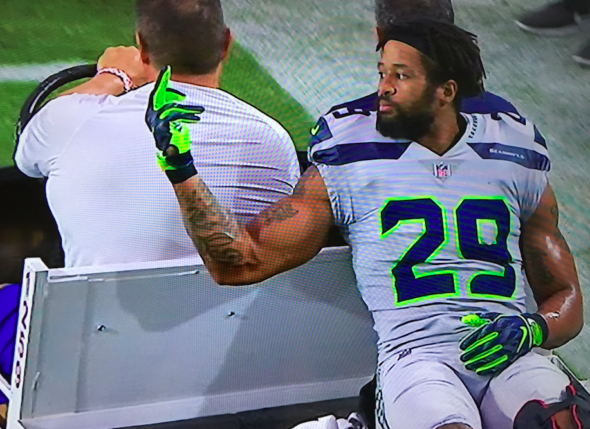 Earl Thomas offers his thoughts to the Seahawks bench Sept. 30 after his leg was broken during  his contract year.

Cliff Avril was in an exhibition game during his rookie season with the Detroit Lions when he realized he didn’t know his responsibility for the play just called. Before lining up, he quickly asked a veteran defensive-line teammate for help. Instead of helping, the teammate told him to do the opposite of the call.

The defense was blown up for a big gain. Coaches were yelling at Avril. He confronted his teammate about the deliberate sabotage.

Avril shared his welcome-to-the-NFL moment with the audience as guest speaker for the recent Morris Trophy presentation at the Washington Athletic Club honoring the top linemen in the Pac-12 Conference.

The retired Seahawks star’s anecdote came to mind after reading an illuminating story by the Associated Press, which researched player-career spans.

Despite union efforts to stop the withering of the middle class of NFL players, since 2005 the average amount of playing experience for athletes on opening-day rosters shrunk from 4.6 years to 4.3.

The basic truth of each club’s need to get younger and cheaper every year in an industry with a hard salary cap has been generally understood for a long while.

But the fresh data underscores the point that the union’s efforts in collective bargaining in 2006 and 2011 to preserve and lengthen existing members’ jobs hasn’t worked. That means when the current bargaining agreement expires after 2020, slowing the decay is likely to be a large, difficult argument.

Meantime, as illustrated by Avril, it also says that all the happy-talk camaraderie about team unity the NFL loves to propagate in order to sell jerseys and trinkets is often a veneer. Beyond a handful of stars secure in their places, there’s little benefit to a young veteran in helping out the up-and-comer.

The ruthless truth is that in an already brutal sport, the physical player vs. player competition for roster spots — a concept central to Pete Carroll’s coaching — is secondary to labor costs and age.

The decline in job longevity means that, with the notable exception of the quarterback position, the more a player survives and succeeds, the less likely he is to continue to survive and succeed.

The concept helps explain one of the most vivid scenes of the 2018 Seahawks season that ran contrary to all the yippee-skippee regarding the surprising 10-6 record good enough to make the playoffs. And it helps explain how the Legion of Boom came apart so quickly.

As longtime Seahawks hero FS Earl Thomas was carted off the field Sept. 30 in Glendale, AZ., with a leg broken in the 20-17 win over the Cardinals, he offered a middle-finger condemnation in the direction of the Seahawks bench. For all intents and purposes, it was the final field memory many fans will have of one of the greatest players in club history.

As you may recall, Thomas, 29, held out of training camp and preseason in hopes of getting an extension heading into his contract year, in which he was to earn $8.5 million. The Seahawks said no. Thomas didn’t want to miss game checks, so he returned reluctantly to play the regular season, making his holdout look foolish.

Then the worst-case scenario for Thomas came to pass: A season-ending injury ahead of free agency. Having broken a leg before, Thomas knew immediately what had gone down, and wanted to make sure coach Pete Carroll and the TV audience knew his feelings on the matter.

He also likely gestured on behalf of CB Richard Sherman, injured the previous year in a similar business circumstance, and similarly contemptuous of management decisions.

The Seahawks’ refusal to extend Thomas and Sherman was a near-direct result of extending SS Kam Chancellor, the third member of the Legion. The Seahawks took a risk in August 2017 in giving Chancellor, then 29, the increasingly rare third contract.
It blew up on them.

His charge against the Seahawks’ salary cap in 2018 was nearly $10 million. Imagine how  that money might have been spent better on active personnel that could have helped a team that didn’t lose a game by more than eight points, including a two-point loss in the playoffs.

A similar problem is upon the Seahawks this off-season with LB K.J. Wright. He’s also 29 and wanting a third contract with the Seahawks, who again have said no. In 2018, he played only five games due to injuries, and made $8.2 million. So he’s going to enter free agency in March. If he gets no offers, he could come back to the Seahawks on a cheaper, one-year deal.

Wright is a typical member of the shrinking middle class that the AP analysis describes — a successful eight-year vet who has become priced out and aged out before he’s 30. Even if he were fully healthy in 2018, it’s likely the Seahawks wouldn’t have offered an extension.

All teams face similar business problems. Perhaps the worst scenario this season played out in Pittsburgh, when premier RB Le’Veon Bell sat out the entire season in futile pursuit of an extension, and coupled with star WR Antonio Brown’s pouts, created a toxicity that contributed to the Steelers losing four of their final six games and missing the playoffs.

The scary part for the Seahawks is that the problem of the shrinking middle class is likely to get worse, because the two players most deserving of third contracts, QB Russell Wilson and LB Bobby Wagner, enter their contract years in 2019.

If somehow Wilson and Wagner struck multi-year contract extensions (no franchise tags), their deals likely would suck up a big chunk of the $60 million in cap space the Seahawks have for 2019. GM John Schneider would try to spread out the financial damage of guaranteed money, but there’s limited work-arounds when a team has the two of the best at their positions in their primes.

Unless, of course, Wilson, Wagner and Carroll don’t mind running around every weekend with 40 or so kidlets. But good kidlets are harder to come by with only four draft picks.

At least Wilson and Wagner can be counted on to help everyone learn their jobs.