His “stewardship” of Sonics tells all that anyone needs to know about what kind of political leader Howard Schultz would make. So does his lousy apology. 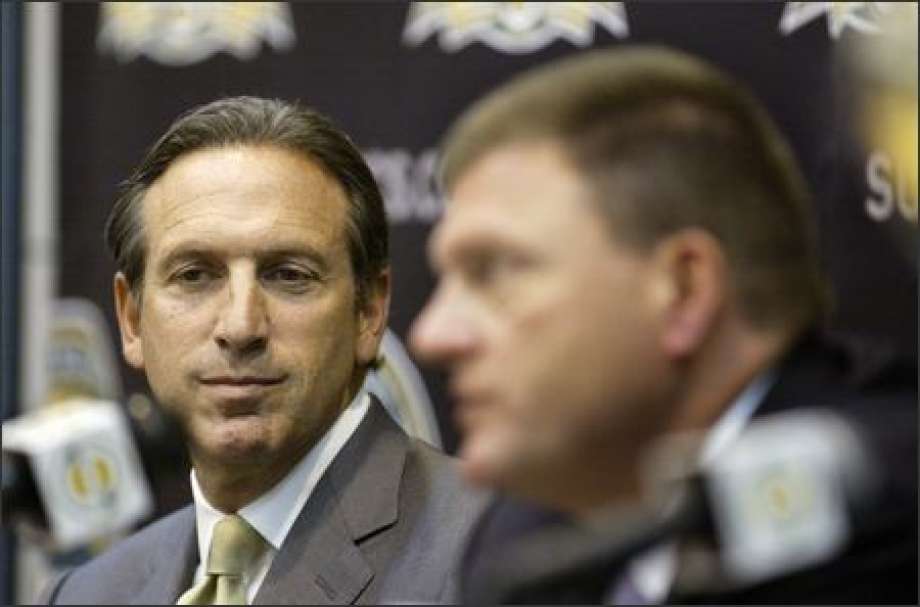 Howard Schultz on the day he sold the Sonics to Clay Bennett. / Getty Images

On the July day in 2006 that principal owner Howard Schultz announced he was selling the Sonics to out-of-town buyers, he did something petty that turned out to have significant symbolism.

The press conference at the Sonics practice facility was decorated with balloons in team colors. Whether he ordered it, or was done by a misguided young staffer, I don’t know. But he didn’t tell anyone to remove them as he introduced buyer Clay Bennett.

Everyone in the room believed, or suspected, Bennett was going to move the team to his Oklahoma City hometown as soon as he could, mostly because Schultz earlier claimed local government showed his ownership group “no respect” in his demand for public funds to upgrade KeyArena. Took Bennett just two years.

The announcement called for a eulogy, not for balloons. Since then, whenever the tone-deaf Schultz makes news as a business/civic leader or now, as a potential independent candidate for the U.S. presidency in 2020, I think of those balloons.

They were full of hot air.

My observation has nothing to do with his liberal/conservative political agenda, or some festering wound about the Sonics departure. And Starbucks under his watch has advanced  some worthy labor initiatives regarding employee health care, education, and employee stock ownership, so some credit is due in his day job.

Nor is it about the political question of whether he should run as an independent, and the potential consequence of splitting the anti-Trump vote.

Hey, it’s a democracy. So far. He’s entitled to run.

What’s this about? I simply don’t believe anything he says.

His ownership of the Sonics from 2001 to 2006 revealed that he was untrustworthy. Worse, he may not even know it. (Wait — is that worse?).

No further examples need to be dredged from 13 years ago. He offered up one Sunday.

The Seattle Times allowed him to publish an op-ed column, to coincide with his recorded appearance on a fawning 60 Minutes segment, all in support of his new book, From the Ground UP. The Seattle tour stop is Thursday at the sold-out Moore Theatre.

Schultz opened his essay with a transparent suck-up to local readership: “I first fell in love with Seattle . . .” Bleah.

Then for the first time publicly since he abdicated what he often called his “stewardship of a civic trust,” he tried to take responsibility for being a betrayer and a sellout.

He wrote of the Sonics sale, “My biggest mistake still reverberates in the city.”

No, Howard. It was not a mistake. A mistake is when you add two and two and get five.

You knew exactly what you wanted to do, and obtained what you wanted — a profit for you and your investors and relief from fighting city, county and state electeds who kept trying to tell you that the world had changed from the 1990s.

That’s when the owners of the Sonics, Mariners and Seahawks all received tax subsidies for new venues during a period when the federal government was running annual budget surpluses and municipal budgets grew thanks in part to new tax revenues from the robust tech community led by Microsoft.

But for a variety of reasons, by the early Aughts, there was neither money nor political will for another round of KeyArena upgrades after having spent $100 million in tax money to do so in 1995.

So, in the manner of a spoiled brat, Schultz cut and ran.

In the op-ed, here’s how Schultz rationalized it:

The loss of the beloved Sonics devastated thousands of fans. Many rightfully blame me.

In a new book I try to shed light about what went into my decision to sell when we did and the lessons I came away with. The truth is that I wish I held on to the team until someone local wanted to buy it. But after five years as an owner, I was so focused on getting myself and others out of a money-losing situation that I made a bad choice and failed to follow a principle that helped me grow Starbucks, which is to try to balance profit with humanity.

Selling the Sonics is the biggest regret of my professional life. Few things are more human than the bond felt among family, friends and in communities when cheering on a hometown team. Sitting at Yankees’ games in the right-field bleachers with my dad was among the few happy moments we shared when I was a kid. Selling the Sonics ultimately denied that bond to thousands of people in Seattle. I do not expect my actions to be forgiven or forgotten. I created a wound I cannot heal, and for which I will always be deeply sorry.”

If you want to convey contrition that might be meaningful, here’s my offer of a starter kit:

As a pro sports owner, I was in over my head. I didn’t know or like how the business worked, didn’t like that fans cared more about the players than about me — ugh, Gary Payton, glad I traded him! — and learned that most of my business and people skills were worthless in pro sports. I panicked.

I found a mark who was hand-picked by Commissioner David Stern, and played Clay Bennett off against a phantom bidder in Larry Ellison. When Bennett offered $350 million for a business losing $20 million a year, I didn’t care about all that “stewardship” twaddle. Whatever pain the fans felt was nothing compared to my suffering in owning it.

In hindsight, I was greedy, reckless, selfish and foolish. If you can accept that I now recognize how destructive are hubris, disingenuousness and ignorance, especially for an elected leader, I ask for your forgiveness. If yes, then I seek your time to talk about health care, tax reform and cybersecurity.”

Until he can find words similar that convey genuine candor and authenticity, many of us who saw the real Howard Schultz as a pro sports owner will never see him as as he sees himself — the brilliant coffee baron with an enlightened perspective on 21st century America and the world.

He will be the balloon guy. A phony.