As Huskies reel in another supposedly top class, more NCAA recruiting excesses come to light: Tennessee offered 440 scholarships in order to get 25 players. 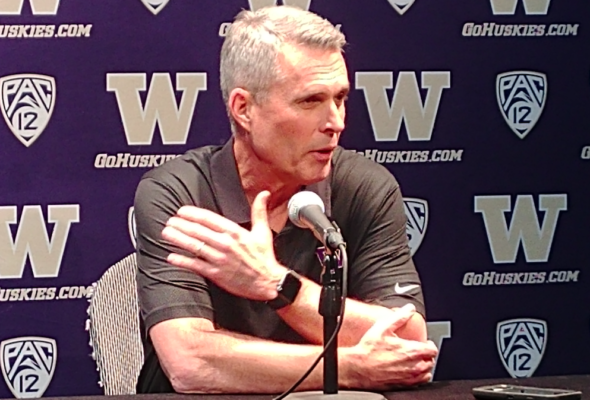 College football recruiting for most schools and fans is like ordering from a menu written in Chinese. Pictures are helpful, and previous experiences of random selections generally turned out all right, even if it was never clear what was being eaten.

For many recruits, however, the analogy is the chef from Seinfeld. For reasons often not clear, they are surprised with a harsh denial: “No soup for you!” More on this later.

Along with the rest of the national industry on letter of intent day Wednesday, the Washington Huskies rolled out a list of 22 newcomers in the class of 2019 (bios of signees here). While the various high school recruiting sites claim that the UW has another top-20 class, coach Chris Petersen shrugged.

“You don’t really know how it’s going to go with these kids,” he said. He was blowing smoke, but the faux candor was more credible than the recruiting hype machines that purport to understand the destinies of 17-year-old boys.

“I know nobody’s going to get up on signing day and say, ‘Yeah, we feel bad about this class,'” he said. There did seem to be genuine purple elation about a pair of defenders from California that were locked up in the final 24 hours: ILB Daniel Heimuli (6-0, 215) from Palo Alto and S Asa Turner (6-2, 199) from Carlsbad.

“We’re really, really excited (about them),” he said. “We’ve been recruiting those guys for a long time. To finally get them signed and coming here, it’s an exciting time. Those guys will make us better.

“Daniel was one of those guys that we really liked a ton as a junior. We thought he was one of the better players, with a really big upside. His senior year you could kind of see him each game just getting better.

“Asa’s a big, athletic, rangy guy that’s what we kind of like back there — he can come down and tackle in space. The secondary is certainly an area of need with the guys that we graduated. I feel really good about him.”

But enough about the schools and players who made football matrimony. Sports Illustrated has an intriguing story this week about the broken relationships: Recruiting’s Bait and Switch: The Uncommitable Scholarship Offer.

Analyzing the national database of the recruiting cabal’s largest operator, 247Sports, over the past eight recruiting cycles, SI discovered large annual increases in the number of uncommitted scholarships offered, and subsequently withdrawn. Over the period, among major conferences:

The intricate dance has been part of big-time college recruiting for decades: By NCAA rule, schools can unofficially offer and withdraw scholarships, and recruits can unofficially rescind their oral commitments to chase other offers. Nothing is official between the parties until days like Wednesday’s national LOI day. 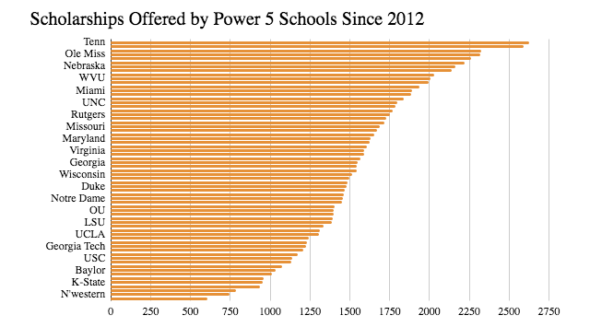 The schools who lead the NCAA in paper passing. / SI.com

The basic unfairness is that coaching staffs know how to bait and switch far better than recruits and their families know how to respond. The classic case is the recruit who commits early to the school of his dreams, only to be dumped late by the school, which gives the scholarship to what it thinks is a better player. The recruit loses out on the chance to find a better opportunity.

It’s a bad deal that’s getting worse, according to SI. Schools now are flinging offers like confetti.

Tennessee of the Southeastern Conference is the most profligate abuser. They had more than 440 offers out this year, and averaged 328 over the eight years that were examined, for classes that are rarely allowed to exceed 25 a year.

“It’s definitely something that’s gotten worse,” 247Sports scouting director Barton Simmons told SI. “This devalues the offer. Some programs fight to keep the value of their offer up. Other programs maybe don’t see the point of fighting it, and they play the game.”

At Washington, Petersen thinks he has taken a higher road — if such a thing exists in college sports. Asked how many offers UW had out for this class, he said didn’t know precisely Wednesday, but Thursday reported a figure of 90. (Note: In an earlier version of the column, Petersen estimated between 120 and 130).

“I think the last two or three years we’ve been in the bottom three schools in the Power 5 conferences in the least amount (of offers),” he said. “We kinda take pride in that. It keeps us focused.”

Still, that’s about 100 recruits UW sought and didn’t get. Whether the decisions were the choices of player or school is known only to the coaches, and a lot of UW’s misses landed with other top-tier programs. It’s the lower-rated recruits who are are more vulnerable.

Petersen sort of dodged a question of whether the current bait-and-switch system was unfair to the recruit.

“I wish the whole recruiting process would slow down,” he said. “But everything is going the opposite way, faster and faster. A lot of our coaches are looking at younger (recruits). Offers are coming out earlier than they ever have to younger guys. The whole thing keeps getting accelerated.

“I don’t think it’s better for the overall picture, for the kids and the whole process. A lot of coaches would agree with that. But it is what it is. You gotta play the game.”

The game, it seems, remains heavily in favor of the schools, most of whom, in the name of winning, seem oblivious to the cheapening of the product and mission, and are hardened to the loss of soup for recruits.

Anyone advocating change needs to be reminded that there are few American institutions more reform-resistant than the NCAA.