Washington State goes to the grad-transfer well again for Eastern Washington’s star QB. And Gage Gubrud won’t be afraid of the snow. 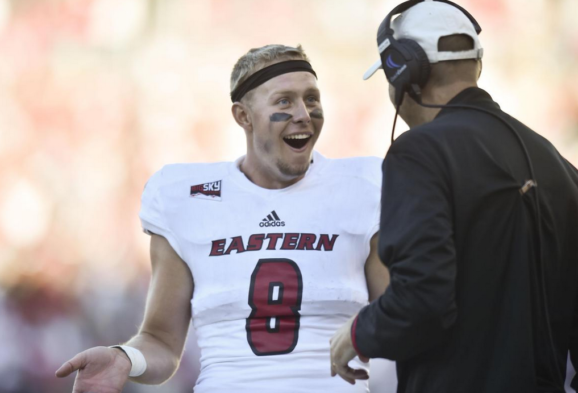 After starring at Eastern Washington, QB Gage Gubrud will play a season for the Cougars. / Spokesman-Review

If you thought the 2018 Apple Cup was enhanced because the teams were good and the outcome was nationally relevant — and hugely entertaining because of snow —  you might want get on your giddy early for the 2019 chapter.

Former Eastern Washington University star QB Gage Gubrud won his NCAA appeal Saturday for an additional year of eligibility and will spend his final season as a graduate transfer at Washington State.

Not only is the Apple Cup anticipated to feature Gubrud vs. Jacob Eason, the Washington Huskies’ much-heralded transfer star from Georgia who sat out last season, it will be played in the snow at Husky Stadium.

We know that because so much snow is on the ground around Puget Sound now, with much more coming, that it can’t possibly melt by the game date of Nov. 29.

What a time for climate change to take a one-year sabbatical.

A two-time finalist for the Walter Payton Award as the best offensive player in FCS, Gubrud may be a better acquisition than Gardner Minshew, who finished fifth in the Heisman Trophy voting after leading the FBS in pass completions (433), pass attempts (613), passing yards per game (367.6), and was second in passing yards (4,477).

In his senior season, Gubrud (6-2, 205) injured a toe in Eastern’s fifth game and sat out the rest of the season. Eric Barriere was inserted and took the Eagles into the playoffs and reached the national championship game, where they lost to North Dakota State, 38-24.

The extension of the season was important for Gubrud, who began as a walk-on from McMinnville, OR., because it qualified him for another year under the NCAA’s medical redshirt rule. It says a player must play no more than one-third of the team’s games. Eastern played 15 games, winning 12.

For a second year in a row, coach Mike Leach has dipped into what is a limited form of free agency and recruited a graduated quarterback. He used the same lure of leading the nation in passing. This time, he didn’t have to go to East Carolina, instead just 70 miles down the road in Cheney.

“Yeah, it was quite similar,” Leach told the Spokesman-Review by phone Saturday. “He was more familiar with us than Gardner. Gardner was familiar with us, but Gage a little more first-hand, I would say.

“He’s going to have to compete for everything he gets, just like if he’s lucky enough to go to the next level. So I don’t know, I think it should be very competitive because we really have three quality guys.”

The competition to replace Minshew includes Trey Tinsley, Anthony Gordon, Cammon Cooper and Gunner Cruz. But except for injury, there’s no way Gubrud won’t be the guy in charge of following up on the 11-2 season.

The senior transfer rule is suddenly becoming a niche resource for some schools, although notably not Washington. The UW’s academic calendar has a mid-December deadline for application for graduate schools. Coach Chris Petersen also indicated he has had no success in getting the grad school office to lower admission standards for a one-and-done football player.

So for a second year in a row, Leach has hired a fresh gun to run the Air Raid.

“Well, we’re a little out of sequence a tiny bit as far as the class, which that happens,” he said of adding a graduate transfer again. “We’ve got three seniors and, what, several sophomores and a freshman.

“The grad thing, regardless of position, that’ll always be something we look at as a resource. But with that said, you’ve still got to win your spot. In our case in particular, I wouldn’t think we’d be stigmatized by it, even if it were to happen twice in a row, given all the quarterbacks we’ve produced here and will continue to produce.”

If the the strategy becomes routine, Leach is going to have a harder time recruiting freshman quarterbacks. But he has shown no particular concern for hurting the feelings of a newbie, or an incumbent player. With the chance to be the nation’s passing leader, graduate transfer QBs could become frequent flyers into Pullman.

Awkwardness has never been something that bothers Leach. He not only embraces it, he may have mastered it in college football, including during the recruitment of Gubrud.

Leach showed Gubrud the team’s highlight video of the 2018 season, which included a 59-24 win over Eastern Sept. 15.

“Kind of highlights of the season, the locker room, the pageantry and things – and he’s one of the victims,” said Leach. “He said, ‘I’ve never gone on a recruiting visit where I was on the highlight film – the one where bad things are happening.'”

The video probably didn’t have much on the 28-15 loss on the Apple Cup, where Minshew, a Mississippi native, seem to struggle in the snow and cold. But Leach is getting craftier, working the grad-transfer gig through a player from a place where game conditions are identically crappy.

Now that western Washington winters are similar to those east of the Cascades, Leach may have solved his Apple Cup nightmare. If so, Huskies fans can blame UW’s grad schools for not playing ball. Why can’t Washington have a grad school the football team can be proud of?