Thiel: After the jokes, Kraft needs to go high

If Patriots owner Robert Kraft is guilty as charged, he might do a great public service by explaining to his good friend how human trafficking works. 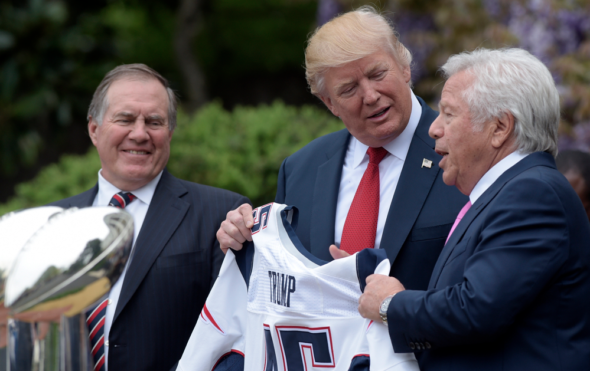 News Friday of New England Patriots owner Robert Kraft’s imminent arrest for misdeeds in a sleazy Florida strip mall massage parlor inspired a predictable social media firestorm of mockery. For those who have yet to recover from the Pats’ sixth Super Bowl triumph three weeks ago, the episode was a delicious continuation of the tawdriness that is stuck in the franchise’s flesh like a porcupine quill.

West Palm Beach police say Kraft was videotaped in the parlor having sex on two occasions. He was charged with solicitation of prostitution in connection with an investigation of a large international human trafficking ring.

The fact that Kraft, a billionaire who could afford all kinds of higher-priced company in seclusion, was allegedly caught by a police camera in a sting where the going rate was $59 for half an hour, is just one of the episode’s several screaming absurdities.

But the same national bewilderment attended similar misdeeds by Bill Clinton, Hugh Grant and former Seahawks star Eugene Robinson, to name a few among many.

Amusing at it is, the desire of well-off men to risk so much for so little is a secondary palm-to-forehead moment. The bigger, unfunny deal is the victimization of the women forced into the sordid business of sex slavery.

“The story is not Bob Kraft,” William Snyder, sheriff of Martin County, said in a phone interview with the Boston Globe. “The story is that dozens of women in Southeast Florida along the Treasure Coast are living in rudimentary living conditions and being coerced into acts of sexual conduct.”

That’s why after the sports-world snickering fades, the soaring problem of human trafficking remains. The women, mostly from China, South Korea and Thailand who speak little English, are lured by the promises of real jobs, then sequestered in the small spas. They see from seven to 15 men a day,  in many cases leaving one establishment only to be shuttled to another.

“We’ve done around-the-clock surveillance, and they never leave,” Snyder said. “They are squatting at the back door, cooking on a hot plate. There’s no washing machines or dryers. There’s no transportation.

Nationwide, an estimated 9,000 illicit massage parlors, many in suburbs, are in operation, according to Polaris, a Washington, D.C.-based nonprofit that operates the national human trafficking hot line, according to the Globe.

The state of Washington long has been a port of entry for human traffickers. It was the first state in the country to create an anti-trafficking task force in 2002 and to criminalize human trafficking in 2003.

Progress has been made. In one recent example, Kent police late in 2018 shut down 18 massage parlors, and put a noteworthy dent in related crime, per KOMO News.

Last month, King County, the City of Seattle and Sound Transit announced they had joined with business rivals Alaska Airlines and Delta Airlines to create a public awareness campaign that encourages victims and survivors of human trafficking to get the help they need. It expanded a previous effort that dramatically increased the number of people who called the national hotline for resources, including medical care, financial assistance and housing.

“We have the dedicated employees, strong partnerships, and shared commitment needed to stop labor and sex trafficking in our region,” King County Executive Dow Constantine said. “Human traffickers prey on people in our community who are vulnerable, specifically targeting people of color. Our united effort will connect survivors with the resources they need to break free and thrive once again.”

The trafficking victims, their supporters, the police and the politicians could wind up benefiting from Kraft’s apprehension, presuming charges are true (I’m going to guess he didn’t stage this as a ploy for more money and attention).

There’s nothing like a national sports figure getting busted for something slimy to bring daylight to the matter.

For the next few weeks, sports and news media will be generating steady news about about the national prevalence of the criminal activity, as well as the fate of the owner of sports’ most successful franchise.

The story will put more drama into the fight over the border wall, invented by Kraft’s good friend, President Trump, whose Mar-al-Lago residence is not far from Kraft’s alleged escapades. Renewed attention will be placed upon the ports of entry in states such as Washington and Florida as the largest point of immigration problems, not the desert wastelands.

The league is not going to take away Kraft’s team over a misdemeanor charge, but Commissioner Roger Goodell probably wouldn’t be disappointed if Kraft, 77, put the team on the market.

Independent of the court’s punishment if Kraft is convicted — likely to be probation and community service for a first-time offender — the NFL will be obligated to come up with a fine and suspension, because owners and employees are subject to the same code of conduct as players.

But no fine or suspension of Kraft would be meaningful. What would be meaningful after a conviction is if Kraft owned his mistake, and shook loose some of his wealth to help curb the nasty business of human trafficking that he was helping sustain. Many are the ways private contributions in technology, information, equipment and victim assistance can begin to stem the horror.

I don’t know about Florida’s immigration practices, except to say help obviously is needed. Help could come in the form of improved federal policy.

If this story from The Guardian is accurate, Trump’s hard-line immigration policy could become a gift to human traffickers by forcing undocumented migrant workers, like those Trump employs at his golf resorts, to go underground, where they are at greater risk of slavery and human rights abuses.

Perhaps the next time Kraft has lunch with his pal at Mar-al-Lago, he can suggest that Trump’s re-election chances would improve by getting smarter against human trafficking instead of more foolish.

Sure, it’s a long shot. But Kraft is a winner. So much winning.

Kraft might suggest to the judge that working on Trump can be a fulfillment of his community service obligation. Although that might mean foregoing the opportunity  of seeing video of Kraft scrubbing public toilets.