Seahawks put franchise tag on sack-master Frank Clark. Which won’t keep them from drafting another pass rusher. You can thank Malik McDowell. 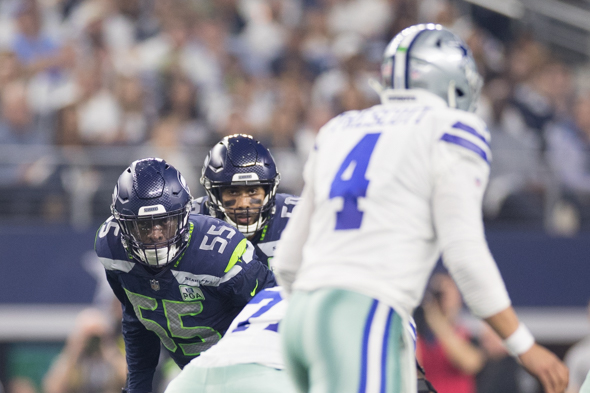 When last we saw the Seahawks, the defense had just given up to the Dallas Cowboys 380 yards and 24 points, including 130 yards in two touchdown drives in the fourth quarter. So no, DE Frank Clark — who along with LB Bobby Wagner, were Seattle’s only game-changing defenders — was not going anywhere this off-season.

Relative to recent history, the Seahawks defense wasn’t all that good last year — the plus-15 turnover differential that led the league masked the rankings of 15th in yards and 11th in points given up. Allowing Clark, who led Seattle with a career-high 13 sacks, to enter free agency after four years of increasing productivity would have been daffy in the extreme.

Monday the Seahawks, ahead of a 1 p.m. deadline Tuesday for such designations, deployed the seldom-used franchise tag to extend Clark’s tenure for at least one year at a league-rules-mandatory $17.128 million, per NFL.com.

Little surprise attended his retention, which had been forecast by coach Pete Carroll the day after the playoff loss in Arlington, TX.

The franchise tag is a club-friendly way of kicking the can down the road. The sides will continue to negotiate for a long-term extension, which by league rule can extend only to July 15, after which his one-year deal contract is fully guaranteed. No new deal can be struck until after the regular season.

The Seahawks chose the non-exclusive franchise designation, meaning he can negotiate with other teams, but if he were to sign elsewhere, the team signing him would have to send two first-round picks to Seattle. Not happening.

Clark’s 35 career sacks are 10th on the Seahawks’ all-time list and his 32 sacks over the past three seasons are ninth-most in the NFL. In the Cowboys game, he had the Seahawks’ only sack, plus three QB hurries and four tackles, one for loss.

And he’s only 25, seeming to grow up a little the past season in the absence of several legendary leaders on defense.

“Made a huge step this year in terms of leadership, growth and maturity,” Carroll told reporters at the scouting combine in Indianapolis last week. “It was so obvious. I was really proud of seeing that develop for Frank. He played great too. He’s a very valuable football player.”

A reminder of how important Clark is for Seattle came with the news Saturday that the Seahawks officially cut ties with DE Malik McDowell, whose non-football injury accident with an ATV became one of the most bizarre chapters in Seahawks personnel history.

Had McDowell justified his unexpected selection with the 35th pick in the second round of the 2017 draft, the Seahawks might have had the best rush-edge tandem in the NFL, or at least since Michael Bennett and Cliff Avril were the chief QB annoyers/destroyers. But no.

Drafted from Michigan State at 20, McDowell was said to be a top-10 physical talent in a premium position. Yet red flags abounded because of questions about his maturity and drive.

Much in the manner of the trade for WR Percy Harvin, the Seahawks took the we-can-fix-him approach but came to discover he damaged his own goods.

McDowell signed his $6.9 million rookie contract, attended OTAs, but never made training camp after the Seahawks in July disclosed the mysterious ATV accident supposedly in his home state, for which a police or first-responder report has never surfaced.

Carroll acknowledged McDowell had “a very bad concussion” but was otherwise mum about the circumstances and health consequences. The Seahawks paid him a $3.1 million signing bonus, but he never played a down.

While it’s true that the waste of the high pick was mitigated some by the four lower draft choices acquired by trading down from the 26th spot — they selected safeties Tedric Thompson and Delano Hill, CB Mike Tyson and running back Chris Carson — a hole still had to be filled on the defensive line.

At the start of the season, they gave up WR Jermaine Kearse and a second-round pick to the New York Jets in exchange for DT Sheldon Richardson. He played reasonably well in 2017, but left for free agency after one season.

The popular speculation is that if the Seahawks use their first-round pick at No. 21 in the April draft, they will try again to get a pass rusher to keep some of the double-teams away from Clark.

McDowell may be gone, but he is the non-gift that keeps on not giving.