The Seahawks’ hope to return the offensive line intact was dashed Tuesday when LG J.R. Sweezy took a two-year offer from Arizona. 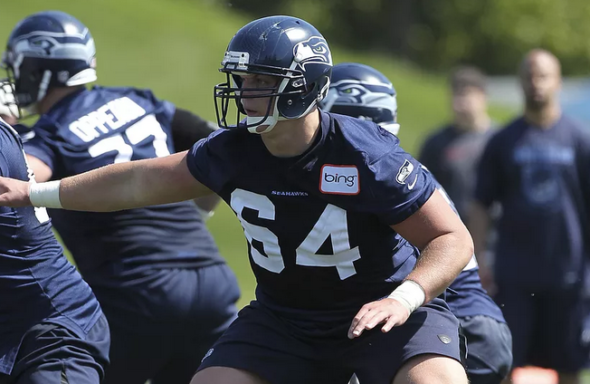 J.R. Sweezy is taking a two-year deal to join the Arizona Cardinals. / Seahawks.com

The Seahawks’ personnel plan for 2019 took an early hit Tuesday with word from NFL.com that LG J.R. Sweezy has agreed to a two-year deal with the Arizona Cardinals, making him the second starter lost before NFL free agency begins officially at 1 p.m. Wednesday. Over the weekend, nickel CB Justin Coleman was reported to have agreed to sign a four-year deal worth up to $36 million with the Detroit Lions.

A big part of the Seahawks’ return to the playoffs in 2018 was improvement along the offensive line, which helped produce 2,560 yards rushing that led the NFL.

Sweezy, who returned in free agency to the Seahawks the past summer after two seasons in Tampa, started 13 games. He was credited, along with newcomer RG D.J. Fluker and position coach Mike Solari, with helping revive a failing run game that had always been a hallmark of Pete Carroll’s teams.

Fluker is also a free agent, and Carroll said multiple times during and after the season that his hope was to have Fluker and Sweezy, 30 next month, return to keep intact a unit that includes returnees LT Duane Brown, C Justin Britt and RT Germain Ifedi.

In a tweet Tuesday, Fluker sounded as if interest has yet to come his way.

I believe in myself. I know what i bring to the table!!! I am warrior and I play my ass off. ILL GO GET IT LIKE ALWAYS!!! THE PASSION I GOT CANT BE MATCHED!! I FEAR NO MAN!!

He was cut in 2018, when the Seahawks picked him up for $1.5 million. He was asked to early in the season to switch from right guard to left guard, where he had never played. But his smooth transition was cited as part of why the ground game had such a strong reversal from 2017.

Four-year veteran Ethan Pocic would seem the numerical replacement, but when Sweezy missed time this season, third-year Jordan Simmons stepped in and impressed. He went down for the season in December with a knee injury.

If Pocic or Simmons aren’t ready to step up, the Seahawks have to figure out whether to pursue a veteran in free agency or take a rookie in the draft, where at the moment they have only four picks.

Coleman’s deal with Detroit made him the NFL’s highest-paid slot cornerback. The Seahawks knew it was likely they couldn’t afford him after two solid seasons in Seattle, following two with New England.

That may have been why the Seahawks made the move last week to re-up restricted free agent CB Akeem King to a one-year, $1.4 million deal. King, 26, joined the Seahawks’ practice squad in September 2017. He was promoted to Seattle’s active roster for the first time in September 2018 and appeared in all 16 games, finishing with 21 tackles and one quarterback hit.

Besides re-signing King and offering a non-exclusive franchise tag to DE Frank Clark, who reportedly won’t sign the offer until he gets a long-term deal and may hold out of training camp, the Seahawks have been quiet in the marketplace, not yet engaging in tentative deals with free agents.

Given their history of passing on the big-ticket hires at the outset of free agency, the quiet isn’t surprising. But filling in for the unexpected loss of Sweezy adds to the to-do list.