No. 1 Gonzaga scored half its season average in a 60-47 stunner versus St. Mary’s for the WCC tourney title. But Killian Tillie is back for the NCAA run. 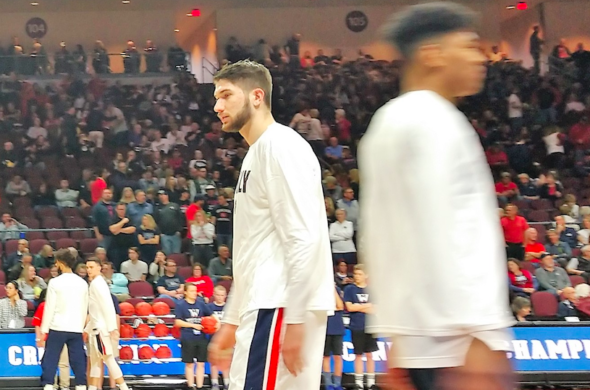 LAS VEGAS – They are a basketball team that occupies the No. 1 position atop the national collegiate polls. They are about to be one of the top four seeds into the NCAA Tournament field, despite having their 21-game winning streak snapped Tuesday night.

Next week can’t get here fast enough for the Gonzaga Bulldogs.

“For us, we just want it to hurry up and start,” coach Mark Few said. “Really, ever since coming out of Maui, we’ve been kind of waiting for it to start.”

Gonzaga won the Maui Invitational in late November, beating then-No. 1 Duke along the way to rise to No. 1 itself the first of two times this season.

This week was expected to do little other than provide something of a distraction from the anticipation and the waiting that the Bulldogs have been doing since Hawaii.

But instead of a seventh consecutive West Coast Conference title, the St. Mary’s Gaels earned the WCC’s automatic berth to the tournament with a 60-47 victory at The Orleans Arena (box).

“It was our worst offensive game of the year,” Few said. “Give them credit for that.”

It took a 37.5 percent shooting performance to derail the Gonzaga juggernaut. The Bulldogs made 18 of 48 shots in falling 43 points shy of their season scoring average of 90.2 points a game. They made only two of 17 from behind the 3-point line.

The shooting woes were seen in microcosm in the personage of Zach Norvell Jr. Gonzaga’s third-leading scorer behind Rui Hachimura and Brandon Clarke, averaging 15.8 points a game, scored two. He made one of 11 field goals, missing all six 3-point attempts.

Yet with about 13 minutes to play, Gonzaga found itself trailing only 42-41, and the Bulldogs (30-3) had the ball. Josh Perkins was open off the left elbow, outside the arc.

But like most of the Zags’ long-balls, Perkins’ shot was off.

The Gaels (22-11) scored the next six points and never looked back. But the Gaels earlier may have looked back for inspiration — on Feb. 9, they were humiliated at home 94-46 by the Zags.

While another WCC title would have been nice, for these Bulldogs, the goals are loftier.

Despite the success the program has enjoyed under Few, Gonzaga has made just a single Final Four appearance. Two years ago the Bulldogs lost the national title game to North Carolina.

Sights are set at the top again, no matter Tuesday’s upset.

To accomplish that goal, things must continue to go well. There have been challenges.

“For us to go through that stretch, that gives me great encouragement,” Few said. “Obviously, these guys have taken every challenge.”

From the start, Gonzaga found itself short-handed.

Killian Tillie returned to the rotation at the WCC Tournament this week after having played nine games the entire regular season due to injuries. The versatile junior from France is available when the NCAA Tournament begins, either March 21 or March 22.

Tillie was one of the heroes as a freshman during the tourney run to the national title game. Then a year ago in three WCC tournament games in Las Vegas, he made 13 of 14 3-pointers, and was the Bulldogs’ leading scorer at 12.9 points a game before being injured in practice prior to a Sweet 16 game against Florida State.

Tillie watched that game in warmups on the bench. The Zags lost, 77-60.

Then Tillie missed the start of the 2018-19 season after late-October surgery to repair a stress fracture in his right ankle. He returned, played those nine games, then hobbled off the court again against San Francisco Feb. 7 with another right foot injury.

Tillie made his first appearance since that February evening during the 100-74 semifinal victory over Pepperdine Monday. He entered with 15:17 to go in the first half, and bringing the Zags-heavy crowd to its feet with a roar. Then, when he made all three of his 3-pointers, the Bulldogs faithful went nuts.

“That was something huge for us,” said Clarke, a senior, on Monday of Tillie’s return.

“We actually played off his energy,” Norvell added.

Against St. Mary’s, Tillie had five points in 12 minutes off the bench.

The Zags have experience dealing with his absence. Gonzaga began the season with nine consecutive victories. They rose to No. 1 after upsetting Duke in the finals in Maui Nov. 21. That early success began the anticipatory ramp up to March Madness.

Three games after the Maui upset, the Bulldogs needed a buzzer-beating field goal from Rui Hachimura to hold off unranked Washington at home. That close call was followed by the two consecutive losses.

“We were low on bodies at that point,” Few said. “But the Tennessee game was a really good game. We just did some things down the stretch . . . then how we dealt with this league. I think the numbers have shown that this is the best league out West. For us to have that type of separation . . .”

Gonzaga rolled through the WCC 16-0, winning by an average of 27 points. Against Pepperdine in the conference semis, it led by 40 before substitutions allowed the Waves to climb closer.

Tuesday was the 22nd consecutive time Gonzaga made the WCC championship. Few, in his 20th season, never has failed to advance to the title contest.

Victory Tuesday would have been nice. It wasn’t the one the Bulldogs want.

After the interminable wait, Gonzaga will learn Sunday against whom the road begins for the quest to win the school’s first national title.

“It’s just an honor to be able to be involved with it,” Few said. “To coach it.”