Ichiro will start, and Japan will exult once again

Despite his 45 years and his 2-for-31 spring, Ichiro will start this week for the Mariners in Japan, where a nation turns its lonely eyes to him again. In 2012, Ichiro’s initial at-bat when the Mariners first played the A’s in the Tokyo Dome was bathed in camera flashes by his fellow Japanese. / Drew Sellers, Sportspress Northwest

TOKYO — Driving around Phoenix during spring training, I saw several advertising billboards with “Suzuki’’ posted dramatically (most of which represent a law firm). Interestingly, Ichiro Suzuki said he never saw those billboards. Then again, he also never had Suzuki printed on his Mariners jersey either, even though that is his last name.

Instead, he has always been referred to in Seattle as Ichiro – “Ee-Chee-Ro!’’ as the fans often shout — which has been on his jersey since he started with the Mariners in 2001.

Although Seattle traded him to New York in 2012,  and he played just 15 games in his return to the Mariners last year, Ichiro is back for 2019 and remains so popular that a large group of fans lined up every day for his autograph during batting practice at spring training. During the spring training games he played, he received louder cheers and applause than any other player.

“I’m very grateful for that,’’ he said of the fan support.

Fans at the exhibition games in the Tokyo Dome Sunday and Monday raised signs and jerseys while chanting his name in his honor. The Japanese broadcast also frequently showed him on the field and in the dugout. It also showed at least five times him making a great throw from right field to third base to keep a runner from advancing.

According to the excellent author, Robert Whiting, who wrote “The Meaning of Ichiro’’  and “You Gotta Have Wa’’ about baseball in Japan, Ichiro had been the country’s No. 1 most popular sports figure for many years, even after he left the country to play here. He is so popular that there is an Ichiro museum owned by his father in Nagoya that has received many visitors.

The Angels’ Shohei Ohtani, however, surpassed him as Japan’s No. 1 athlete last year. Which isn’t surprising considering that Ohtani, who both pitches and DHs, was the American League rookie of the year last season while Ichiro batted just .205 before being taken off the Mariners roster in early May. He stayed with the franchise as “assistant to the chairman,” which allowed him on the field in uniform, but never during a game.

Nonetheless, Ichiro still remains hugely popular and he will be loudly cheered and celebrated when he starts for the Mariners Wednesday and Thursday in their season-opening games against Oakland (2:35 a.m. PT, ESPN, both mornings).

“Ichiro is going to start for us in the first game against the A’s,” manager Scott Servais told reporters following the Mariners’ 6-5 win Monday over the Yomiuri Giants in the second exhibition. “He’s been playing fine in the outfield. He’ll start the game and we’ll see how it plays out from there.” 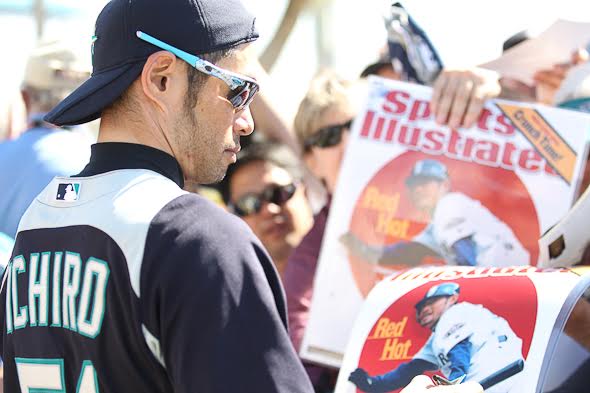 Ichiro hasn’t had a good spring. He had two singles in 25 at-bats in Arizona for an .080 batting average. He went a combined 0-for-6 in the two exhibition wins over Yomiuri. Two weeks into the spring games, he said he didn’t even know whether he would make the team when asked about it.

These will be Ichiro’s first games in Tokyo since Seattle also opened the 2012 season there against the Athletics. He also played in the 2002 MLB All-Star series in Japan. His last game while playing in Japan’s Pacific League with the Orix Blue Wave was in 2000, the year before he signed with the Mariners.

The Mariners have had at least one Japanese player on their roster every season since 1998 (Mac Suzuki, no relation, also pitched in 1996). Ichiro clearly has been the overwhelming best – and favorite player. Heck, the Mariners gave out Ichiro bobbleheads even after they traded him away. He is so popular in his native country that the newest Mariner from Japan, 27-year-old pitcher Yusei Kikuchi, who signed with Seattle this winter, says Ichiro is his favorite player.

“I’m really happy he is my teammate,’’ Kikuchi said during spring training. “I get to talk to him, but I still get nervous and my heart starts beating. I always get excited just to talk to him.’’

Kikuchi was nine when he first saw Ichiro playing for Orix in 2000. He is so much Kikuchi’s favorite player that the pitcher said he has read every book and article about Ichiro since then, and also referred to him “as a person in the sky, a legend.’’ Shortly after his trade, and before his first at-bat as a Yankee, Ichiro bowed to the crowd at Safeco Field. / Drew McKenzie, Sportspress Northwest

“He’s like a text book, pretty much,’’ Kikuchi said. “Everyone looks up to him. He’s an inspiration. Everyone wants to be like him. I am one of those people as well.’’

After starting in Japanese pro ball at 18 in 1992, Ichiro says he was inspired to play in MLB after Hideo Nomo signed with the Dodgers in 1995. “When Nomo went over there, that’s the first time I knew about players going over there,’’ Ichiro said.

Ichiro has had an amazing career here, winning Rookie of the Year and Most Valuable Players awards, making 10 All-Star teams, setting the record for most hits in a season with 262 in 2004, compiling more than 200 hits in 10 seasons, scoring more than 100 runs in eight and piling up 3,089 hits so far. And all this after leading Japan’s Pacific League in batting seven times.

He is a certain Hall of Famer. Although when he will do so depends on when he retires and becomes eligible. 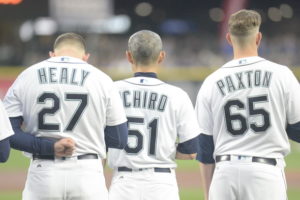 Ichiro made it to Opening Day 2018, but not much farther. / Alan Chitlik, Sportspress Northwest

That brings up the question of whether Ichiro will play when the Mariners return for their home opener against the Red Sox March 28. Maybe not, but you never know – spring training stats sometimes are quite different from the regular season. MLB allows Seattle and Oakland to carry 28 players in Japan, then cut to the usual 25 for the domestic season.

Despite his age and steadily declining performance – he hasn’t hit .300 since 2010 and has really only had one good season in the past four — Ichiro has often said that he plans to play until age 50, longer than former Mariners pitcher Jamie Moyer lasted (he retired at 49 in 2012).

Ichiro has said he doesn’t even think about playing in the 2020 Tokyo Olympics because he still wants to be in the majors then.

“I think a 45-year-old baseball player really shouldn’t be thinking about the future,” Ichiro said. “It’s about today. I’m very satisfied with today and how it went. I’m just going to take it day by day.’’ 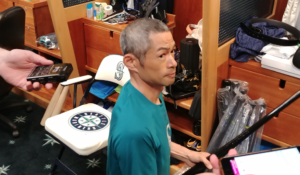 Chatting with reporters in 2018 while kneeling in front of his Safeco Field locker, Ichiro talked of the day-to-day, not the year-to-year.  / Art Thiel, Sportspress Northwest

Perhaps he can keep playing. As old as he is, Ichiro had the lowest body fat of anyone on the team – a mere seven percent (he says his body hasn’t changed much during his career). That’s even though all of his teammates are younger, including outfielder Braden Bishop, who is 20 years younger.

“One of my goals when I turned pro as time went by was that one day I would play with players who were kids when I was still playing (years ago),’’ Ichiro said. “I’m now playing with guys who were in grade school when I was playing here.

“So I think that through these years and working harder and being where I am at today definitely gives me some satisfaction. One of the things I really wanted to do is happening.’’

One of the fans at spring training fans was wearing an old Ichiro Orix jersey, which was not surprising. When Ichiro debuted with the Mariners, I was in Japan at the stadium where the Blue Wave was playing. One fan who had sat in the bleachers behind Ichiro in right field for 20 to 30 games the previous seasons told me: “I miss him so much.’’ Another fan said, “Ichiro is still the property of Japan, so I like him.’’

So many Japanese fans still love him. Which they will show in the games here. Seattle fans here will show that as well, with many wearing a Mariners jersey with Ichiro on the back.

“I’m excited for him,” Servais said. “It hasn’t been a great spring training for him offensively. But if there’s anybody who can turn it on for a few days, it’s Ichiro. I look forward to the games coming up, and he will be in the lineup.”

Although “Suzuki” could very well be included on his Hall of Fame plaque.

Jim Caple, a longtime writer with ESPN and the Seattle Post-Intelligencer, is in Japan for the Mariners-A’s series.