Ducks deny Huskies, but The Dance is imminent

Oregon’s press again rattles the Huskies in a 68-48 loss in the Pac-12 title game Saturday. But the NCAA tourney is likely to beckon Washington Sunday. 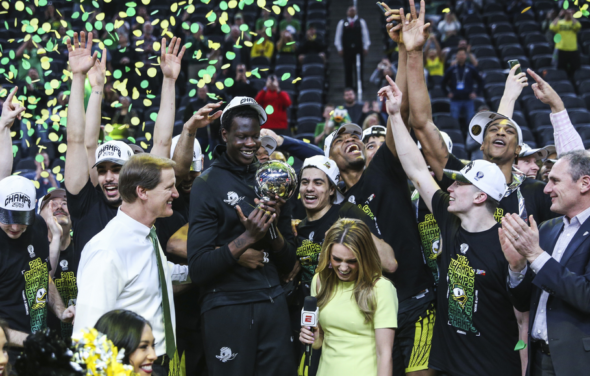 The Ducks, including 7-foot-2 center Bol Bol, who didn’t play again after a December injury, celebrate the Pac-12 tourney title in Las Vegas. / CharlesTaylor.co via Pac-12

LAS VEGAS – For one night, just about everything that could go wrong did go wrong for the Washington Huskies.

The silver lining was that the Huskies’ 68-48 loss (box) to Oregon Saturday night in the Pac-12 Tournament title game at T-Mobile Arena was not likely fatal to their bid for an NCAA Tournament berth.

The sixth-seeded Ducks (23-12), playing through the fatigue of a fourth game in four nights, one more than No. 1 Washington (26-8), earned the conference’s automatic berth in the 68-team field that begins play next week. The Huskies are virtually assured of receiving an at-large berth and will go “dancing” for the first time since the 2010-11 season.

“Right now, obviously, we’re all disappointed,” Washington coach Mike Hopkins said. “Losing stinks. Winning is great. We had a bad game. It happens. We just can’t have another one.”

The UW high point came 1 minute, 35 seconds into the second half, when Matisse Thybulle became the Pac-12‘s all-time leader in steals. Thybulle stepped in front of an Oregon pass, intercepted it and raced to the other end for a dunk that cut the lead to 30-28. He broke the mark of 321 held by Oregon State’s Gary Payton since since 1990.

“It’s pretty hard to wrap my mind around it,” Thybulle said. “You grow up idolizing guys like Gary Payton. I think he said it best the other day when he said, ‘Records are meant to be broken.’ I’m sure someone will come along and break my record. I’m happy to have it right now.”

The play didn’t do much good. Oregon reeled off a 16-0 run to extend the lead to 46-28 with 10:28 left. Noah Dickerson finally got a shot to fall a few moments later to end an 0-for-11 UW shooting drought over eight minutes.

No miracle comeback was in the offing. The Huskies in the second half missed 21 of 27 shots (22 percent) as they again had big trouble against Oregon’s full-floor pressure defense that includes four starters all six-foot-9.

The Ducks won their fifth tourney title and  joined Colorado in 2012 as the only team to win four games in four days at the conference tourney. Payton Pritchard led the Ducks with 20 points, seven assists, six rebounds and four steals.

“I told these guys they’ve gotta flush this thing down the drain,” Hopkins said. “Tomorrow will be a celebration. These guys are champions. Tomorrow will be about what this team has accomplished the last two years.”

Sunday afternoon, the UW will convene at the coach’s home to find out where and against whom it will begin its tourney saga. The Selection Sunday show airs on CBS at 3 p.m.

By reaching the conference title game, Washington should have no reason to fear a repeat of what happened to the Huskies following the 2011-12 season. Perhaps it was a bit of that history that kept the fire fueled for a three-game conference tourney that really meant little in the grander scheme.

In 2011-12 the UW rolled through the conference to win the regular season Pac-12 title against a field considered weak, much as this season has been considered nationally. That year, however, the Huskies exited the conference tournament early and become an ignominious footnote to history —  a major conference champion that was left out of the NCAAs.

That season began a UW basketball descent that eventually cost coach Lorenzo Romar his job. The Huskies have not been back to the NCAA Tournament since.

A stellar recruiting class that year held the prospect of saving Romar’s job. It didn’t.

Much of the class bolted for what they must have considered greener pastures.

The one that didn’t, newly minted Pac-12 Player of the Year Jaylen Nowell, honored his commitment despite the coaching change. Nowell joined a group that had a solid nucleus of sophomores who became the senior class that drove this season.

“Truthfully, it’s amazing,” Nowell said of his decision to stick with the Huskies. “After I met Coach Hopkins, and he talked with my family, I just knew this was going to be the right place — not only for me, but everybody else that is going to be here.”

The turnaround under Hopkins was almost instantaneous.

“These guys are the ones that have done it,” Hopkins said. “They’re champions. They need to feel good about playing next week, about getting into the NCAA Tournament.”

A season ago, Washington was 21-13 and made the NIT field. The Huskies head into the NCAA Tournament next week carrying at 26-8 mark, most win since 2009-10 when the Huskies reached the Sweet 16 and finished 26-10.

The seniors — Dickerson and Thybulle, along with David Crisp and Dominic Green — have stayed and contributed mightily. Despite another sour game against the Ducks, who won 55-47 at Hec Ed March 9, the reward will be a first NCAA bid for the seniors.

“We just didn’t hit shots today,” Hopkins said. “The thing about tournament play, you’ve just got to get hot at the right time. Oregon is the hottest team in our conference. Hopefully that will make three teams in the Pac-12 getting into the NCAA Tournament.”

Besides Oregon and Washington,  Arizona State is a bubble team.

As for the future, that appears bright along Montlake as well.

Hopkins recruited his old stomping grounds around Syracuse, where he spent more than two decades as an assistant to Jim Boeheim, to get athletic sophomore Nahziah Carter to leave Rochester, N.Y., and come west. In January, he had a commitment from another Rochester product, 6-foot-9 center Isaiah Stewart, to form the cornerstone of a stellar incoming class.

Stewart is ranked in the ESPN Top 100 recruits as the No. 4 overall prospect out of high school this year.

But that thought is for down the road. Sunday is a day of celebration.