The Huskies nearly beat the Tar Heels in the 2011 NCAA tourney. If the 11.5-point underdogs pull it off Sunday, be sure to keep a safe distance from UW coach Mike Hopkins. 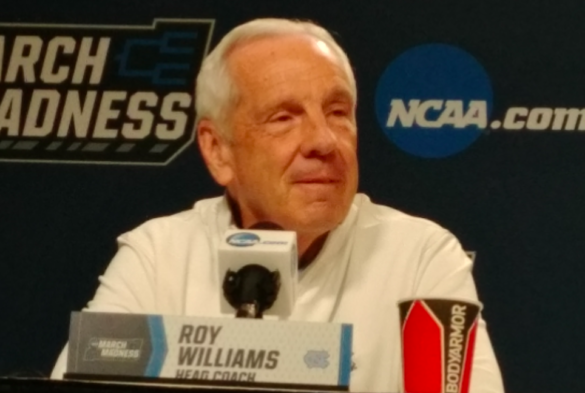 COLUMBUS, Ohio — As someone who freely admits he’s “49 going on 14,” Mike Hopkins at the moment is all Disneyland, horse rides and slip-n-slide. In his second year as a college basketball head coach after a two-decade apprenticeship, his giddy meter has pinned the needle.

“We’re in March Madness playing against North Carolina,” he said, beaming, Saturday afternoon. “I mean, is there anything better?”

Huskies fans might feel differently, wishing their team in the second round (11:45 a.m. Sunday, CBS) had drawn a less formidable opponent than the Tar Heels (28-6), the No. 1 seed in the Midwest Region with all the prestige, pomp and presence of 18th-century British royalty.

But Hopkins, having been a player and coach at Syracuse when the Big East Conference was at the vortex of college basketball, radiates in this culture.

“March Madness is an opportunity for Cinderella — having a chance to play for a national championship,” he said. “We didn’t come here to just get here. That’s not our standard.

To the unwashed in Las Vegas and others with a financial stake in the outcome, it looks like the ninth-seeded Huskies are 11.5-point underdogs to an outfit that plays the game at another level. To Hopkins, it smells like teen spirit.

“The staff was up all night,” he said of his assistants following a persuasive 78-61 triumph over favored Utah State Friday night. “They look like they haven’t slept in five days (yet) are all excited in practice.”

If enthusiasm were the primary definer of tourney success, the Tar Heels would stand little chance. But it’s almost always about talent, so much so that North Carolina looked to be believing its own hype Friday night when they trailed at halftime 38-33 to 16th-seeded Iona, yet had no problem finding the accelerator in the second half for the inevitable blowout.

“Probably the thing I despise more than anything, in basketball or in life, is somebody trying to be cool,” he said. “I thought in the first half we didn’t have the passion.”

Since it’s not always about talent — recall last year that Maryland-Baltimore County beat No. 1 Virginia 74-54, the first win by a 16th seed in tourney history —  the notion of upset hangs in the air over this sports championship as no other.

Part of it is that the 68 entrants are given a ranking by a committee of bureaucrats. By definition, it rankles the lower seeds to no end, because they have already won titles or have top-tier wins, yet enter diminished.

Additionally, the Huskies, as regular-season champions of the denigrated Pac-12, feel the disparagement here in Big 10 country and the hometown of the Ohio State athletics colossus.

“Our conference got a hit,” said post man Noah Dickerson. “People are talking bad about us. I understand it’s an East Coast bias. I’m from the East Coast. It’s understandable. But we do have some hoopers over here.”

That is something to which Williams can testify. In the second round of the 2011 tourney, the Huskies met the Tar Heels virtually on their home court in Charlotte.  In one of the most agonizing outcomes in UW hoops history, the seventh-seeded Huskies (24-11) controlled the game for the first 36 minutes, but a series of late-game mishaps helped thwart the upset.

Asked about the game, Williams had an acute recall of a foe led by Isaiah Thomas and Terrence Ross, both of whom have gone on to long NBA careers.

“I remember they were very, very good,” he said. “We were lucky to win.”

Huskies fans would agree. Trailing by the final score with 1.1 seconds left, Thomas launched a potential game-tying three from the corner. It looked to be short, but Carolina’s John Henson leaped to grab it at the rim, provoking the Huskies to scream for basket interference. They didn’t get the call.

Williams recovered from the near-coronary, and the Tar Heels continue to flourish. Entering the season, North Carolina had the third-most wins in NCAA history with 2,232, trailing Kentucky and Kansas.

This year, another stellar team with three senior starters leads the nation in rebound average — the Huskies’ biggest weakness, mostly because of the zone defense — and has won 16 of its past 18 games. The only losses were to No. 4-ranked Virginia 69-61 and No. 5 ranked Duke 74-73 in the Atlantic Coast Conference tourney title game.

Not coincidentally, all three ACC teams drew No. 1 seeds. The Pac-12 barely had three teams in the tournament, none seeded higher than Washington at No. 9.

Much as Williams might despise it, the Tar Heels are the cool kids. As they are at every NCAA tournament.

If they stay as cool as they were in the first half against Iona, the Huskies might experience what it feels, smells and looks like to create a slice of college hoops history. If it happens, be sure to stay a minimum safe distance from Hopkins.