We offer a guide to sorting the Mariners’ not-so-young newbies on the 2019 roster. If you’re willing to pay attention in a “step-back” year, Domingo Santana is your guy. 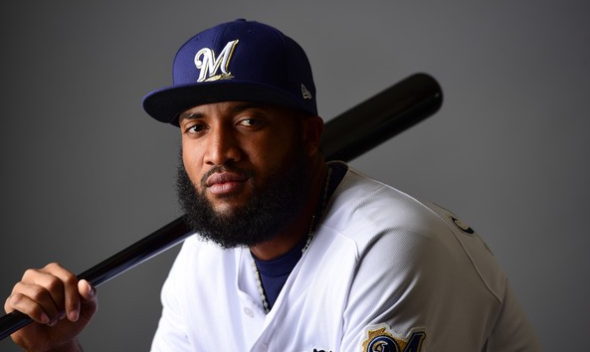 Domingo Santana could be the one new position player to have quick impact among the 2019 Mariners. / Milwaukee Brewers

To the Mariners’ more casual followers — whose numbers grew exponentially after news that the club was taking a “step back” from their torrid 21st century pace of one playoff season per generation — the easy assumption would be that the 2019 season has been given over to youngsters for development.

That view would be scored: E-fans.

The roster and lineup for Thursday’s home opener at T-Mobile Park against the Boston Red Sox (4:10 p.m., Root) are replete with mid-career or later guys. Nearly all of the well-regarded kids acquired during the off-season to eventually replace Robinson Cano, Nelson Cruz, Mike Zunino, James Paxton, Edwin Diaz and others, who helped provide the most lackluster 89-win finish in club history, are in AAA Tacoma or lower in the minors.

The general plan is for the club to sit out the competitive festivities in 2019, then sprinkle in the ripening youth to make a contender . . . sometime.

It is the way of MLB these days, teams taking seasons off to accumulate powder for sustained explosions. Whether it works here is anyone’s guess.

But the Mariners have tried everything else in their 43 years, and managed only four playoff teams, so they have little to lose. A minimum of two million fans tend annually to show up anyway, for the pleasant summer evenings, beer, garlic fries and hitting on one another, so the outcomes upon the greensward are secondary.

Long-termers are players who have a chance to last slightly longer than the salutes in Tokyo for the final game of Ichiro. That might be a bad measurement tool, because the fans probably haven’t stopped cheering/wailing.

More realistically, they are players who seem to have multi-year futures with club. A bold assumption in view of general manager Jerry Dipoto’s preference for roster frenzy, but even rivers can be photographed with a sufficiently quick shutter speed.

Placeholders are veterans here for a paycheck and a chance to play well enough to get  traded by mid-season to a team for whom October is more than a run-up to Halloween.

Tweeners are guys who could go up, down or out.

Here’s a sorting, including the ages on Opening Day, of the 25-man roster the Mariners set Monday:

Noteworthy in this sorting is that every member of the bullpen seems to be a temp.

“Bullpens are about roles, where do guys fit,” Servais told MLB.com Sunday. “I do think it’s plain to all of our guys, there aren’t going to be assigned roles, so to speak, other than we like Strickland to pitch the ninth inning. Other than that, it’s going to be pockets and match-ups where they fit. You’re hoping that a few of our young guys really step up.”

Hoping. There’s a lot of that going around the Mariners in 2019.

In the position-player personnel mash of newcomers, there appears one player who is more than merely a hope.

Santana is the immediate and potential long-term starter in left —  despite having never played there in his career — who in 371 MLB games displayed serious power and an above-average throwing arm.

Acquired in a December trade for LF Ben Gamel and minor league RHP Noah Zafolas from Milwaukee — where he lost playing time in 2018 when the Brewers traded for Christian Yelich, the eventual National League MVP, and signed free agent Lorenzo Cain — Santana mostly killed it in spring training.

At 6-foot-5 and 235 ponds, Santana hit .400 with a Cactus League-high four homers and nine RBI and impressed Servais sufficiently to call him unique.

“He’s a big, hulking Dave Winfield-type,” Servais said Tuesday in his office before the final fake game, a 1-0 loss to San Diego. “He kind of looks bound up at the plate. But he’s got good bat speed, great strength and how he does it to produce power . . . he’s very unique.”

“Having thrown him batting practice, I’ve never seen a guy hit a ball that high,” he said. “He hit a ball I thought was straight up, and it went out of the park. It’s hard to do at (T-Mobile) for a right-handed hitter to hit a ball out in right center. Really hard.

“He’s really happy where he’s at. He’s comfortable. He knows he’s going to play and has done a really good job in left field.”

If you’re looking to invest a little attention in a new Mariner who’s already paying the adult fare for a movie ticket, Santana is your guy. Or if you want to skip the show for awhile, that’s OK too. If the club can take a developmental year, so can you.