The Mariners again bombed the starting pitching of the Red Sox, who left town 1-3 and lucky to have the one win. All hail the kings of March. 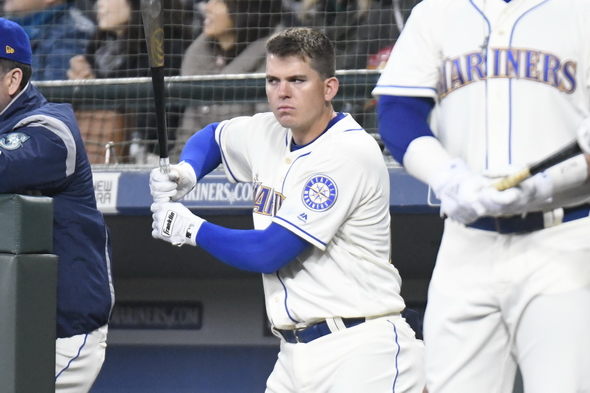 If you are puzzled about the Mariners’ first week, imagine how it must be for the Red Sox. They came to Seattle as defending world champs, then stumbled out of town with pants below, well, their red socks. Had the Mariners not trotted out an injured reliever Friday night, Boston would have lost all four games.

More galling, the Red Sox lost Saturday despite a Mariners defender making errors on three consecutive plays in the ninth inning, followed by a defeat Sunday in which Seattle relievers gave up four walks in the ninth.

Whether these horrifying baseball moments are anomalies or trends for either team is unknowable. It’s not even April, fercripesakes.

But when you don’t do Octobers, the Mariners will take what they can, however awkward the appearance. The Mariners collectively are Mr. March. Bring on the blood-pressure meds.

“We were actually lucky we won one,” said Red Sox manager Alex Cora after Sunday’s 10-8 defeat (box). “For whatever people think they’re doing as far as rebuilding and trading guys, look at the lineup. They got some hitters, some veteran guys that know what they’re doing.”

It seems to be true. In the 5-1 start, the Mariners have scored 48 runs, including 15 home runs and 30 extra-base hits, the latter a club record through the first six games. It was done mostly against one of MLB’s premier starting rotations: Chris Sale, Nathan Eovaldi, Eduardo Rodriguez and Sunday’s slappie, Rick Porcello (nine runs, six hits,  four walks in 2.2 innings).

The 34 runs against the Red Sox were one shy of the home record for a four-game series. For only the second time in club history, they have homered in each of the first six games. The record is eight, set in 1998, with guys named Junior, A-Rod, Edgar and Jay.

It’s amazing the slack that is created when a team starts with a pace that would generate more than 400 homers this season.

For perspective, the Yankees set the single-season MLB home-run record last year with 267, three more than the previous mark by aforementioned blacksmith-forearmed Seattle guys of 1998, blessed with the bandbox dimensions of the Kingdome.

So while pace can’t continue, the offense at least capable of this sort of tonnage on occasion can cover for a lot of failure elsewhere.

The Mariners knew going into the season that the bullpen was the roster’s weakest link, and the defense would be below average. Both have become worse because of injuries — 3B Kyle Seager is on the 60-day injury list after finger surgery, and nominal closer Hunter Strickland will be out at least two months with a strained lat, according to manager Scott Servais Sunday morning before the game.

“We’ll try to match up the best we can and put the right guys in there,” Servais said. “It’ll be a different guy at the end of the game almost every night, unless somebody takes it and runs with it.”

Both vulnerabilities came into play over the weekend. Ryon Healy at third base made a throwing error in the fourth inning that led to two unearned runs, bringing the Sox back into the game after the Mariners’ seven-run third. Seager’s replacement Saturday, rookie Dylan Moore, committed three consecutive errors in his first major league start, which allowed three runs, turning a 6-2 lead into a Wallenda wire walk before prevailing, 6-5.

In the ninth Sunday, trying to protect a 10-7 lead, reliever Cory Guerrin walked three to load the bases with one out and was pulled. His replacement, Chasen Bradford, who hadn’t pitched in the series, walked pinch-hitter Blake Swihart to force in a run, then struck out Christian Vazquez.

With everyone among the 33,391 at T-Mobile Park on their feet, including a considerable number from Red Sox Nation, No. 9 hitter Jackie Bradley Jr. was induced to ground out to second baseman Dee Gordon, the Mariners recording a second consecutive successful deployment of late-game disaster drills.

Cushion for lameness was created in part by a three-run homer from C Omar Narvaez in the third and a solo shot on the fourth by 1B Jay Bruce. Five Mariners had two hits: Bruce, Narvaez, Healy, Gordon and Mitch Haniger, and as a group the Mariners collected seven walks.

“Unbelievable series by our offense,” Servais said. “Our guys really swung the bats well. More than anything, they controlled the strike zone. We didn’t chase a lot. Got big hits. Everybody’s contributing, which is what it takes for us.”

With a double, single and walk, Healy is hitting .360 and seems much more productive.

“Ryon’s really changed his approach,” Servais said. “He adjusted his swing mechanically, cut down its length, which has made things simpler. He’s using the whole field to hit, walking a bit more and is a tougher out.”

At least early, the Mariners appear to have a number of tough outs. If they continue to create three- or four-run leads going into the ninth, they may have just enough to make fans forget Edwin Diaz.