This isn’t how the Mariners were supposed to start. But if they stick to GM Jerry Dipoto’s plan, things should be fine by midseason. 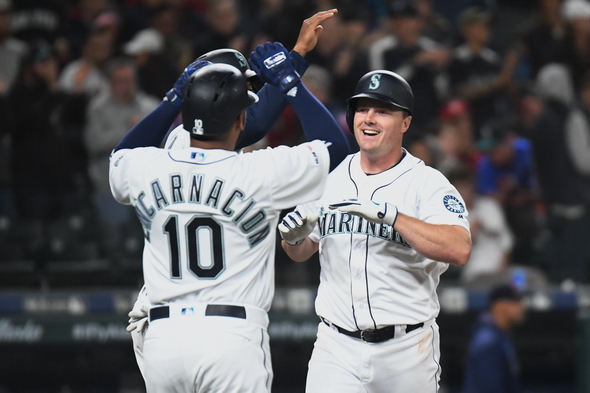 Edwin Encarnacion and Jay Bruce are among the likely departures by midseason. / Alan Chitlik, Sportspress Northwest

The Mariners are doing it wrong. Starting the season with the best eight-game record in club history is backward. To paraphrase Tom Hanks’ character in A League of Their Own, there’s no winning in tanking.

The Mariners set out in 2019 to be bad in order to be good, someday. Mortifying as was the decision to back off being competitive, especially for fans 22 and under who have no real recall of a live baseball playoff game in Seattle, there was a certain logic trading away expensive yet serviceable players for the hope of more talented prospects.

Lots of teams have done it. In the NBA, it’s practically a venerated institution, at least until consumers realize there’s probably a class-action consumer fraud suit in there somewhere.

The worst part about it is that fans are tempted to flirt with, well, expectations. That’s never been a good relationship for them. Expectations are a cruel mistress; nothing good has ever come of expectations for this franchise.

The two best seasons for the Mariners were 1995 and 2001. Nobody saw them coming. Remember when Alex Rodriguez, after the Mariners let him go for nothing in free agency to Texas, told reporters in ’01 spring training that the Mariners would win 110 games?

Everyone laughed and called him an obsequious suck-up.

Well, he was an obsequious suck-up, then and now. But he was also improbably right: They won 116 games.

Consider last season. Nobody expected the Mariners’ fast start. By early July, fans were scouting potential wild-card opponents for weaknesses. No one expected a collapse.

A month later, the Mariners were avalanching, burying hope under 12 feet of cold mediocrity. That may have been the worst 89-win season in MLB history.

Expectations play with the mind. Some fans have sniffed enough intoxicant to want the Mariners to go get Craig Kimbrel, the seven-time All-Star reliever, who remains an un-signed free agent despite being only 30 and the closer for the Red Sox last year when they won the World Series. He would be the one instant fix for the biggest roster weakness: No closer.

Kimbrel also made $13 million last season. While he’s obviously getting $0 right now, the contending team that signs him will be out big coin for a guy who hasn’t had spring training to practice his goofy pterodactyl pre-pitch pose.

Kimbrel would help temporarily, but his hire would throw overboard a lot of the rationale GM Jerry Dipoto used to justify eviscerating the roster. Kimbrel would be a stainless steel hood ornament on a 1963 Corvair.

Mainly, Dipoto, and most discerning fans, know this seasonal start is a freak on the order of a Mike Leach apology.

This many good outcomes happening to this ordinary a team is unsustainable. Perhaps the most telltale single stat is that the Mariners are 7-1 despite 13 errors, which is seven more than the next-worst team, the Red Sox.

Granted, the Mariners have played a couple of more games than other teams, but this team was on paper below average on defense before the season began, and has shown a propensity to flail about like Corgi puppies.

Also, the bullpen is reliant on guys with intensely modest histories of success. The ultimate fluke was the dramatic 2-1 win over the Angels Tuesday, when newcomer Anthony Swarzak hopped off the injured-list gurney to get the final two outs in Marco Gonzales’s splendid victory.

Swarzak is the classic MLB mound journeyman. Switched from starter to reliever earlier in his career, he’s on his seventh team in 10 seasons, bombing out last season with the Mets — 28 hits and 14 walks in 26 innings.

Now 33, he was a throw-in on the big seven-player trade that sent Robinson Cano and Edwin Diaz to New York, but showed up with a shoulder impingement that kept him out of spring training. The guy was a near-complete mystery.

“I saw him throw about five pitches in bullpen before we left (Peoria),” manager Scott Servais told reporters after the game.

Yet he came in to strike out Albert Pujols and get Jonathan Lucroy to ground out. Diaz couldn’t have done much better. It was Swarzak’s seventh career save. At least that’s a bit of return on his $8.5 million salary, but the likelihood of replication is dubious.

The two previous games were saved by guys who did it for the first time — Roenis Elias and Chasen Bradford. So was Bradford all calm and cool in the crucible?

“I couldn’t breathe there for a minute, but it was awesome,” he said, sounding like a teenager after his first kiss from a cute girl.

This is not a bullpen built to sustain excellence. Nor is the defense likely to save games. The Mariners can, however, rake a bit.

But blasters such as Edwin Encarnacion, Jay Bruce, Ryon Healy and even Tim Beckham figure to be gone to contending clubs by midseason. Because according to Spotrac, the Mariners in 2019 are 11th in player payroll at $151 million, $18 million above the league average.

That kind of payroll is no way to step back. So step back they will. We’ll just have to indulge them this rocky start.