In his first year of candidacy, Sonics star Jack Sikma was selected for induction into the Naismith Memorial Hall of Fame. Formal announcement is Saturday at the Final Four. 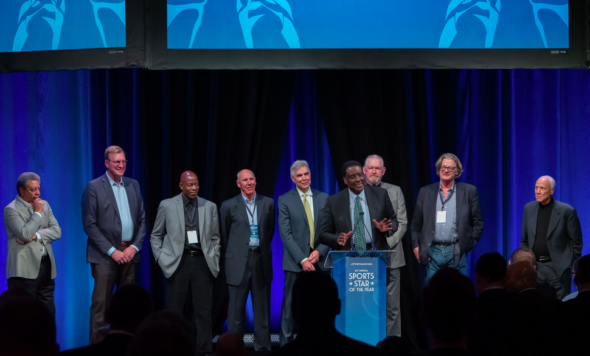 Jack Sikma, who in 1979 helped lead the Seattle SuperSonics to their only NBA championship, has been selected for induction to the Naismith Memorial Hall of Fame in Springfield, MA., a source told Sportspress Northwest. The official announcement will be made at 9 a.m. Saturday PT (ESPN2) in Minneapolis, site of the Final  Four.

Sikma, 63, was one of 13 finalists under consideration by the Hall’s Honors Committee, a 24-person panel of basketball experts whose identities are not made public. Eighteen votes are required for enshrinement, which takes place Sept. 5-7 in Springfield.

This was Sikma’s first year to be nominated, following a 14-year NBA career ended in 1991 with five seasons in Milwaukee. Other inductees with be announced Saturday.

Westphal played 36 games for the Sonics in 1980-81 and was Sonics coach from 1998-2001. Johnson was a color analyst on Sonics basketball broadcasts with Kevin Calabro in the late 1990s.

A 6-11 center from tiny NAIA Illinois Wesleyan, Sikma was a first-round draft choice of the Sonics in 1977. The Sonics reached the NBA Finals in his rookie season, losing to the Washington Bullets in seven games. The teams had a Finals rematch next season, after new coach Lenny Wilkens shifted Sikma from power forward to center.

The Sonics beat the Bullets in five games for Seattle’s first modern-era pro sports championship. The following year the Sonics reached the Western Conference finals for a third consecutive season, but lost to the Los Angeles Lakers in the rookie season of Magic Johnson. Sikma was traded to the Bucks following the 1986 season.

Sikma averaged 15.6 and 9.8 rebounds in 14 NBA seasons. He played in seven All-Star Games, all with the Sonics.

Sikma was among the best shooting big men in NBA history, which included leading the league in free throw shooting (92.2 percent) in 1987-88, the only center to accomplish the feat. He also led the NBA in defensive rebounds in 1981-82 and 1983-84.

Sikma began his coaching career as a Sonics assistant from 2003 to 2007. He moved onto to the Houston Rockets for four seasons, where he tutored Yao Ming. When the Rockets’ head coach, Rick Adelman, moved to Minnesota in 2011, Sikma joined him until 2016.

Since 2017, Sikma has been a coaching consultant in Toronto working with the big men of the Raptors, who are second in the Eastern Conference with a 56-23 record.

Sikma and the Hall class of 2019 will be introduced at U.S. Bank Stadium before the first semifinal game in the Final Four.